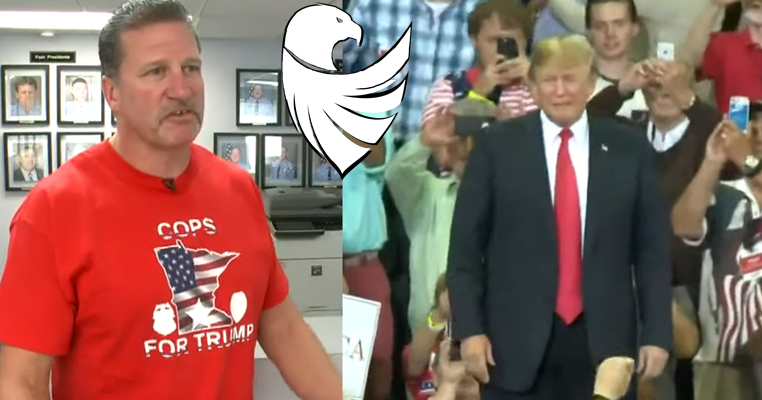 Minneapolis police officers did not let a controversial ban on wearing their uniforms to a Trump rally get them down.

Instead they quickly made plans to swarm Thursday’s rally wearing custom “Cops for Trump” T-shirts.

Per KARE11, when President Trump holds a Minneapolis rally next week, missing from the crowd will be uniformed police, since officers are now not allowed to wear their uniforms to support a politician.

“I don’t want the MPD to be politicized,” said Minneapolis Police Chief Medaria Arradondo. “I did not want those in our communities to feel the MPD was showing any bias or favor towards a particular party or candidate.”

It’s a change from a longtime policy, one reason Bob Kroll of the Minneapolis Police Federation says he’s against it. Kroll says he believes the new rule is only because the president is Republican and disliked by many city leaders. He also says he questions why it came just a week before Trump’s rally.

“We’ve always been allowed to wear our uniform,” said Kroll. “The timing of it is very conspicuous and then (there’s) the fact that they didn’t go through the normal policy change process with this. It’s changed and that’s the end of it.”

Per CBS, ahead of a President Donald Trump rally in Minneapolis and a controversial new uniform policy, the Minneapolis police union is selling a shirt in support of the president.

On Saturday, Lt. Bob Kroll, Police Officers Federation of Minneapolis president, posted a photo of the shirt on his Facebook page and asked for others to share.

The shirts, which say “Cops for Trump,” are being sold for $20 each. The proceeds all go to benefit the police union’s charities.

The policy change came the day after Trump announced he would host a rally in Minneapolis. The head of the local police union argues the ban was a political move meant to favor the city’s Democratic officials. The police department for its part says the policy is about avoiding the appearance of political bias.

But the person who could be most irked by the rule change? The president, who is traveling to Minneapolis on Thursday for his first campaign rally since House Democrats announced an impeachment inquiry against him.

Trump often surrounds himself with men and women in uniform, both in the White House and on the campaign trail. He has has long painted himself as a pro-law enforcement president, ranging from his sharp criticism of NFL player protests during the national anthem over police brutality to the Department of Justice’s slowed pace of civil rights investigations into local police departments.

In February at the Major County Sheriffs and the Major Cities Chiefs Association Joint Conference, he renewed his commitment to law enforcement, vowing to make “officer safety a top priority.”

“In my administration, we understand that reducing crime begins with respecting law enforcement. We will not tolerate smears, or slanders or assaults on those who wear the badge and police our streets,” he said.