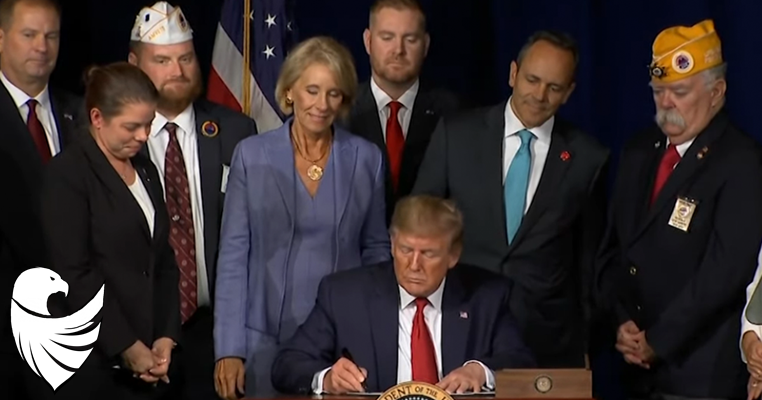 Democrat candidates including Elizabeth Warren and Bernie Sanders are pushing their 2020 platform to include elimination of student debt for all.

Wednesday, President Trump took real action to eliminate student debt for a group that truly deserves help – our disabled veterans who paid the highest price for our country.

The Hill reports President Trump on Wednesday signed a memorandum directing the Department of Education to eliminate all federal student loan debt owed by tens of thousands of severely disabled veterans.

Trump signed the directive following a speech to AMVETS at the organization’s 75th annual convention in Kentucky. The announcement drew applause from those in attendance, including Education Secretary Betsy DeVos.

“Nobody can complain about that, right?” Trump said. “The debt of these disabled veterans will be entirely erased. It will be gone. They can sleep well tonight.”

Trump said the memo will apply to more than 25,000 veterans who are “completely and permanently” disabled. Federal taxes will not be applied to the forgiven debt, he added.

“Veterans … who have made such enormous sacrifices for our country should not be asked to pay any more,” he said.

The president has made his support of the armed forces and veterans a calling card of his campaign speeches. He frequently boasts about the hundreds of billions of dollars in funding Congress has allocated in recent years to the military, and regularly cites initiatives to improve the Veterans Affairs Department.

Trump’s Department of Education has faced criticism, however, for rolling back Obama-era protections for student borrowers.

Sens. Bernie Sanders (I-Vt.) and Elizabeth Warren (D-Mass.) are among the prominent progressives who have pressed for legislation wiping out large swaths of student debt nationwide, arguing it would foster opportunity and combat income inequality.

Trump at one point told attendees that he would refrain from uttering his reelection slogan because the AMVETS appearance was funded by taxpayers and was “not a campaign speech.” But he promptly said he hoped to “keep America great” and touched on a few of topics that regularly come up at his rallies with supporters.

Though he remained mostly on script, Trump recounted withdrawing from the “horrible” Iran nuclear deal, touted the economic boost that comes with manufacturing new military equipment and criticized the “fake news” as he pointed at the press gathered in the auditorium.

Trump praised McConnell as “somebody very special” and pledged to campaign for the GOP leader when he’s up for reelection next year. The president was set to attend a fundraiser for Bevin later Wednesday in Louisville.