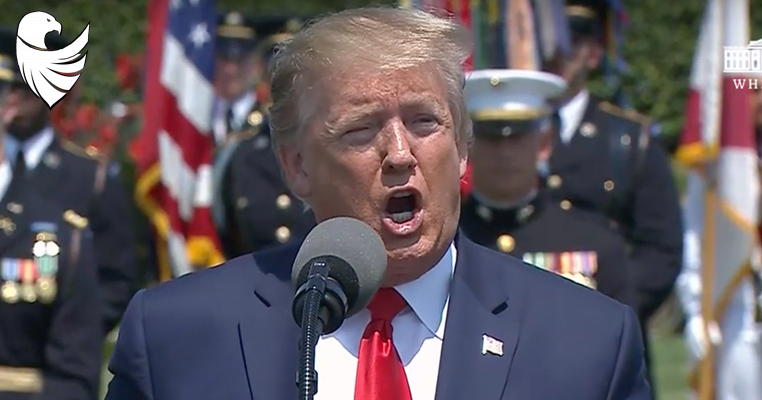 In a series of tweets, President Trump has responded to the Wapo bombshell story alleging a whistleblower has complained that he made promises to a foreign leader.

Per FoxNews, a whistleblower complaint that reportedly involved allegations President Trump made a troubling and unspecified “promise” to a foreign leader touched off a new Washington firestorm on Thursday, as the intelligence community’s top watchdog was questioned by Congress on the matter and the president adamantly denied the accusations.

The details surfaced overnight in a Washington Post report, but many specifics remain unclear including the identity of the foreign leader.

Fox News has not confirmed the report, and White House officials have not offered additional comment on the claims.

Another Fake News story out there – It never ends! Virtually anytime I speak on the phone to a foreign leader, I understand that there may be many people listening from various U.S. agencies, not to mention those from the other country itself. No problem!

Per Wapo, the whistleblower complaint that has triggered a tense showdown between the U.S. intelligence community and Congress involves President Trump’s communications with a foreign leader, according to two former U.S. officials familiar with the matter.

Trump’s interaction with the foreign leader included a “promise” that was regarded as so troubling that it prompted an official in the U.S. intelligence community to file a formal whistleblower complaint with the inspector general for the intelligence community, said the former officials, speaking on the condition of anonymity because they were not authorized to discuss the matter publicly.

It was not immediately clear which foreign leader Trump was speaking with or what he pledged to deliver, but his direct involvement in the matter has not been previously disclosed. It raises new questions about the president’s handling of sensitive information and may further strain his relationship with U.S. spy agencies. One former official said the communication was a phone call

Intelligence Community Inspector General Michael Atkinson determined that the complaint was credible and troubling enough to be considered a matter of “urgent concern,” a legal threshold that requires notification of congressional oversight committees.

But acting director of national intelligence Joseph Maguire has refused to share details about Trump’s alleged transgression with lawmakers, touching off a legal and political dispute that has spilled into public view and prompted speculation that the spy chief is improperly protecting the president.

The dispute is expected to escalate Thursday when Atkinson is scheduled to appear before the House Intelligence Committee in a classified session closed to the public. The hearing is the latest move by committee Chairman Adam B. Schiff (D-Calif.) to compel U.S. intelligence officials to disclose the full details of the whistleblower complaint to Congress. Maguire has agreed to testify before the panel next week, according to a statement by Schiff. He declined to comment for this article.

The inspector general “determined that this complaint is both credible and urgent,” Schiff said in the statement released Wednesday evening. “The committee places the highest importance on the protection of whistleblowers and their complaints to Congress.”

The complaint was filed with Atkinson’s office on Aug. 12, a date on which Trump was at his golf resort in New Jersey. White House records indicate that Trump had had conversations or interactions with at least five foreign leaders in the preceding five weeks.

Among them was a call with Russian President Vladimir Putin that the White House initiated on July 31. Trump also received at least two letters from North Korean leader Kim Jong Un during the summer, describing them as “beautiful” messages.

In June, Trump said publicly that he was opposed to certain CIA spying operations against North Korea. Referring to a Wall Street Journal report that the agency had recruited Kim’s half brother, Trump said, “I would tell him that would not happen under my auspices.”