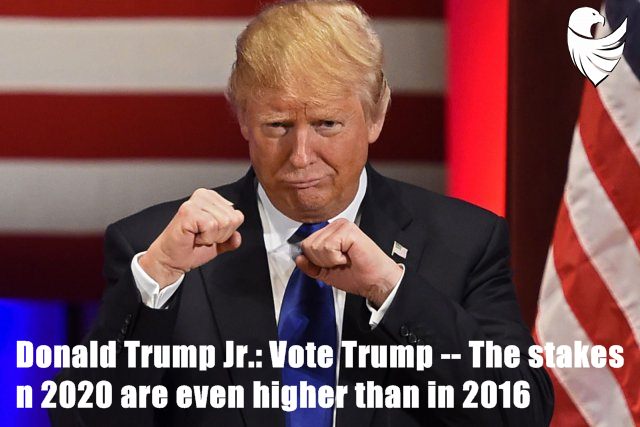 With my father’s official unveiling of his re-election campaign

Tuesday evening, Americans are about to witness another 17-month mudslinging slog to determine the future course of the nation.

The fight is upon us, but before it inevitably degenerates into vicious day-by-day scandal-mongering and ruthless politicking, voters should take stock of what’s at stake next

The 2020 election cycle will feature, if anything, even starker contrasts for the future of this country than 2016’s once-in-a-generation upset did. We are no longer dealing with the party of Hillary Clinton, let alone the party of Bill Clinton. My father and his re-election campaign are all that stand between the prosperous, faithful, and peaceful America of the Trump economic boom, and the revenge-hungry, far-left extremist party of “The Resistance.”

Donald Trump’s victory over Hillary Clinton shocked the Democratic Party to its core. It drove them mad, left them unable to cope rationally, encouraged them to obsess over outrageous Russiagate conspiracy theories, and allowed a previously marginalized radical fringe to become the ideological vanguard of any future Democratic administration.

It’s important for voters to recognize what kind of a country lurks beneath the relentless, cheap attacks on family and country that serve to frame the Democrats’ campaign as a return to “normalcy.”

For instance, virtually every Democrat running for president right now, including the so-called “moderate” ones, would eagerly embark on the march toward open borders. After all, my father’s 2016 victory eliminated all semblance of liberals’ ability to think rationally about immigration.

In a few short years, supporting ever greater numbers of poor illegal immigrants and opposing any serious attempt to enforce existing laws have become articles of faith on the left. America, according to the new Democratic Party, does not belong to Americans. It is “native land” and we have no right to control entry into it.

The modern Democratic Party not only seeks to subvert America’s borders but also actively encourages the subversion of the American economy, the American family and even the American constitution itself.

Worse still, Democrats long for a country that will tolerate absolutely no dissent from their extremist socialist agenda and will do anything to ensure the people who voted for my father are unable to organize again.

Democrats want a country where Catholic high schoolers can be harassed in the street for wearing MAGA hats and then smeared as racist bigots in media, threatened with expulsion, and ruined simply for not immediately giving in.

They want a country where eminent medical professionals and even self-described socialist feminists are banned on social media, the modern public square, for questioning the most radical ideas founded in identity politics.

If you don’t like how they would remake America, you might as well just be yelling into the void. The Democrats will defend their allies in Silicon Valley from any consequences for their sustained, unmitigated campaign to censor all but the most milquetoast of views from the internet.

And if you think our political norms and constitutional system can serve as a check, you could be in for a rude awakening after Democrats pack the courts, let 16-year-olds vote, and offer amnesty to millions of illegal immigrants in order to bolster their electoral coalition, as many of their candidates have already promised to do. They will do their utmost to usher in a socialist era, antithetical to our founding documents, in which the state rations health care and forcibly redistributes wealth in the name of “fairness.”

In short, whatever you think the stakes were in 2016, the unrestrained freefall into far-left extremism upon which the Democrat Party has dived headfirst has redoubled them in 2020.

This is a point of no return election. If you sit this one out, if you let the petty squabbles and barb-throwing of campaign season blind you from the broader struggle for the future of America, not only may you live to regret it, you may never again get the chance to make – and keep – America great.

When my father steps to the podium in Orlando before tens of thousands of energized patriots, it will mark the beginning of a long, arduous path to victory in 2020. It’s a journey with immeasurable consequences for all Americans that we must understand, engage in, and emerge victorious from.