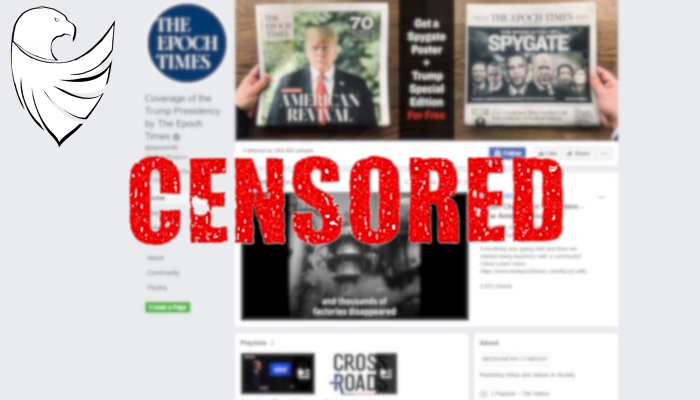 Facebook banned The Epoch Times from future advertising on its platform after reports showed the media outlet broke the company’s rules when it allegedly used sock puppet accounts to purchase pro-Trump ads.

The move came after an Aug. 20 NBC report suggested the outlet shifted its spending recently to conceal $2 million of ads that promoted President Donald Trump. The Epoch Times published ads that appeared under page names such as “Honest Paper” and “Pure American Journalism,” which allowed the outlet to avoid Facebook’s rules, reports show.

Neither “Honest Paper” nor “Perpetual Market,” another page the outlet used, list Epoch Times as its page owner.

The Epoch Times spent more than $1 million on nine ad buys supporting the president, among a host of conspiracy theories. The ad buy was more than presidential candidates Sens. Kamala Harris of California and Elizabeth Warren of Massachusetts spent on Facebook over a three-month period of time, OZY reporter Nicholas Fouriezos noted in a pair of Aug. 22 tweets.

“Over the past year we removed accounts associated with the Epoch Times for violating our ad policies, including trying to get around our review systems,” a Facebook representative told reporters Thursday. “We acted on additional accounts today and they are no longer able to advertise with us.”

Facebook has not responded to the Daily Caller News Foundation’s request for comment about the nature of the ads and whether they bear similarity to those Russian trolls produced before the 2016 election.

NBC News Aug. 20 report laid out how The Epoch Times evolved from a nonprofit backed by a Chinese-American religious movement’s anti-communism message into an obscure conservative outlet pushing Trump. The outlet remained outside mainstream conservative circles because it focused on specific political issues regarding China, the report noted.

NBC reporter Brandy Zadrozny, who co-authored the NBC News article, said in a series of Aug. 22 tweets that “we contacted The Epoch Times to ask about the >$1 million they had spent on pro-Trump, conspiracy-embracing ads. In July, they stopped running ads under their actual names.”

The company then began creating new “sock companies that claim to pay for the ads,” she added. The Epoch Times publisher Stephen Gregory issued a statement to NBC stating that the report “grossly misrepresents” the outlet’s advertising.

“Facebook has specific rules for advertising that require everyone — including publishers like The Epoch Times — to label content as political advertising if it touches on social issues or politics, something some news content naturally does,” he noted in a statement on the outlet’s website.

Gregory added: “Many other media run advertising campaigns for their content and products in the same category on Facebook.”

Facebook, for its part, has dealt with groups using what appear to be sock puppet accounts to hide their connections with advertisement campaigns.

Reports from January show that Russia might be using its state-run media to create fake posts that appear to emanate from real newsrooms elsewhere. The company dinged 364 pages and accounts from the Baltics, central Asia, the Caucasus and other countries in central and Eastern Europe.

The groups responsible for the pages also spent $135,000 on ads, which were paid for in euros, rubles and U.S. dollars. Facebook also claimed it nixed pages from a separate campaign originating from Russia and Ukraine. The company removed 26 pages, 77 accounts and four groups on the platform, as well as 41 accounts on Instagram.

Those behind the campaign bought around $25,000 in ads on Facebook and Instagram that were paid for in rubles. Democratic operatives used a series of advertisements before the 2018 midterm elections to troll conservative voters inside Alabama.

The pages were designed to create the impression that they were operated by frustrated conservatives.