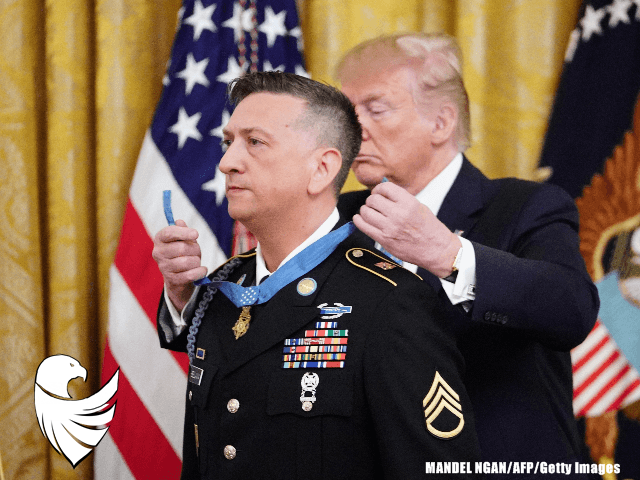 As Medal of Honor recipient and former Army Staff Sgt. David Bellavia, 43, is asked at a Pentagon briefing to recall what happened the night of November 10, 2004, in Fallujah, Iraq, he describes the chain of events in a matter-of-fact way, as if he did no more than what he was supposed to do.

But witnesses say he is being far too modest for a man who mustered the courage to face down six to eight terrorists to save an entire squadron almost single-handedly, at one point using his helmet and a knife to kill the enemy in close combat.

“David is so embarrassingly modest at the moment. And he’s so awash with humility that he wants to talk about everybody else except for him,” Australian journalist Michael Ware, who witnessed the entire fight while embedded with Bellavia, told Breitbart News.

President Trump awarded Bellavia the Medal of Honor during a White House ceremony on Tuesday afternoon for his actions in Fallujah, one of the deadliest battlegrounds for U.S. troops during the Iraq War.

“Today, it’s my privilege to award the highest military honor to an American soldier who demonstrated exceptional courage to protect his men and defend our nation,” Trump said. 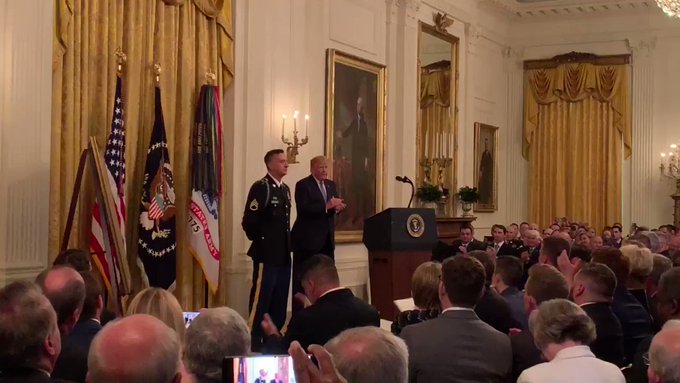 .@realDonaldTrump asks everyone to join him in welcoming Medal of Honor recipient @USArmy SSG David Bellavia:

According to the official narrative, Bellavia’s platoon was tasked to clear a block of 12 buildings, where the six to eight insurgents were hiding. A Bradley Fighting Vehicle’s 25mm cannon malfunctioned, so they would have to kill or capture the insurgents without it.

“These six to eight suicidal jihadis had hidden in this block of residential houses. They had escaped one firefight and had disappeared into this block of houses at nighttime. Fortunately, the military was able to seal those houses off. So we knew there were at least six to eight of these suicidal blokes in one of these houses but we didn’t know which one,” Ware said.

Ware said it was pitch black, with no electricity. “Just these long hours of searching in the dark, knowing that they’re there somewhere, and eventually we’re going to hit the house that they’re in, we’re just not going to know which one,” he said.

From around 7 p.m. to midnight, they went through nine buildings. Then, they went into the tenth.

After they entered, machine gun fire burst from the front hallway — two insurgents were hiding under a stairwell for them. More insurgents opened fired from a window, and the soldiers were trapped. “Bullets were tearing through the walls,” Ware said.

Shattered glass cut the faces of two soldiers, and a bullet grazed the stomach of another. Bellavia exchanged his weapon with an M249 SAW gunner and stepped into the hallway and opened fire, forcing the insurgents to take cover and allowing his men to get out of the building.

Ware said everyone then took cover in two abandoned houses across the street. But then he saw Bellavia, pacing back and forth in the street “like a caged tiger.”

Ware said he stood there with his arms crossed, waiting for Bellavia to stop pacing. “So he finishes pacing, and he looks up and finds me and says, ‘F-ck it.’ And I look straight back at him and went, ‘F-ck it,’” he said. “I knew David was going back inside that house.”

Bellavia called for another Bradley Fighting Vehicle for support. He put two SAW gunners and another soldier in the courtyard, while he, Staff Sgt. Scott Lawson, and Ware entered the building.

Bellavia heard insurgents whispering from another room. He told Ware to run if anything happened. Bellavia entered the room and opened fire at the insurgents, but fell back after receiving return fire. Bellavia reentered the room by himself, spotted an insurgent loading an RPG launcher, and killed him. A second insurgent fired his machine gun at Bellavia, but Bellavia wounded him before he fled into a kitchen.

Inside the building, Bellavia and Lawson, exchanged gunfire with the wounded insurgent. When Lawson ran low on ammunition, Bellavia told him to leave and bring back another M16 and a shotgun. During that time, Bellavia noticed there was another room that had not been cleared.

As he entered that room, another insurgent ran down the stairs and began firing at him. He found cover against a wall. He could hear screams from upstairs and from the room he had just entered.

The wounded insurgent in the kitchen then ran out, blindly firing an AK-47. Bellavia shot and killed him. The insurgent on the stairs began firing at him again, but Bellavia was able to eliminate him as well.

Suddenly, another insurgent leapt out of a wardrobe and began firing. Bellavia used the wardrobe, which had fallen to the floor, as cover and fired on the insurgent, wounding him. The insurgent picked himself up and ran upstairs.

Bellavia then followed the blood trail up the stairs. He heard the insurgent in a room. Bellavia tossed a grenade into the room, knocking the insurgent onto the second-story roof. Seriously wounded, he tried to give away Bellavia’s position.

Bellavia, exhausted, then took off his helmet and waited for other soldiers to arrive. As he smoked a cigarette, another insurgent jumped from the third-story roof to the second story, landing three feet from Bellavia. His legs buckled and he dropped his weapon. Bellavia wounded him with his M16, but after the insurgent raised his weapon, Bellavia emptied the rest of his magazine into him.

Ware provided additional details of what happened in that “death house.”

“They were laying in wait. One jumped out of a cupboard, one jumped out of the ceiling, and the last one — he couldn’t use his weapon in that room because there were all these propane tanks…so he couldn’t shoot the final jihadi — he had to kill him with his bare hands,” he said.

“That last room, he knew he couldn’t fire his weapon because it’d blow up,” he said. “He had to use his helmet and his combat knife to kill this last jihadi.”

“Bang, bang, bang,” Ware said, gesturing what Bellavia did with his helmet. “Then he eventually got his combat knife and –,” Ware trailed off. “He really deserves the Medal of Honor.”

Bellavia will be the first living recipient to receive the Medal of Honor for the Iraq War.

“America is blessed with the heroes and great people like Staff Sergeant Bellavia whose intrepid spirit and unwavering resolve defeats our enemies, protects our freedoms, and defends our great American flag,” Trump said at Tuesday’s ceremony.

“David, today we honor your extraordinary courage, we salute your selfless service, and we thank you for carrying on the legacy of American valor that has always made our blessed nation the strongest and mightiest anywhere in the world.”

← Maxine Waters Sides with Iran on Drone Controversy and AGAINST the U.S. Pentagon ← Turns Out Migrant Detention and Border Control Under VP Biden Included Tear Gas and “Cages”