The dozen-plus names being floated to replace John Bolton as national security adviser run the gamut — from ambassadors to military officers to business leaders.

Some are quietly fanning the speculation themselves while others are names that people close to President Donald Trump say he has mentioned. Several are hard to distinguish on an ideological basis, although all are thought to be generally conservative and some make their views well-known on Fox News. A few have links to Bolton, a hawk whose approach often clashed with the president, and several previously served in the George W. Bush administration. Nearly all are men.

The leading assumption is that Trump will seek a National Security Council chief who is lower-profile, less ideologically strident and more willing to be a team player than the ousted Bolton, who irked numerous aides across the national security apparatus. Trump also is expected to go with a pick favored by his powerful secretary of State, Mike Pompeo, who remains in Trump’s good graces.

The choice — which Trump said he’ll reveal next week — may signal the direction he hopes to take his foreign policy in the coming election year, including whether he’ll keep up his push for deals with Iran, North Korea and the Taliban.

But in the end, Trump, as he has long done, will likely make a decision based on gut instinct and an inscrutable set of criteria that is not necessarily tied to ideological compatibility.

“He definitely wants a ‘yes person,’” said Thomas Wright, a foreign policy analyst with the Brookings Institution who has closely watched Trump’s national security moves. “He doesn’t want someone who’s going to tell him he can’t do what he wants to do.”

To start, there are the names that one person close to the White House said Trump has brought up this week.

Two are top aides to Pompeo: Brian Hook, who deals with Iran, and Stephen Biegun, who deals with North Korea. The other two are Fred Fleitz, a former intelligence official and Bolton aide whom Trump likes; and Paula Dobriansky, who has years of experience at both the NSC and the upper echelons of the State Department during past Republican administrations.

Trump himself on Wednesday indicated that he had “five people that I consider very highly qualified, good people I’ve gotten to know over the last three years.”

The person close to the White House said Trump is not showing a sense of urgency in picking anyone just yet, despite his stated plan to reveal his choice next week. But Trump is making it clear he wants his pick to be someone with whom he is already comfortable.

“He’s looking for somebody who’s loyal, that he already knows, someone who’s experienced and doesn’t need the training,” the person said, adding that Trump also prefers someone who either has or can easily get a security clearance.

Biegun in particular is highly regarded in Washington, even though he’s struggled to make progress in persuading the North Koreans to sit down for serious talks on their nuclear program. Biegun has extensive government and private sector experience, and he served as executive secretary of the NSC during the George W. Bush administration.

Hook has become a visible figure because of his role driving the administration’s harsh policies toward Iran, although for a long time Trump reportedly had no idea who he was. Hook is also a favorite of Jared Kushner, Trump’s son-in-law and adviser. 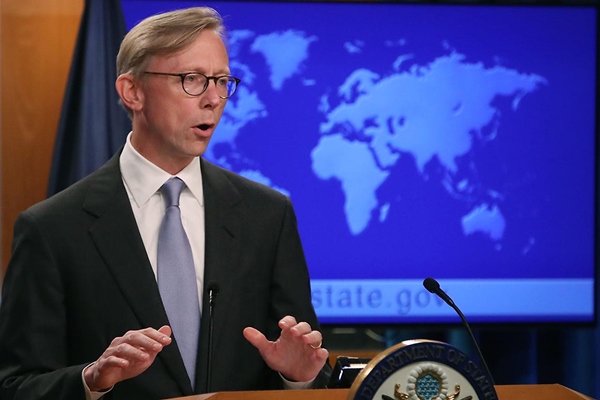 However, Hook is a subject of an inspector general’s investigation into allegations that he engaged in political retaliation against career government staffers at the State Department. The inspector general’s report is due out soon and could find fault with Hook’s actions. If so, his elevation to national security adviser will infuriate career staffers who want to see him disciplined.

Dobriansky isn’t in the Trump administration but has discussed various roles in the past. She’s well-regarded in Washington, and would likely carry a lower profile than Bolton if she got the role.

Fleitz would bring an intelligence background to the job — but also a close link to Bolton. A former CIA analyst, Fleitz briefly served as Bolton’s chief of staff until fall 2018, when he left to serve as president and CEO of the Center for Security Policy, a right-wing think tank that has been sharply critical of “radical Islam.”

Then there’s a group of names that Washington insiders have been circulating since Bolton’s ousting on Tuesday.

Then there’s some wilder cards.

Pete Hoekstra, a former Republican chairman of the House Intelligence Committee and now the U.S. ambassador to the Netherlands is in the mix, as is Robert Kimmitt, a former senior Treasury Department official.

Two other administration officials also are in the conversation, including one top national security staffer to acting chief of staff Mick Mulvaney, Rob Blair, and another senior NSC official, Matt Pottinger, who deals with Asia.

A former State Department official who knows several of the people being mentioned as potential Bolton successors noted that many have served in uniform, but stressed that didn’t mean they would simply agree with Trump on every issue.

Trump is known for being mercurial when it comes to policy and personnel. But throughout his presidency, he’s repeatedly indicated he prefers negotiations to military conflict and that he wants to reduce the U.S. troop presence in countries like Afghanistan.

With the 2020 election looming, Trump has little success to show on the foreign policy front, and he appears eager to change that narrative. He wants to launch or keep up negotiations with Iran and North Korea — both of which Bolton opposed. And although Trump has said the peace talks with the Taliban are “dead” for now, he could try to revive them.

Trump is fine if his aides present opposing views, say people who know the president. But after nearly three years in the White House, he’s come to value the importance of having a team that is unified behind him once he’s made a decision.

Trump’s frustration with Bolton stemmed largely from his belief that the national security adviser was using the media and other means to undermine the president if he didn’t agree with his choices, the person close to the White House said. Pompeo offers a contrasting model that has earned Trump’s esteem; he may disagree with the president in private, but never in public.

There are some rumors that Trump might consider naming Pompeo as national security adviser while also keeping him as secretary of State. It’s not unprecedented: Henry Kissinger once held both roles concurrently.

But national security veterans said a more likely route is that Trump will select someone who already works well with Pompeo, such as Biegun or another State Department player.

Either way, Trump will want someone with strong political instincts at the helm of the NSC going into his reelection campaign.

“All of this has a political dynamic to it, so I think he will be sensitive to that,” Wright said.

Daniel Lippman contributed to this report.