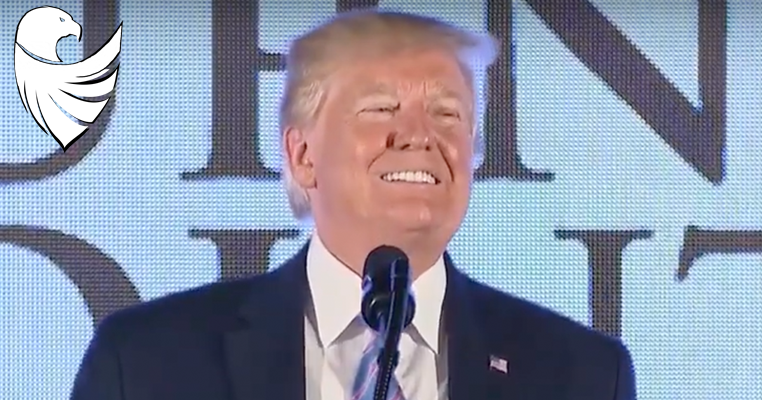 On Monday, President Trump unveiled new plans to implement changes designed to take into consideration the potential self-sufficiency of migrants hoping to obtain citizenship in the United States, a move set to keep US benefits for US citizens.

As the White House released information on social media relating to the new move, the acting Director of US Citizenship and Immigration Services, Ken Cuccinelli, gave a press conference detailing the administration’s goals.

The new “public charge” rule will take into account immigrants’ use of public assistance programs over 1-3 years, to determine whether those individuals are relying on benefits or are capable of taking care of themselves.

Benefit programs such as welfare, SNAP, food stamps, Section 8 housing and other housing programs, Medicaid, and others will all be considered by USCIS officers in determining whether immigrants should warrant permanent citizenship in the United States.

A “public charge” typically refers to an individual who is “primarily dependent on the government for subsistence,” which, until the new rule’s expansion of other benefit programs, typically included only those receiving “public cash assistance.”

Now, with the new changes set to go into effect in the next 60 days, other benefit programs will also be taken into consideration in an effort to curb welfare abuse by migrants, while ensuring availability to US citizens seeking assistance.

However, the new changes actually stem from Clinton-era laws, the Personal Responsibility and Work Opportunity Reconciliation Act and the Illegal Immigration Reform and Immigrant Responsibility Act, passed in 1996, designed to exploitation of public benefits by illegals.

At the time of the passage of those bills, Congress declared illegal aliens and migrants should “not depend on public resources to meet their needs,” something that nearly 75% of Americans have agreed with.

In a statement, the White House outlined the need for the implementation of the new policy, stating “We must ensure that non-citizens do not abuse our public benefit programs and jeopardize the social safety net needed by vulnerable Americans.”

“Large numbers of non-citizens and their families have taken advantage of our generous public benefits, limited resources that could otherwise go to vulnerable Americans,” explained the White House.

JUST ANNOUNCED: President @realDonaldTrump will enforce a Clinton-era law to ensure that non-citizens do not abuse our public benefit programs and jeopardize the safety net needed by vulnerable Americans. https://t.co/UrZF4mCP6Q

Self-sufficiency has been a core principle of our immigration laws for generations. It's reflected in bipartisan legislation passed by Congress and signed by President Clinton in 1996.

And thanks to President Trump, today it is finally being enforced.https://t.co/UrZF4mCP6Q pic.twitter.com/bKcG3PpVuB

Speaking on Monday, USCIS acting Director Ken Cuccinelli said Trump “delivered on his promise to the American people to enforce long-standing immigration law, by defining the public charge inadmissibility ground that has been on the books for years.

In a later statement, an unidentified USCIS official stated “Under our final rule, a public charge is defined as an alien who receives one or more designated public benefits for more than 12 months in the aggregate, within any 36-month period.”

However, under the new rule, refugees and asylum seekers will be exempt, and will still be allowed to continue supporting themselves using government benefits paid for by the US taxpayer.

.@USCISCuccinelli: "President Trump's Administration is reinforcing the ideals of self-sufficiency and personal responsibility, ensuring that immigrants are able to support themselves and become successful here in America." pic.twitter.com/gb1OKdMmj7

While opponents of the new move have denounced the Trump administration’s plans as being anti-immigrant, the very clear and abundant presence of the abuse of welfare and other public assistance programs is undeniable.

In the 2018 fiscal year, the Office of Inspector General for Texas Health and Human Services found over $1 million dollars in SNAP food assistance fraud in the state of Texas, alone.

American citizens, who have themselves abused welfare programs for years, have been routinely denied assistance in favor of migrants, leading to a growing resentment from US voters across all walks of life.

With no shortage of examples of welfare fraud and manipulation of the system, President Trump’s new rule is taking the fight directly to the abusers, and making it easier to determine who is likely to abuse the programs.

As hundreds of thousands of immigrants enter the country each year, US citizens have grown increasingly weary of the apparent ease in which they are able to receive taxpayer-funded government assistance.

By ensuring future migrants and would-be citizens are self-sufficient, President Trump and his administration are directly looking out for the American people who have been stuck with the bill for years.

Now, with the new rules set to go into effect shortly, the Trump administration is definitively expanding their efforts to curb abuse of the system from migrants, while deterring those looking to enter the USA in hopes of living off taxpaying citizens.

← BREAKING: Scaramucci Claims Trump May Need to be Replaced for 2020 ← OUCH! Houston Paper Calls for Beto to Drop Out of the 2020 Race