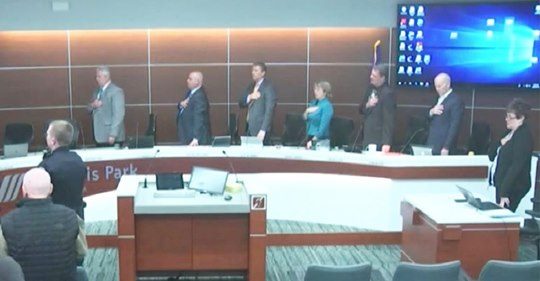 St. Louis Park, MN – The St. Louis Park City Council voted to drop the Pledge of Allegiance from their meeting agenda out of fear that the tradition was scaring away new residents in their community. “Unfortunately, some of us feel like patriotism has been so politicized that it’s almost used as a weapon against people,” St. Louis Park City Councilman Tim Brausen told the Star Tribune. Councilwoman Anne Mavity said that about half the cities in Minnesota don’t use the pledge at city council meetings when she proposed the measure. But a fact check by the Star Tribune found that in the metro area, only Minneapolis and Edina had dropped the Pledge of Allegiance.

The St. Louis Park City Council voted 5 to 0, with little discussion about the measure, at a meeting on June 17. St. Louis Park Mayor Jake Spano missed the meeting and the vote, but said that if he had been there, he would have voted against doing away with the Pledge of Allegiance.

“While I’ve never been a fan of doing things just because that’s the way things have always been done, I’ve always used the last six words [of the pledge] — ‘With liberty and justice for all’ — as a reminder to me that we need to make our community more open and welcoming for all our neighbors, not just a select few,” Spano said.

We from conservatives publish Facebook content on the basis of paragraph 2.4 of the Statement of Rights and Responsibilities on Facebook: “When posting content or information using the” public “setting, this means that you allow anyone, including anyone outside of Facebook, access to and use this information, and link it to you (for example, with your name and profile photo).