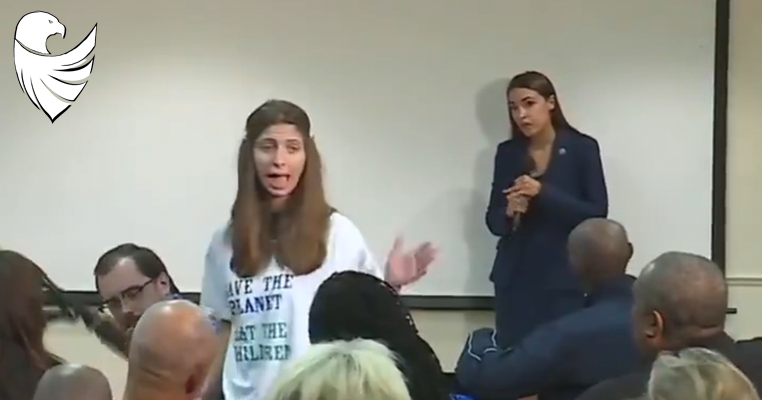 As some expected, the viral clip of a woman having an outburst during an AOC town hall meeting turned out to be a set up.

One of Ocasio-Cortez's constituents loses her mind over climate change during AOC's townhall, claims we only have a few months left: "We got to start eating babies! We don't have enough time! … We have to get rid of the babies! … We need to eat the babies!" pic.twitter.com/uVmOnboluI

Don Jr. had commented “Seems like a normal AOC supporter to me.”

Seems like a normal AOC supporter to me. https://t.co/NWVMRD0wsl

Wapo reports for most of Rep. Alexandria Ocasio-Cortez’s Thursday town hall, the woman in a black jacket sat quietly in the third row. Then, as the event in Corona, New York, neared its end, the woman suddenly stood up and began yelling about climate change.

“But we’re not going to be here much long because of the climate crisis,” the woman blurted. “We got to start eating babies,” she abruptly declared, taking off her jacket to display a T-shirt that read, “Save the planet. Eat the children.”

The woman’s bizarre speech swiftly became the center of a heated Twitter fight Thursday night that pitted Ocasio-Cortez, D-N.Y., against President Donald Trump, his son, Donald Trump Jr., and other conservatives, who suggested the woman was an example “climate change hysteria.” In response, Ocasio-Cortez chastised critics for trying to “mock or make a spectacle” of a woman who “may have been suffering from a mental condition.”

It now seems likely that the scene was carefully planned.

The woman was apparently part of an attempt by a right-wing fringe political group to embarrass the Democratic congresswoman. Late Thursday, a Twitter account belonging to the LaRouche PAC – which was founded by conspiracy theorist Lyndon LaRouche Jr. – claimed responsibility for the stunt. A historian who has documented the organization said the woman’s outburst was “a fairly well-established tactic for them.”