FAYETTEVILLE, N.C. — President Donald Trump traveled here on Monday for an election-eve rescue mission in a neck-and-neck congressional race — and to boost his own standing in a key 2020 swing state.

But Trump had his own reelection bid on his mind when he took the stage for the rally in the Crown Expo Center. North Carolina’s 15 electoral votes are critical for the president’s campaign for a second term; he won the state by less than 4 percentage points in 2016.

After recounting his 2016 election victory and his accomplishments after 2½ years in the White House, Trump stressed the importance of next year’s presidential race.

“We had a very, very special day in 2016,” he told the crowd of thousands early in a speech that lasted well over an hour. “It was very special, very special. … 2020 is essentially just as important, because they’ll try to take it away.”

Bishop, a GOP state senator, is tied in the polls with Democrat Dan McCready in Tuesday’s race. And the Republican was counting on the president — along with Vice President Mike Pence, who campaigned for Bishop in another part of the district earlier on Monday — to carry him across the finish line, telling POLITICO over the weekend that the two would “put us over the top.”

“You have a Democrat named Dan McCready, and he wants open borders,” Trump said at the rally on Monday night. “He wants sanctuary cities. He’s not going to protect your Second Amendment.”

He added later: “Tomorrow, we take the first steps to firing Speaker [Nancy] Pelosi and winning back the House in 2020.” 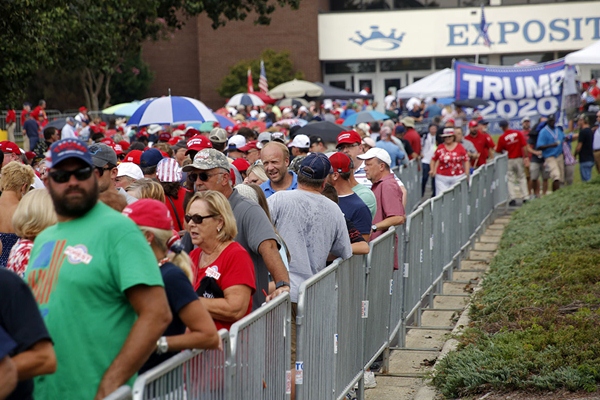 Still, the closeness of the congressional race — held in a district Trump won by 12 percentage points in 2016 — is an ominous sign for his reelection hopes and could suggest that the political environment has not improved since the 2018 midterms, when the GOP lost 40 House seats.

The race between Bishop and McCready could make it 41 Democratic pickups: Last November, McCready appeared to lose the race by only 905 votes. But the State Board of Elections threw out the results after uncovering credible evidence of alleged election fraud linked to Republican Mark Harris’ campaign, and it ordered a new election. Harris decided not to continue his candidacy.

The rally came as Trump plans to increase his campaign efforts after a summer that saw worries about a possible economic slowdown amid failed trade talks with China and a growing list of foreign policy shortfalls, from scuttled peace talks with the Afghan Taliban to nuclear negotiations with North Korea.

And it came after he spent much of the past week trying to prove that he was correct when he said Alabama might be affected by Hurricane Dorian — even as North Carolina’s coastal areas were suffering from the storm.

Trump mentioned the storm and the recovery efforts in North Carolina early in his speech, adding that Dorian hit North Carolina harder than any other state. But he didn’t reference the Alabama controversy in his remarks.

Trump and his aides have grown increasingly concerned about the economy — his strongest reelection talking point — amid signs that a downtown may be on the way. Still, the Trump campaign focused on its strength when touting the president’s record here.

“President Trump has transformed the economy of North Carolina, creating more than 175,000 jobs in the state since he was elected,” said Michael Glassner, the campaign’s chief operating officer.

Trump’s rallies are often more about him than those he is endorsing — and he touted his accomplishments, including money he secured to build a wall on the southern border, while using the platform, as he always does, to go after Democratic rivals and perceived slights.

On Monday night, the arena appeared full, with many people standing and waving signs with slogans like “Keep America Great” and “Women for Trump.” Many wore red “Make America Great Again” hats.

Trump’s last rally in North Carolina was in July in Greenville, where he went after four freshman Democratic House members — the “squad” of Reps. Alexandria Ocasio-Cortez of New York, Ilhan Omar of Minnesota, Ayanna Pressley of Massachusetts and Rashida Tlaib of Michigan — and suggested they leave the country, even though all are U.S. citizens. “Send her back,” the crowd responded, referring to Omar, who is Muslim. Trump later denounced the chant.

Monday night’s rally was part of a multipronged effort from the Trump team to boost Bishop. Earlier in the day, Pence was in the Charlotte suburbs, speaking at an event with Bishop and dropping into a makeshift call center at a local hotel. The vice president also had lunch with Bishop at a barbecue restaurant. He made the 100-mile trip east to join Trump at the rally in Fayetteville, a military-heavy community anchored by nearby Fort Bragg.

“I’m here because we need Dan Bishop,” Pence said at the rally. “And he’s going to partner with this president every step of the way. Dan Bishop supports lower taxes, more jobs, a secure border — and Dan Bishop stands for the right to life.”

Trump’s campaign also donated the maximum amount of $2,000 to Bishop’s campaign, helped with online fundraising and, according to a Trump campaign official, participated in five fundraisers, including two with Pence; one with Pence’s wife, Karen; one with Mick Mulvaney, the acting White House chief of staff; and one with the president’s eldest son, Donald Trump Jr.

Before leaving the White House for North Carolina, the president called Bishop “a great gentleman, a great man,” and said his backing was helping the candidate.

While rally attendees were gathering Monday afternoon outside the expo center, McCready — the Democratic candidate and a Marine veteran — was also in Fayetteville, for an event with veterans and other supporters who planned to canvass for him that day.

McCready told reporters that Bishop was bringing “everyone and their mother” into the district to bail him out. Asked by a reporter to respond to Trump’s past characterization of him as “weak on Crime, Military & Vets,” McCready cited his military service, including as a platoon leader in Iraq in 2007.

“There’s only one person in this race who’s served our country in uniform, who’s actually fought terrorists, who’s already fought to keep our country safe,” McCready said. “And it ain’t Dan Bishop.”

Monday’s rally was Trump’s second campaign event in the state in the past three months. The July rally in Greenville was held in the state’s 3rd Congressional District, which is also hosting a special election on Tuesday after the death of the incumbent Republican, Rep. Walter Jones, in February. Republican Greg Murphy is heavily favored to win the seat in the district, which Trump carried by 24 points in 2016.

Trump introduced both Bishop and Murphy at the rally. Bishop, who says he intends to be a “vocal” Trump defender in Congress if elected, called the president the “greatest fighter ever to occupy the White House.”

During Bishop’s brief remarks, a supporter appeared to faint in the crowd, and Trump stepped to the mic to call for a doctor.

By STEVEN SHEPARD and ANITA KUMAR