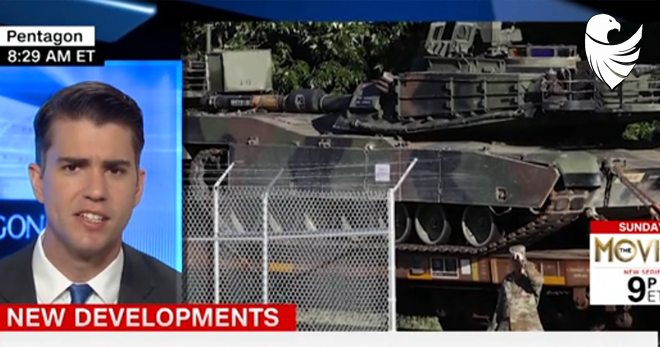 Tanks have been spotted in the D.C. area, in preparation for President Trump’s big Fourth of July celebration.

Including tanks in the 4th of the July celebration has drawn the ire of many Trump critics.

The New York Times reported that President Trump said on Monday that the Pentagon would put military tanks on display on Thursday in Washington as part of his plans to turn the annual Fourth of July celebration in the nation’s capital into a salute to the country’s military prowess.

The tanks will join an airborne display of the nation’s firepower, including a flight of Air Force One over Washington and a performance by the Navy’s Blue Angels jets. Mr. Trump, who is to speak at the celebration, has requested that the chiefs for the Army, Navy, Air Force and Marines stand next to him as aircraft from each of their services fly overhead and their respective hymns play on loudspeakers.

“It’ll be like no other — it’ll be special, and I hope a lot of people come,” Mr. Trump told reporters in the Oval Office. “We have some incredible equipment, military equipment, on display — brand-new. And we’re very proud of it.”

President Donald Trump isn’t taking “no tanks” for an answer on the Fourth of July.

He said Monday that a display of U.S. military tanks will be part of a special event he’s headlining July 4 in Washington, D. C., and photographers have spotted at least two M1A1 Abrams tanks and two Bradley Fighting Vehicles on flatcars in a railyard at the southeastern edge of Washington.

Military police were guarding the vehicles, which were visible to passers-by on nearby paths.

A U.S. official told the AP that the military vehicles to be used in the July 4 event were being stored at the railyard.

Trump had wanted a military parade of tanks and other equipment in the District of Columbia after he witnessed a similar parade on Bastille Day in Paris in 2017 . That plan eventually was scuttled, partly because of cost, though Trump apparently held on to the idea.

Local officials also had objected because of the damage the heavy armored tanks could do to city streets.

“We’re going to have some tanks stationed outside,” Trump said Monday from the Oval Office, appearing to acknowledge local officials’ earlier concerns.

He offered no specifics on where the vehicles would be located.

Sherman tanks were the tank most widely used by the U.S. during World War II, but they have been out of service for decades. The M1A1 Abrams tank is currently the main U.S. battle tank.

Two M1A1 Abrams tanks and two Bradley Fighting Vehicles will be on display as part of Trump’s “Salute to America” event, according to a U.S. official who spoke on condition of anonymity because details of the exhibits have not been made public.