INDIAN WELLS, Calif. — With their dominance dissolved in once-storied bastions like Orange County and ranks reduced to third party status, California Republicans this weekend gathered to reboot and forge strategy for a 2020 comeback — in a solidly blue state where President Donald Trump is wildly unpopular.

The president’s high disapproval ratings in the state failed to dampen the mood of the more than 1,000 California Republicans who descended on the toney Renaissance Indian Wells Resort and Spa starting Friday for what was billed as a special “Training Convention.” The idea was to get inspiration and soak up strategy from Trump insiders and surrogates including campaign manager Brad Parscale, Energy Secretary Rick Perry, and former Wisconsin Governor Scott Walker.

Attendees could choose from no fewer than 35 different sessions on subjects ranging from “Engaging Hispanic Communities” to “Surviving on Liberal College Campuses,” with at least five “Trump Victory Leadership Initiative” classes designed to teach field organizing, volunteer recruitment, the mechanics of “ballot harvesting,” and introduce new tools for voter registration.

The crowd of hardcore Republican loyalists on hand, many snapping up “Trumpifornia” tee shirts, MAGA hats and taking pictures with life-sized cutouts of the President, cheered promises from the party’s top brass that their efforts would “help us grow our California Republican Party while also supporting the president from in-state.”

Parscale, greeted with a standing ovation and excited cheers before speaking to hundreds of excited convention delegates, assured California Republicans of their critical role in the 2020 campaign.

“Many of you are worried that we have written you guys off — that California doesn’t matter,’’ he acknowledged. But, recognizing it as hardly “a swing state,’’ Parscale still pointed to California — a bastion of fundraising, voter contact operations and volunteer firepower — as a lynchpin in “the fight for the future of this country,’’ he said, predicting that “the Trumps will be a dynasty that lasts for decades.”

He also wouldn’t respond to reporters’ questions about whether the president would campaign for candidates in California. 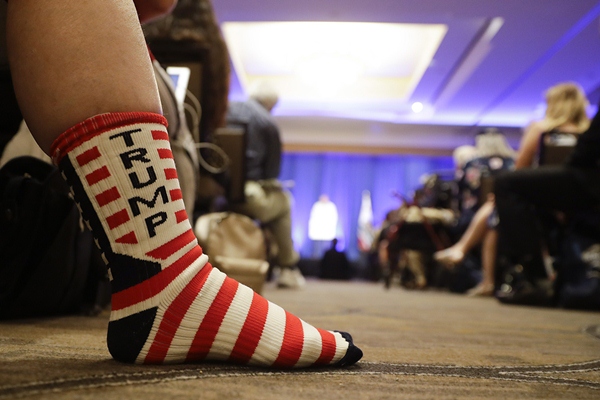 In his speech, Parscale promised GOP loyalists that the Trump Victory Leadership Initiative here would marshall highly sophisticated technology, including use of artificial intelligence which he said would provide more information than ever before on “who the voters are, where they live, how they consume information — and how to contact them.”

“We have the potential to win back eight Congressional seats back to Republicans here in California,’’ Parscale said. He noted that effort alone could bring 50 paid staff to the state in 2020, making it potentially “the largest election day operations’ in state history.

Still, he advised GOP loyalists that regarding the party’s future, “the answer is not me — it’s you.”

“You’re the California GOP,’’ he said. “There’s no trick I can do on my laptop that you can’t do yourselves. It takes hard work, and talking to your neighbors. And with a strong leader with President Trump at the helm — the sky’s the limit.”

Jessica Millan Patterson, the Latina mother of two who was elected earlier this year to chair the embattled state GOP, called the scope of the party’s training efforts “historic” and said California’s Republican Party is now heavily invested in “engagement” — she rejects the word “outreach” as insufficiently energizing — in an acknowledgment that party must return to the drawing board to attract fresh blood for what she called a “California Republican Comeback.”

“It’s infrastructure…new message, new messengers,’’ Patterson said. “If we don’t have a good foundation, we’re not going to be able to build on top of it.’’ Already, she’s celebrating a payoff, telling delegates this weekend that “we’ve recruited 20,000 new volunteers,’’ doubled the party’s grassroots email and reached 1.4 million voters — in the last month alone.

Education researcher and former Bush adviser Bill Evers, looking around the room at the smiling faces after party faithful heard upbeat stump speeches from a crowd of House candidates from Orange County — a former GOP bastion that this year became majority Democratic — said that the optimism was contagious.

“This is a party in pretty good spirits,’’ he said. “This is not a party that feels down…they think the quality of their candidates is good, they’re raising money — and the fight is on. They want to turn this thing around.”

But the state GOP’s efforts come at a time when the party faces formidable roadblocks. Polls show Donald Trump is historically unpopular with voters here, and he has been the subject of nearly 60 lawsuits from state leaders challenging his moves on issues ranging from auto emissions to immigration.

The GOP reboot is particularly challenging coming on the heels of a 2018 midterm meltdown in which the party lost 7 House seats, and where Democrats regained supermajorities in both houses of the state legislature, and won every statewide seat, including the governorship.

For party leaders and grassroots volunteers alike, a key goal of this weekend’s session is to lay the groundwork to retake those House seats — and, Patterson noted, to install House GOP Leader Kevin McCarthy of Bakersfield in the Speaker’s seat.

Despite the convention’s overwhelmingly pro-Trump mood, a few veteran party outliers this weekend lamented that, in California — birthplace of the Reagan Revolution — the Grand Old Party has diminished itself and dragged down its future prospects by rallying behind Trump.

Assemblyman Chad Mayes, R-Yucca Valley, who has repeatedly warned his party against what he has called Trump’s “toxic” effects — and who with former Gov. Arnold Schwarzenegger co-founded New Way California, an effort to moderate the party — introduced a plank in the party’s platform formally stating the GOP’s object to intolerance and racism. His move, though viewed as likely to pass in a vote Sunday, was seen by some as a clear jab at the president and was denounced by one Tea Party activist “as popular as a stink bomb in an elevator.’’

But Mayes wasn’t alone here in expressing his concerns that in becoming the “party of Trump,’’ the state GOP has all but ensured its destruction in California, a state that is home to the largest number of immigrants and a fast-growing Latino electorate.

Under Trump’s leadership, “less and less people continue to participate. The diversity of thought in conversation has also disappeared,’’ says longtime GOP strategist Luis Alvarado, who didn’t vote for Trump in 2016 — and vows to reject him again in 2020.

“No one can actually point to anything this administration has done effectively. Everything has been geared towards nationalism and partisanship,’’ he said. “There is no way anyone can agree that this president is a president for all the people.”

But Harmeet Dhillon and Shawn Steel, California’s two representatives on the Republican National Committee, say the weekend’s popular training sessions — all closed to media and packed to capacity with party activists — are evidence that the California GOP “2.0” reboot is working.

“Half of our board of directors are under 40,’’ and many of them immigrants or minorities, says Dhillon, an attorney and former state party vice chair who is herself a devout Sikh who immigrated from India. “It’s a different generation and it’s very diverse, and they’re bringing a different perspective with what they care about — digital tools and other things.”

“In some of these house races and legislative seats, many of our candidates are Asian American — and the Democrats are running old white guys,’’ he says. “It’s totally flipped.”

Park Steel is only one example of what party leaders are calling an “embarrassment of riches” in the ethnically diverse array of candidates who have lined up for the 2020 cycle even as the state party in recent years has grown older and whiter.

Among them are Young Kim, the first Korean American to serve in the state legislature and now a candidate for the congressional seat held by Democratic Rep. Gil Cisneros; Angela Underwood Jacobs, an African American city councilwoman from Lancaster and Mike Garcia, a former Navy pilot, both hoping to unseat Democratic Rep. Katie Hill in eastern Los Angeles and Ventura County.

Also a party priority, according to NRCC executive director Parker Poling, is the campaign of former Congressman David Valadao; she told GOP delegates he has a double digit lead and is on track to retake his congressional seat from Democratic Rep. T.J. Cox, who unseated him in 2018.

Dhillon says she’s convinced that Republicans have a winning message for California, the world’s fifth largest economy. “The economy is moving and there are job opportunities at every level for people of every color and gender…and what are the Democrats selling?’’ she said. “The world is going to end in 12 years. Climate change as a religion. Abortion in the ninth month. These are not mainstream positions, even on the left. It’s a turnoff.”

Patterson told activists this weekend that Republicans can reboot and win because California Democrats only offer “failed leadership” in a state on a “downward spiral.”

Democrats are “arrogant, complacent and cocky’’ about homelessness, taxation and housing affordability in the state, she said at one point, adding — in a veiled reference to Trump — “it’s no wonder that Democrat politicians want to talk about tweets and, frankly, anything other than their record of failure.’’