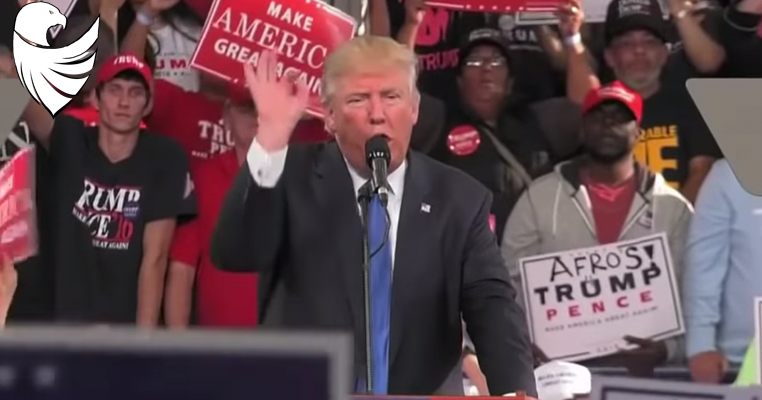 New reports indicate President Trump’s team is gearing up for a battle to win the state of Michigan in the upcoming election, working to prepare volunteers for the rigors of the 2020 campaign.

According to Michigan Republicans, 74 training sessions have already been conducted, with as many as 1,400 volunteers being trained to handle a variety of campaign tasks.

Speaking with GOP members in Michigan, press secretary Kayleigh McEany vowed that “In 2020, we’re not going to be underestimated,” as the team prepares to fight for a repeat victory in the battleground state.

During the 2016 election, the traditionally left-leaning state narrowly went for Trump, much to the surprise of pundits who believed Michigan to be in the tank for Hillary.

As Democratic presidential hopefuls descend on Detroit for their second round of televised debates, Republican President Donald Trump’s re-election campaign is training volunteers for what his national press secretary described as the most advanced ground game in modern political history.

Kayleigh McEnany visited Michigan Republican Party headquarters in Lansing on Monday for a national training session. She rallied volunteers as they prepared to learn about an advanced set of organizing and outreach tools the campaign is deploying early in a state they argue is critical to Trump’s re-election bid.

“We’re way ahead,” McEnany told The Detroit News, noting Trump signed paperwork to establish his re-election campaign on the same day as his inauguration in 2017.  “Democrats are still squabbling among 20 leftist socialists, and we’re putting together the most well-oiled machine in modern politics.”

The Republican National Committee has spent more than $300 million building its digital and data ground game operation since 2014, said Rick Gorka, director of regional communications for Trump Victory, the joint fundraising committee for the party and campaign.

So far in Michigan, Republicans say they have hosted 74 training sessions attended by more more than 1,400 volunteers, who are taught basic organizing techniques, voter registration, social media, messaging and more.

The effort borrows from former Democratic President Barack Obama’s winning campaigns that turned the traditional ground game into “more of a community organizer model” reliant on volunteers reaching out to their neighbors for the kind of personal contact that staffers cannot provide, Gorka said.

Republicans have assembled more than 3,000 data points on each voter in the country and can target likely Trump voters with digital ads encouraging them to join a training event.

Democratic National Committee officials said Monday they are not waiting on primary results to establish a ground game in Michigan that could be utilized by whoever the eventual nominee is.

The national party already has 45 “core members” in the tri-county Metro Detroit region alone who are reaching out to local voters and supplementing work by the Michigan Democratic Party, they said.

Early Democratic efforts include outreach to ensure Michigan residents know about new voter rights they will have this cycle after last year’s approval of Proposal 3, including no-reason absentee voting.

Trump upended public opinion polling in 2016 when he narrowly won Michigan by 10,704 votes, surprising pundits who had predicted a victory by Democratic Hillary Clinton.

“Now we have a challenge,” McEnany told a group of roughly 20 GOP volunteers in Lansing. “In 2020, we’re not going to be underestimated.”

Speaking with The News, McEnany predicted “more radicalism” from Democratic presidential candidates on Tuesday and Wednesday nights in Detroit, noting in the first Miami debate that “all of the candidates raised their hands in favor of taxpayer-funded health care for illegal immigrants.”

She defended the president against accusations of racism, calling “absurd” the claims that he is attempting to gin up support from white working-class voters in states like Michigan by stoking racial tensions.

Democratic presidential candidates who gathered in Detroit last week for a national NAACP conference blasted Trump for telling four congresswomen of color, including Michigan native Rep. Rashida Tlaib of Detroit, to “go back” to where they came from.

Critics amplified their outrage this weekend when Trump called a Baltimore congressional district represented by Democratic Rep. Elijah Cummings a “disgusting, rat and rodent infested mess” where no human being would want to live.

“That was the 2016 playbook — to call him every name you could under the sun,” McEnany said, dismissing the racism accusations. “It’s a false label. It’s wrong. … His policies are directly benefiting minority communities.”

Trump last visited Michigan in March, where he held a raucous rally that filled the 10,000-seat Van Andel Arena in downtown Grand Rapids and left other supporters outside watching on a big screen projector.

“He will certainly be back,” McEnany said of Trump. “There’s no doubt about that. We’re heading to Ohio next, and I think you’ll hear soon where next up is in the coming days.”

The Trump campaign is targeting states like Michigan, Pennsylvania and Wisconsin he flipped in 2016. Trump was the first Republican president to win Michigan since 1988, but Democrats reasserted their strength in 2018 by sweeping statewide elections.

“They haven’t been Republican states since the 1980s, but they are Trump states,” McEnany said. “We are in Trump country, and we believe we’ll hold down this map and expand further.”