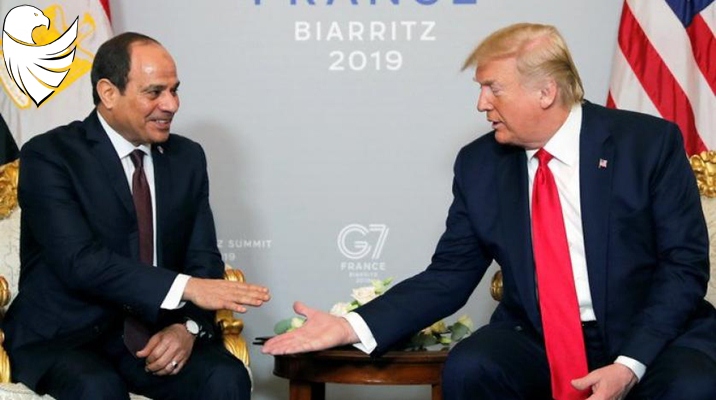 US President Donald Trump has praised his Egyptian counterpart Abdel Fattah el-Sisi, during their meeting on the sidelines of the G7 Summit in France on Monday.

Sisi was also supported by Europeans through France, UK, and German leaders who backed up Egypt’s efforts to combat terrorism and stabilize the Middle East.

“Egypt has made tremendous progress under a great leader’s leadership. It’s what it’s all about. And your staff also, who I’ve gotten to know — fantastic people. So I want to thank you and I want to congratulate you,” said Trump.

Egypt participates in the G7 summit as the head of the African Union (AU) in 2019.

“We enjoy mutual understanding, appreciation, and respect. And this is a marvelous thing that we’re having together,” stated Sisi.

Egyptian Presidential Spokesman Bassam Radi asserted the strategic ties between Egypt and the US, hailing the progress during Trump’s term.

Radi conveyed the US aspiration to additional development of bilateral cooperation ties on all levels, stressing the success achieved by Egypt in economic reforms program and comprehensive development progress.

Further, Sisi met French President Emmanuel Macron. They exchanged visions around the situation in Libya, the presidential spokesman said, noting that they have agreed on the importance of consolidating joint efforts to settle the Libyan conflict in a way that contributes to eliminating terrorism, protecting the state’s national institutions and resources, and limiting foreign intervention.