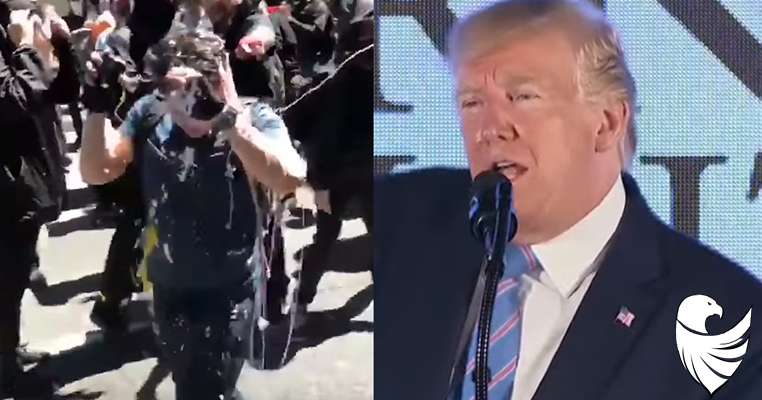 As Portland braces for a potential clash between right wing and left wing groups, President Trump has reiterated he will consider labeling Antifa a “Organization of Terror”

Major consideration is being given to naming ANTIFA an “ORGANIZATION OF TERROR.” Portland is being watched very closely. Hopefully the Mayor will be able to properly do his job!

Portland Mayor Ted Wheeler on Trump calling out Antifa: "I'm not concerning myself with tweets coming out of Washington, D.C., and frankly, it's not helpful." pic.twitter.com/wZ4GVcsLil

A serious assault took place on PB’s after they busted the door of the bus, they also threw a metal hammer at them.

I also got pepper sprayed in the face with many others. Sorry for language pic.twitter.com/UwRsY4qq6G

Riot police on the scene, protestors on the ground cheered cops to jump off and kill themselves pic.twitter.com/baXhglUIRJ

This is who’s leading Antifa pic.twitter.com/yTmg148DGi

The aggressive antifa shirtless man who was threatening people was arrested by police. This angered the mob who said this was police bias. #PortlandProtests pic.twitter.com/OYDsyLw3EY

Antifa mob follows and surrounds small group of conservatives who got separated. Police stand and try to keep a barrier. #PortlandProtests pic.twitter.com/0UGVdRWh6k

“Shoot yourselves. Suicide is the only way out!”

A rally of right-wing groups is expected to be met by left-wing counter protesters in downtown Portland on Saturday in a clash that has become familiar to Portlanders since the election of President Donald Trump.

The size and volatility of the protests remain unclear, but the weeks-long anticipation of the dueling demonstrations has garnered national attention, in part because of the history of violence during similar clashing protests in Portland.

Here’s what you should know about the potential protests:

“The End of Domestic Terrorism” rally is slated to begin at 11 a.m. at Tom McCall Waterfront Park, and is expected to draw far-right supporters from outside of Oregon. Portland police said people could begin gathering at the park as early as 9:30 a.m.

The rally was reportedly organized by Joe Biggs, a former InfoWars staffer, and Enrique Tarrio, chairman of the Proud Boys, a group of self-described “Western chauvinists” that the Southern Poverty Law Center has designated as a hate group.

Biggs told the Associated Press earlier this week that he decided to hold the rally after seeing the assault of conservative writer Andy Ngo during dueling protests between right-wing groups and left-wing anti-fascists on June 29 in Portland. The attack was captured on video by The Oregonian reporter Jim Ryan and has been viewed millions of times on social media.

First skirmish I’ve seen. Didn’t see how this started, but @MrAndyNgo got roughed up. pic.twitter.com/hDkfQchRhG

“That group of Antifa there in Portland needs to be exposed for who they are,” Biggs said in a phone interview with AP earlier this week. “And guess what? They should be scared.”

Biggs told AP he’s directed supporters to not bring weapons or start fights, but to still be prepared to defend themselves.

At least one counter-protest, organized by Rose City Antifa, is expected.