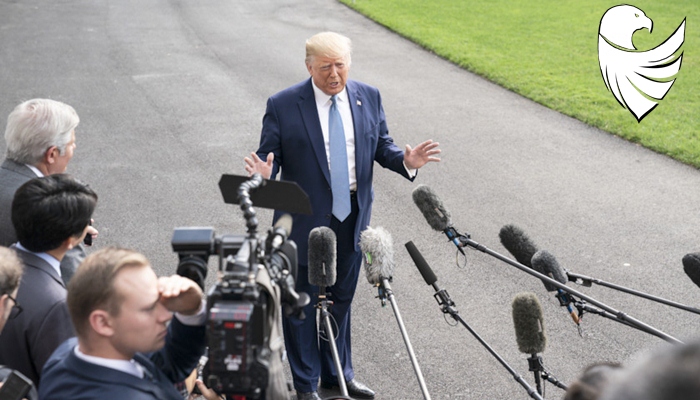 President Donald Trump took aim at CNN in a speech Thursday, suggesting starting “our own network” to counter the global reach of the media giant and it’s “fake” news.

Trump also spoke of Voice of America and Radio Free Europe in the past tense, even though the two U.S. government-funded entities broadcast to an estimated global audience of 275 million people each week.

While complaining about CNN, a frequent target of the president’s ire, Trump told an audience in central Florida, “We used to have … Radio Free Europe and Voice of America, and we did that to build-up our country, and that’s not working out too well.”

“And we ought to start our own network and put some real news out there because they [CNN] are so bad,” he added. “They are so bad for our country.”

“VOA has always been — and still is — proud of its mission to provide objective, credible news and information to countries around the world that have no other access to it, and to tell America’s story overseas,” VOA Director Amanda Bennett said in a statement Thursday.

VOA has queried White House Press Secretary Stephanie Grisham and deputies in her office for a comment regarding the president’s remarks, but there has been no immediate response.

A spokesperson for the U.S. Agency for Global Media (USAGM), which oversees VOA and RFE, as well as three other U.S. civilian broadcast networks, said, “All USAGM networks support the Agency’s mission of informing, engaging, and connecting people around the world in support of freedom and democracy. Adhering to our journalistic values of accuracy, fairness and balance is fundamental to that mission.”

The Senate Foreign Relations Committee is considering Trump’s choice to run the U.S. Agency for Global Media (USAGM), which oversees all government-funded news organizations, including VOA and Radio Free Europe.

Michael Pack, a documentary producer who headed the conservative, California-based Claremont Institute and has worked for the U.S. nonprofit Corporation for Public Broadcasting, was nominated by Trump to head USAGM 16 months ago. If he is confirmed by the full Senate, Pack would succeed John Lansing, who was appointed by former President Barack Obama in 2015.

Pack testified on Sept. 19 that as chief executive of USAGM, he would place a premium on improving operational effectiveness and employee morale, and preventing further ethical scandals from undermining the organization’s credibility.

“The whole agency rests on the belief the reporters are independent, that no political influence is telling them how to report the news and what to say,” Pack testified. “Without that trust, I think, the agency is completely undermined.”

Voice of America began broadcasting in 1942 to combat Nazi propaganda with accurate and unbiased news and information. VOA is the largest U.S. international broadcaster, providing news and information in more than 40 languages to an estimated weekly audience of more than 275 million people. Radio Free Europe was established at the beginning of the Cold War to transmit uncensored news to audiences behind the Iron Curtain.

← McDaniel “How Could Anyone Want to Impeach Trump and Reverse the Progress He’s Made?” ← Trump Woos Seniors With Order to Boost Medicare Health Program