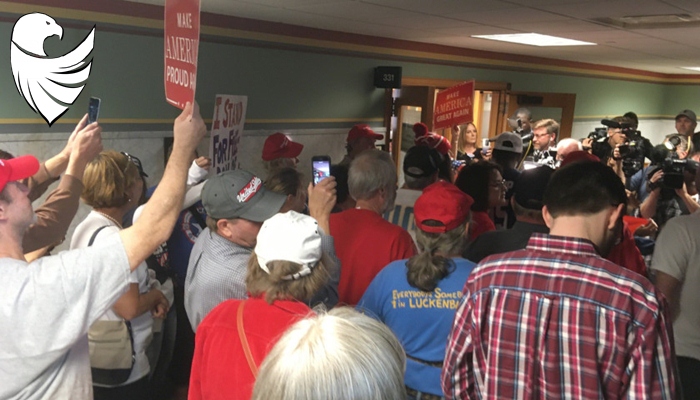 A group of Trump supporters protested outside of Minneapolis Mayor Jacob Frey’s office Wednesday after he defended a decision to pass a $530,000 bill for security fees on to the Trump campaign.

As The Minnesota Sun reported, Trump’s reelection campaign accused Mayor Frey of extortion and “abusing the power of his office.” The accusation came after Mayor Frey told the Target Center, host of Trump’s Thursday night rally, that it would need to cover the security expenses. The Target Center then tried to pass the bill on to the Trump campaign.

The campaign threatened to sue the city, but later backed off after the Target Center allowed the event to move forward without payment of the security fees—at least for now.

“The arena in Minneapolis has been fully approved. The Target Center has backed off canceling the contract, which means President Trump’s Keep America Great rally will go on as scheduled,” Trump campaign manager Brad Parscale said in a statement. “Consistent with our original agreement with the venue, the Trump campaign has not agreed to pay any additional funds.”

The arena in Minneapolis is fully approved. Looking forward to seeing you Thursday. It is going to be huge! pic.twitter.com/7fjF41gyoD

It’s unclear, however, where the $530,000 for security costs will come from. The Target Center is owned by the city of Minneapolis, but operated by AEG Worldwide.

“My position with respect to the operating costs remains unchanged: In keeping with our contract with AEG, taxpayers should be reimbursed for city-incurred costs resulting from the president’s visit,” Frey told Minnesota Public Radio. “In the days ahead, I will be meeting with city leadership and my council colleagues to decide upon the appropriate path forward.”

In any case, a number of Trump-backers weren’t pleased with Frey’s public spat with the president on Twitter this week. About 30 Trump supporters demonstrated outside of Frey’s office Wednesday afternoon.

“We support the police, Frey, don’t you?” one protester’s sign said, according to video of the demonstration.

Dozens of President Trump’s supporters gathered outside Minneapolis Mayor Jacob Frey’s office to protest the half a million dollar security bill Mayor Frey wants to charge the campaign for the President’s visit to the Target Center tomorrow. pic.twitter.com/kmfmTALEuG

“He doesn’t want Trump here. He would get rid of him if he could and this is a way to get rid of him,” one protester told The Star Tribune in regards to the security bill.

The protesters were also displeased with a new Minneapolis Police Department policy that prohibits off-duty officers from wearing their uniforms at political events or for the purpose of a political endorsement. The policy change came just a day after President Trump announced his campaign rally, as The Sun reported.

“The Mayor of Minneapolis Jacob Frey thinks Donald Trump should pay for the Democrats’ protest of his visit. The protesters should pay an entry fee for their own protest,” he wrote on Twitter. “I remember when Democrats protested peacefully and didn’t destroy cities in the process.”

The Mayor of Minneapolis @Jacob_Frey thinks @realDonaldTrump should pay for the Democrats protest of his visit.

The protestors should pay an entry fee to their own protest.

I remember when Democrats protested peacefully and didn’t destroy cities in the process!

Trump’s Thursday night rally is reportedly expected to draw thousands of protesters and supporters to the city.

← Trump Unleashed in 90-Minute Minneapolis Speech: Biden Was Only Good Because He ‘Kissed Obama’s Ass,’ Omar a ‘Disgrace’ ← The Trump Administration Wants 450 Miles of Border Wall By 2020