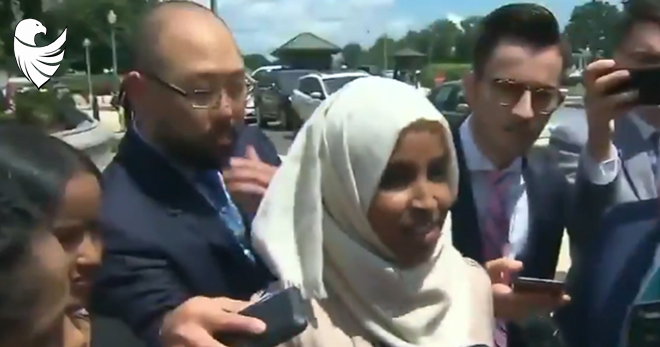 Ilhan Omar was mobbed today by reporters in capitol hill who wanted her response to her feud with President Trump as well as the chants of “send her back” at the latest MAGA rally.

Omar responded by attacking not only Trump but also his supporters.

“We have said this President is racist, we have condemned his racist remarks. I believe he is fascist. I want to remind people that this is what the President and his supporters have turned our country into that is supposed to be a country where we allow democratic debate and dissent to take place.”

Just asked Omar about the chants, and she says of Trump: “I believe he is a fascist.” Responding to Lindsey Graham, who said if she were wearing a MAGA hat Trump wouldn’t have said ‘go back:’ “Because I criticized the president, I should be deported?” pic.twitter.com/Pdgtozu6x6

Meanwhile, Omar appears to be hoping to utilize the media spotlight to promote the radical anti-Israel “BDS” movement.

Per Townhall Rep. Ilhan Omar introduced a resolution in support of the Boycott, Divest, Sanctions movement saying it was in a long tradition of U.S. boycotts. “Americans of conscience have a proud history of participating in boycotts to advocate for human rights abroad including … boycotting Nazi Germany from March 1933 to October 1941 in response to the dehumanization of the Jewish people in the lead-up to the Holocaust,” Omar said in the resolution introduced Tuesday. The 1930s boycott by the U.S. Jews of German goods came during the lead up to Holocaust starting in part with Germans boycotting Jewish businesses.

(1) Omar deceived voters on the issue of BDS during her campaign, reversing her public position after getting elected:

Back at home, many of her Jewish constituents were grappling with remarks her office made on Sunday to a website called MuslimGirl, claiming that Omar supported the boycott, divestment and sanctions movement against Israel.  This seemed like a bait-and-switch to many Jewish Minnesotans: When she was asked at an August primary debate held in a synagogue to specify “exactly where you stand” on BDS, Omar said that BDS was “not helpful in getting that two-state solution” — never explaining that she in fact supported the policy.

She said BDS was “not helpful” as a candidate, and is now a leading champion of it as an elected legislator, just a few months later.  Imagine that.  This is also a good point:

Ilhan Omar this week: Let’s sanction Israel!@IlhanMN keeps doing it, and some folks STILL can’t figure out why.

(2) Her BDS stance is not the only topic on which Omar has been deceitful.  We already know that she misspent campaign funds and violated the law by filing joint taxes with a man to whom she was not married. But her deflections and unresponsive umbrage on the subject of her marriage continues to look worse and worse.  It is increasingly plausible that in addition to campaign finance violations and apparent tax fraud, Omar could well be guilty of immigration fraud, too:

New investigative documents released by a state agency have given fresh life to lingering questions about the marital history of Rep. Ilhan Omar and whether she once married a man — possibly her own brother — to skirt immigration laws. Omar has denied the allegations in the past, dismissing them as “baseless rumors” first raised in an online Somali politics forum and championed by conservative bloggers during her 2016 campaign for the Minnesota House. But she said little then or since about Ahmed Nur Said Elmi, the former husband who swept into her life in 2009 before a 2011 separation. The questions surfaced again this month in a state probe of campaign finance violations showing that Omar filed federal taxes in 2014 and 2015 with her current husband, Ahmed Hirsi, while she was still legally married to but separated from Elmi. Although she has legally corrected the discrepancy, she has declined to say anything about how or why it happened. The new documents also detail the Omar campaign’s efforts to keep the story of her marriage to Elmi out of the press...The search of records could neither conclusively confirm nor rebut the allegation that he is Omar’s sibling. Sent a list of questions and a request to talk to her siblings and father, Omar declined to do so.