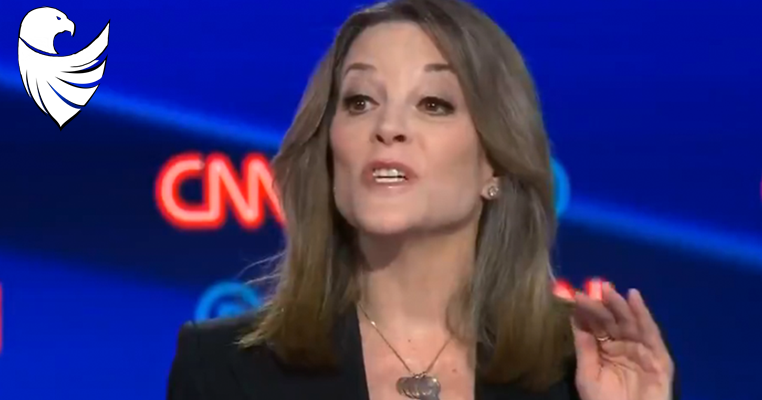 In a line that was reminiscent of “Star Wars” or “Lord of the Rings” fringe 2020 candidate Marianne Williamson delighted the crowd by discussing the “dark, psychic force” she claimed Trump had put in play in America.

Marianne Williamson gets big applause when she talks about the "dark, psychic force" at play in America https://t.co/gXm5OCVCZk #DemDebate pic.twitter.com/hDFKrFcchf

The line sparked mockery among conservatives.

Marianne: "IF YOU THINK THIS WONKINESS IS GOING TO DEAL WITH THIS DARK PSYCHIC FORCE…" pic.twitter.com/j7AdWcn5RD

There is only way to fight the Dark Psychic Force of Collectivized Hatred. We must form a fellowship. pic.twitter.com/U7j7Jyrlwf

Author and activist Marianne Williamson had several memorable moments during the second Democratic presidential debate on Tuesday night in Detroit.

During the first hours of the debate, Google searches for Williamson’s name spiked noticeably higher than those of her opponents. An hour and a half into the debate, Williamson had spoken fewer words than any of the other candidates onstage except former Colorado Governor John Hickenlooper, according to FiveThirtyEight.

Williamson who drew plenty of attention in the first Democratic presidential debate after telling the crowd she’s “going to harness love for political purposes,” had several more unusual moments at tonight’s debate.

When asked what she would do to prevent another water crisis like the one that rocked Flint, Mich., Williamson said Flint was “just the tip of the iceberg.” Williamson, who has made racial reconciliation a cornerstone of her campaign, called the environmental injustice plaguing disadvantaged communities and communities of color “the dark underbelly of American society.”

She said the problem in Flint would not have happened in Grosse Pointe, an affluent, majority-white suburb of Detroit where Williamson raised her daughter.

“If you think any of this wonkiness is going to deal with this dark psychic force of the collectivized hatred that this president is bringing up in this country, then I’m afraid that the Democrats are going to see some very dark days,” she continued.