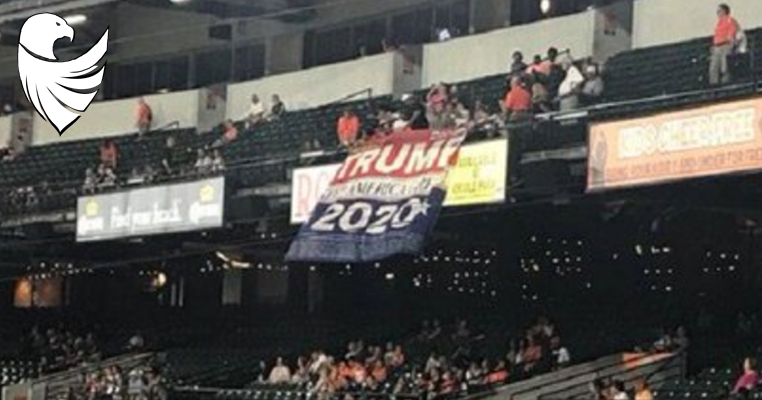 A group of Trump fans were kicked out of a Baltimore Orioles game after unfurling a Trump 2020 banner.

Some Anti-Trump audience members chanted “take it down!”

A handful of fans at Thursday’s Orioles-Blue Jays games in Baltimore made a public display of their support for President Donald Trump, unfurling a “Keep America Great, Trump 2020” banner from the second deck at Camden Yards.

The banner reportedly drew ire from the crowd, inspiring a “take it down” chant from fans in the city that has been under public attack from Trump.

A “Take it down” chant broke out at Camden Yards as this was unveiled in the eighth inning tonight. The banner has not been well-received. #Orioles pic.twitter.com/Orr7rqn8im

Four people were escorted out of the stadium by police and stadium officials, but judging by the handshakes as they left the ballpark, seems like it won’t go beyond that.

It also resulted in the removal of the four fans who unveiled the banner in the eighth inning, according to the Baltimore Sun.

The Sun reports that Baltimore police and stadium officials ordered the four fans to remove the banner before escorting them out of the stadium.

The report cites a policy prohibiting fan signage that obstructs views of other fans. That does not appear to be the rule in play in this case, as the sign covered up a paid advertisement, but didn’t appear to block any views.