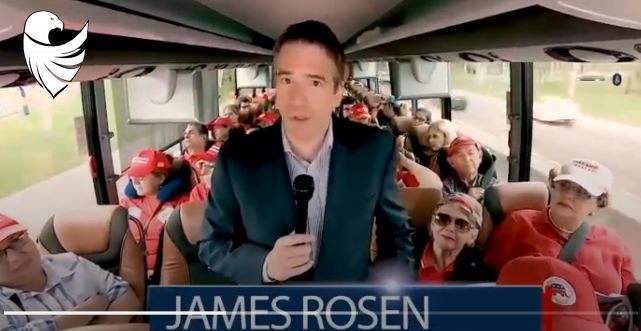 ASHINGTON (SBG) – Fewer than three out of ten Latinos voted for President Donald Trump in 2016, about the same level of support from that growing electoral bloc that Senator Mitt Romney received.
A closer look at Latino voters and border issues ahead of the 2020 race
Video: Sinclair Broadcast Group

Today, various polls show the president’s popularity among Latinos rising, a factor that could tip the 2020 election in his favor.

About one hundred red-shirted and red-hatted Trump supporters boarded charter buses in Hialeah, the Miami suburb that is 96% Latino, to embark on a three-hour road trip to support President Trump.

A native of Nicaragua, Adalila Schneider regards President Trump as a truth-teller who has improved the economy.

The mood on the buses is festive, as a trump campaign aide leads the faithful in chants.

For the travelers on this bus, cruising up the Florida Turnpike to attend the president’s kickoff rally in Orlando, politics has always been about journeys, often flight from Spanish-speaking countries where they found freedoms in short supply.

“I’m Cuban, and I feel that he is the president that we need to stomp out the socialism and communism undercurrents that we have going on in this country right now,” said Attorney Isabel Nogues.

I asked Julio Martinez, organizer of the Caravan if he has Latino friends who ask how he can support a president who hates Latinos.

“Of course, but I tell them, I say, “Look, he doesn’t hate Latinos; he hates people that break the law,” said Martinez. “If you want to come here, do it the way we did it. My father brought me here – it took us a year-and-a-half for us to come from Cuba in 1954.”

An estimated 32 million Latinos will be eligible to vote next year – making them, for the first time, the electorate’s largest minority.

Campaign aides say internal data show the president improving on the 28-percent of Latino support he garnered in 2016. Public polls suggest that may be true. If it is, it will complicate significantly the task of the Democratic nominee who runs against him.

← Trump: Without Melanie I would not be the man I am today! ← Donald Trump : America should not be a world police force.