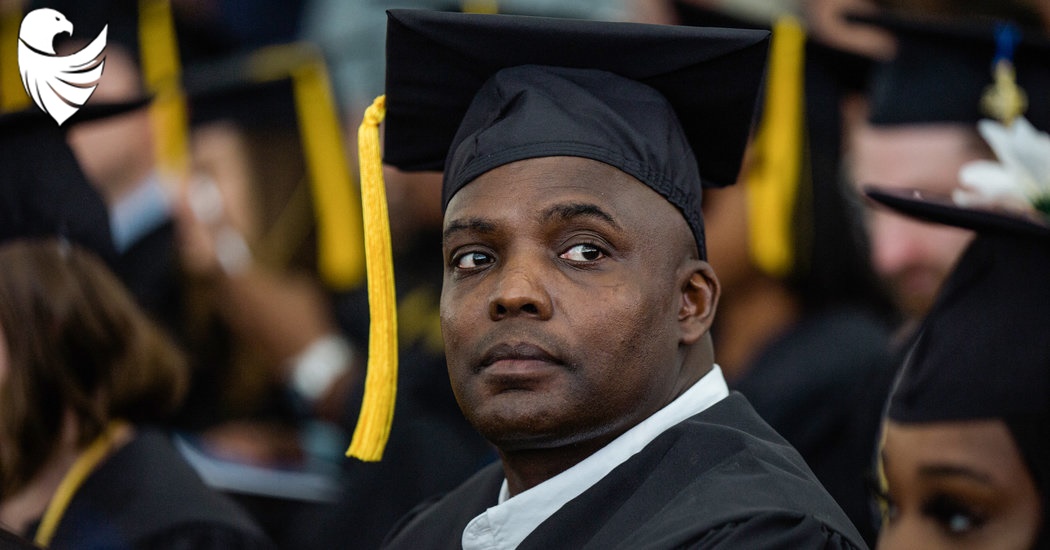 BALTIMORE — Maurice Smith stood anxious and alone, as the crowd of graduates around him hugged and chatted a few feet away. He was cloaked in the same black gown and donned the same black cap, but that was about all that he and the rest of Goucher College’s Class of 2019 had in common.

When they were 19, they were starting college. When he was 19, he was starting a prison sentence for murder that would last 27 years, one month and seven days — longer than his fellow graduates had been alive.

“There are many roads to this moment,” said Mr. Smith, 47, as he held up the cellphone he had recently learned to use and snapped a picture of himself against a backdrop of squares and tassels. “They took theirs. I took mine. But we’re all here.”

Mr. Smith’s journey from inmate to college graduate has been cheered on by a bipartisan and ideologically diverse coalition that has pressed the case for criminal justice. The path he took was quietly extended in the last year to thousands of other prisoners across the country. Mr. Smith was able to complete his bachelor’s degree through the Goucher Prison Education Partnership while serving at the Maryland Correctional Institution in Jessup, using federal Pell grants offered through a pilot program called Second Chance Pell

A spotlight on the people reshaping our politics. A conversation with voters across the country. And a guiding hand through the endless news cycle, telling you what you really need to know.Started in 2016, the program doled out $35.6 million to educate 8,800 incarcerated students at 40 institutions in its first two years, and is one of the only Obama-era education initiatives that has survived the Trump administration.

The White House has embraced the program as part of its criminal justice agenda, which aims to stymie mass incarceration and reduce recidivism. The Trump administration has pledged $28 million to extend the Second Chance Pell program through next year. Last month, in a commencement address to 70 incarcerated students at the Dick Conner Correctional Center in Oklahoma, Education Secretary Betsy DeVos announced that she was pushing for the initiative to be made permanent.

“President Donald Trump and I have faith in the power of redemption,” Ms. DeVos said.

The administration was brought to its embrace by a remarkable coalition of policy advocates — including far-right conservatives, religious groups and social justice advocates — that rarely find common cause. The libertarian billionaires Charles G. and David H. Koch, the liberal Center for American Progress, the American Civil Liberties Union, Americans for Tax Reform and the Tea Party-oriented FreedomWorks have been working toward a broad overhaul of the criminal justice system for years. 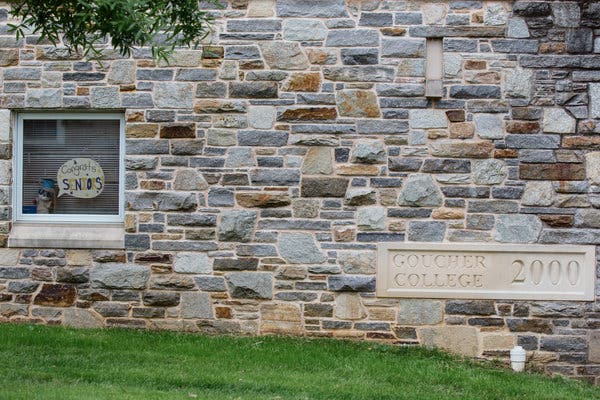 With the recent passage of the First Step Act, a bipartisan sentencing bill that will lead to the release of thousands of low-level offenders, advocates see increasing prisoners’ access to higher education as the next logical step.

Under a ban tucked into the 1994 crime bill, prisoners were ineligible for Pell grants, the largest postsecondary federal aid program for low-income undergraduates, but the Second Chance initiative partly lifted that. The 1994 bill, signed by President Bill Clinton and championed by heavyweight Democrats like Joseph R. Biden Jr., a senator at the time, is roiling politics anew. It has thrown Mr. Biden on the defensive as he seeks the Democratic presidential nomination and given Mr. Trump an unlikely appeal to black voters.

But it was a Republican, Kay Bailey Hutchison, then a senator of Texas, who proposed broadening an existing restriction on Pell grants for prisoners serving life sentences or on death row to all prisoners, no matter their offenses. After the law was signed, a robust prison education system collapsed almost overnight.

Lawmakers are seeking ways to restore Pell eligibility for prisoners, including reversing the ban in a reauthorization of the Higher Education Act.

“This issue is ripe in American politics for two reasons,” said Gerard Robinson, the executive director of the Center for Advancing Opportunity, who has studied prison education. “The millennials see this as a civil rights issue for their generation,” he said, and older generations see it as recompense for “the role they played in the war on drugs dating back to the 1970s up through the crime bill.”

The Obama administration used its experimental authority to introduce Second Chance Pell in 2015 as a pilot that unlocked Pell grants for Mr. Smith and 12,000 other eligible inmates, allowing them to pursue college coursework. The Goucher Prison Education Partnership, which had operated since 2012 with private donations, was among 67 colleges chosen to participate. The program is still 75 percent privately funded.

“Earning a bachelor’s degree while incarcerated can be life-changing,” said Amy Roza, director of the Goucher prison partnership. “There is something remarkable about having an issue, in 2019, where people in the current White House, Congress, advocates with a variety of perspectives all believe in the value of this.” 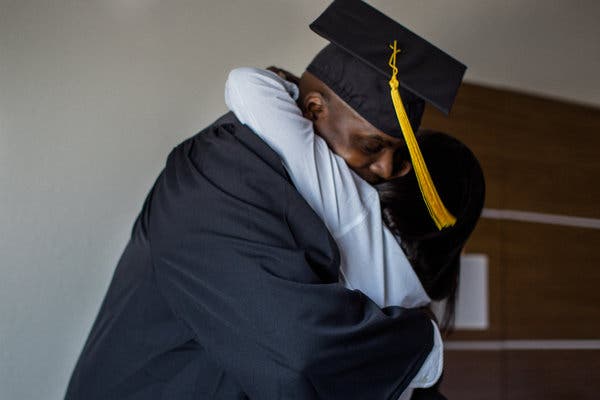 Not everyone in Congress is on board.

“I’m not really sure where this push for Pell is coming from,” Representative Virginia Foxx of North Carolina, the ranking Republican on the House Education Committee, grumbled at a recent hearing.

Where it is coming from is self-evident to a spectrum of advocates and politicians. About 90 percent of the country’s two million prisoners will be released back into society. A report published in January by the Vera Institute of Justice found that expanding Pell grants to prisoners would result in higher earnings when they are released, and save states $365.8 million each year in incarceration costs.

An often-cited 2013 RAND Corporation study, commissioned by the Justice Department, found that prisoners who had access to education were 43 percent less likely to return to prison within three years than those who did not.

In fact, they might show an appreciation of the world of work that few others would find.

“I sit in rush hour traffic and say, Wow, I’m a part of this,” said Donte Small, the Goucher program’s first graduate to earn a bachelor’s degree from the college and who is working at a software development company. “I’m just loving the grind — everybody in their cars, everybody’s going home. You realize you’re a part of a community.”

When Maurice Smith was released from prison in March, he said completing his prison term and his degree were his first major feats.

He grew up in Harlem at the height of the crack cocaine era, and quickly racked up a juvenile record for drug possession. He was generally “unmotivated” in his education, he said, but surprised himself in high school by scoring second-highest on a state standardized test. His vice principal accused him of cheating off his girlfriend. “That didn’t help my attitude,” he said.

He earned a high school equivalency diploma at 18 while serving a six-month stint on Rikers Island.

A year later, in 1992, Mr. Smith shot and killed a man who was trying to rob a friend’s home in East Baltimore. At 19, he was sentenced to life with the possibility of parole. 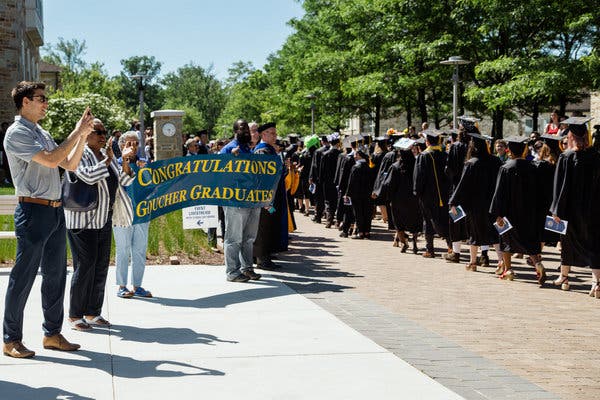 In 1993, he enrolled in college courses and made the dean’s list. The next year, the crime bill rescinded his Pell grant. He spent years after that bored and angry, in and out of solitary confinement. But then he began to knock years off his sentence through work and good conduct credits. Parole became plausible. “I could actually see that door, and I knew I had to make myself employable,” he said.

Mr. Smith began pursuing an American Studies degree at Goucher in 2013, taking courses like sociology and precalculus from 2 p.m. to 9 p.m. He would choose between sleep and studying before heading to the prison kitchen from midnight to 6 a.m.

One of his favorite pastimes was to read aloud “Of Mice and Men” with a classmate. He wrestled with Immanuel Kant’s theories on ethics versus John Stuart Mill’s utilitarianism. He thought hard on a lesson on hegemonic masculinity.

Nina Kasniunas, a political scientist at Goucher, said Mr. Smith was the “typical ‘A’ student” — cerebral and deliberate, quiet but engaging. For her congressional politics course, she said, he was asked to propose legislation on reparations for the descendants of slaves. While others put forth big and fanciful ideas, Mr. Smith’s proposal was politically palatable and constitutionally sound: reparations through educational support.

Ms. Kasniunas said students like Mr. Smith made the pat downs, metal detectors, lack of technology and other constraints of teaching in the prison worth it.

“They reminded me of the power of what we do,” she said. “Nothing is taken for granted.”

Mr. Smith graduated with a 3.79 grade point average, left prison in April and currently works the graveyard shift at a warehouse at a Johnson & Johnson. A childhood friend, Kima Smith, reconnected with him in 2015, and they married in the Maryland prison in 2017. 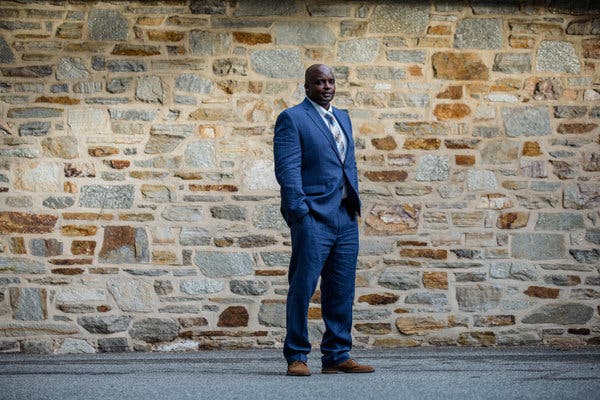 “He’s the same person now that he’s always been,” she said. “When he sets his mind to something, he does it.”

In the 24 hours before graduation, exactly two months after his release, Mr. Smith walked through Goucher’s lush green campus and stone buildings for the first time. Until that day, his Goucher College had been a library with orange plastic circular tables and a few computers lining the walls.

“You know you’re representing something bigger, but I never imagined this,” he said, as he walked to pick up his cap and gown.

Mr. Smith said he went from an underachiever to wanting to pursue a master’s degree in sociology, vowing to press for education in the criminal justice system.

“My education could never be accurately valued by the pay I receive at my job,” he said. “There is infinitely more value in the way in which I now view the world.”

Mr. King, who delivered the keynote address, told the story of a correctional officer who had pulled Mr. Smith aside, leaving him wondering what he had done wrong. The officer then handed him a five-page college paper to proofread.

The next day at Goucher’s grand commencement, students laughed at one-liners from the speaker, Bill Nye the Science Guy, and inside jokes about a campus fox. Mr. Smith, stoic, processed the pomp and circumstance the way he had been conditioned as Inmate No. 227-777 — taking much in, emitting little.