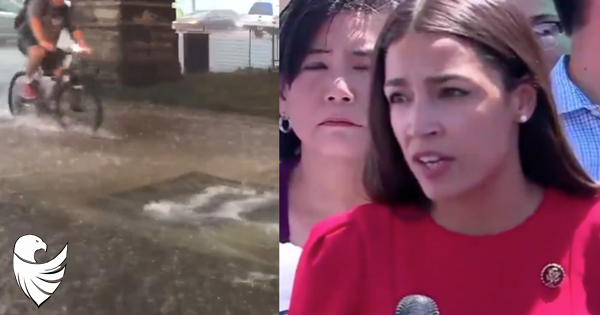 Recently, Democrat Rep. Alexandria Ocasio-Cortez, or “AOC” as she’s known to her fans online, took to social media to decry what she said was “Unprecedented flooding,” which she believes “is quickly becoming the new normal.”

Interestingly, the popular but controversial Congresswoman seemingly implied Republicans are to blame for it by supporting the fossil fuel industry.

“The GOP will mock [and] sow confusion until it’s their home swept away,” Ocasio-Cortez said in a follow up comment.

It’s more than 1 day or 1 storm; it’s all of them. Places are flooding where they haven’t before; there are 90-degree days in Alaska in June. The GOP will mock & sow confusion until it’s their home swept away.

6,388 people are talking about this

Needless to say, conservatives did not appreciate being blamed for flooding, and took to social media to let Ocasio-Cortez know how they felt.

For Democrats heading into the 2020 election and beyond, the issue of climate change may  remain a top priority, but comments indicate that voters do not appear to share the same concerns.

AOC: OMG Republicans are ruining the planet. Water is literally falling from the SKY!!!

109 people are talking about this

24 people are talking about this

I trust you to save us from impending prosperity

The “New Norm” appears to be democrat climate change hysteria.

19 people are talking about this

Curbs are quickly disappearing under a flood of water in ⁦@washingtondc⁩ / this is Constitution Ave. ⁦@fox5weather⁩ @fox5dc ⁦@caitlinrothfox5⁩ #traffic pic.twitter.com/AbnKklNDEu

← Trump looks out the window. Everyone should read this ← A ‘Second Chance’ After 27 Years in Prison: How Criminal Justice Helped an Ex-Inmate Graduate