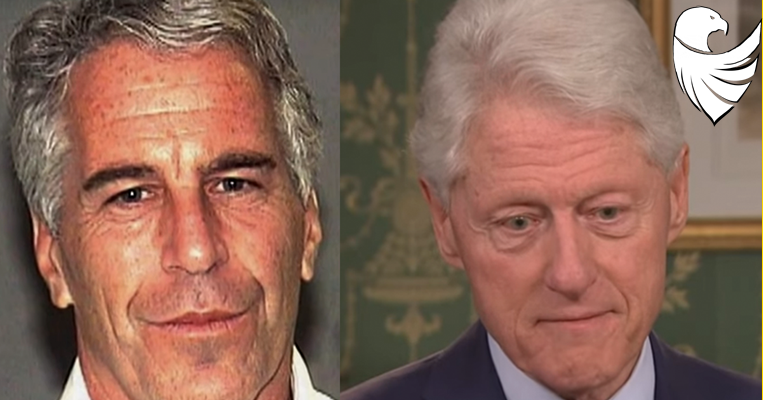 During a press gaggle in NJ, President Trump asked if ex-President Bill Clinton had been to Jeffrey Epstein’s “pedophile island.”

Per DailyCaller, President Donald Trump on Tuesday asked if former President Bill Clinton ever visited Jeffrey Epstein’s private island, which was rumored to have been used for secret sexual relations between powerful people and underage girls.

The president was asked during a press gaggle in Morristown, New Jersey about the conspiracy theory alleging that the Clinton family was involved in Epstein’s alleged suicide while in jail. The theory claims that the Clintons facilitated Epstein’s death in order to prevent him from sharing incriminating information with investigators after he was charged with running an underage sex trafficking ring.

President Trump once predicted Bill Clinton’s relationship with Jeffrey Epstein would get him in trouble.

Her testimony contradicts Clinton’s statement earlier this week that he has never been to the island, known as Little Saint James, between St. Thomas and St. John in the U.S. Virgin Islands.

Epstein was forced to register as a sex offender in 2008 after receiving a lenient plea deal for allegedly paying girls for sexual massages. On Monday, a new indictment was unsealed charging him with molesting underage girls and sex trafficking.

Epstein accuser Virginia Roberts Giuffre, who was known as Virginia Roberts at the time, said in a 2014 lawsuit that while she saw Clinton on the island, she did not see him engage in sex, the New York Times reported in 2015. Her claim has not been corroborated.

“Almost every time that Clinton’s name is on the pilot logs there are underage girls, there are initials, and there are names of many many girls on that private plane,” said investigative reporter Conchita Sarnoff, the executive director of Alliance to Rescue Victims of Trafficking and the author of “Trafficking,” in a Fox News interview Monday night.

Fox News reported in 2016 that Epstein allegedly offered sex to underage girls aboard the jet, dubbed by tabloids the “Lolita Express.” An air hostess testified the plane had a bed where passengers had group sex.

The Smoking Gun reported in 2015 regarding the lawsuit that Epstein had 21 different numbers for Bill Clinton in his phonebook. The report said several of Epstein’s victims “floated the possibility of subpoenaing Clinton.”

← OUCH! Houston Paper Calls for Beto to Drop Out of the 2020 Race ← CNN’s Chris Cuomo Issues an Apology for “Fredo” Encounter