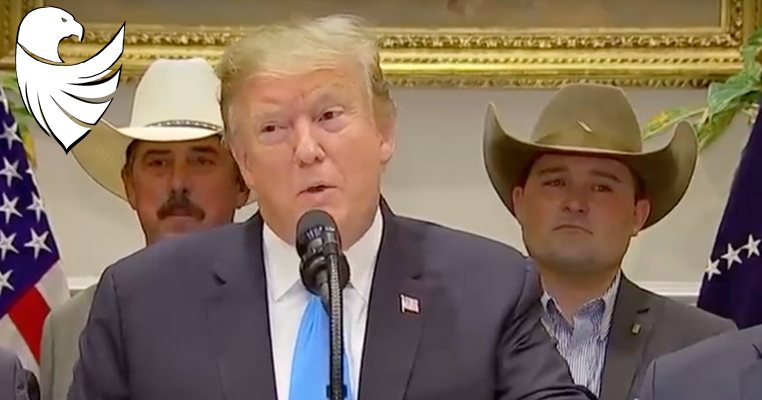 On Friday, President Trump revealed new details regarding a US-EU trade deal, which if completed, would pose a major victory for his re-election campaign heading into 2020.

The deal is set to provide relief for US farmers, who Trump said “are indeed patriots,” speaking recently, noting that he and his administration are working to achieve a more friendly and fair trade environment for farmers.

The move comes as Trump’s trade war with China continues, leading to sanctions and threats from both sides as the ongoing dispute drags on.

President Trump on Friday announced a deal with the European Union to increase market access for U.S. ranchers.

The agreement, which must still receive approval from the European Parliament, marks a potential victory on the trade front for Trump as he escalates a fight with China and threatens additional tariffs against France.

“These are indeed patriots,” Trump said in the Roosevelt Room of the White House, surrounded by farmers in rancher hats. “They’re always targeted first by other countries that try and take advantage of the United states. They’re the first to be targeted, but we take that target off their back.”

The agreement establishes a duty-free tariff rate quota for the U.S. in European markets. U.S. Trade Representative Robert Lighthizer said the agreement will nearly triple the market access for American ranchers once it is fully implemented.

Should the EU approve the agreement, it would provide a win for Trump and farmers as the latter bears the brunt of the president’s trade war with China.

Trump on Thursday threatened to impose new tariffs on virtually all remaining Chinese imports starting next month as he expressed unhappiness with the pace of negotiations between the two sides.

China on Friday pledged it would retaliate to protect its interests if the U.S. followed through on the additional duties.

The Trump administration has provided billions of dollars in aid to farmers adversely impacted by the ongoing trade dispute with China.

The president has separately imposed steel and aluminum tariffs on the EU and called the continental bloc a “foe” over its trading practices.

After watching EU and U.S. officials sign the beef deal, Trump joked that he had decided to impose new tariffs on the European bloc.

“We’re working on a deal with the European Union will agree to pay a 25 percent tariff on all Mercedes Benzs, BMWs coming into our nation, so we appreciate that,” Trump said, quickly adding, “I’m only kidding.”