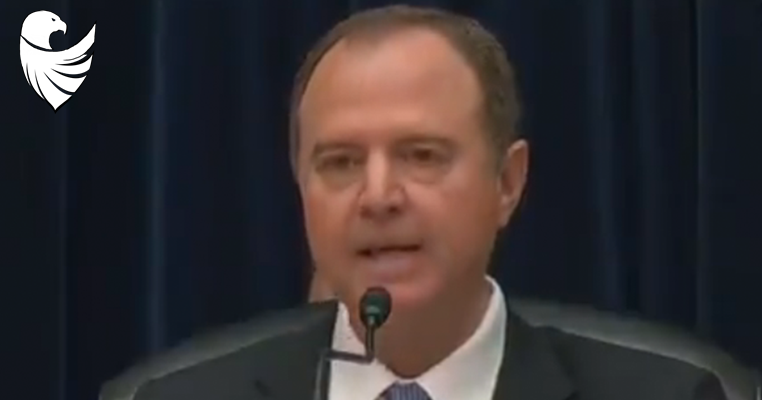 House Intel Committee chairman Adam Schiff is taking heat from Conservatives for “performing” a completely inaccurate “script” of what President Trump said in his call to Ukraine President Volodymyr Zelensky.

Schiff claimed “This is the essence” but went on to add his own “color” to portray President Trump as a “mafia boss” like character.

This video of Adam Schiff explaining Trump’s Ukraine call was so dishonest and twisted that I thought it was a deep fake.

Pencil neck Adam Schiff is a liar and obstructing transparency and justice! pic.twitter.com/YiXgpFRopS

In opening statement, Rep. Schiff makes up dialogue to represent what Trump said to Zelensky. A rough transcript of the president’s words exists, and is available, but Schiff’s version is more dramatic.

In opening statement, Rep. Schiff makes up dialogue to represent what Trump said to Zelensky. A rough transcript of the president's words exists, and is available, but Schiff's version is more dramatic. pic.twitter.com/f7gS4KIPge

He spent a lot of high-profile time asking Maguire to repeat things he had already said or couldn't answer that didn't move the ball for the Dems.

Biggest takeaway will likely be his fake Trump call.

The transcript of the call reads like a classic mob shakedown:

Nice country you got there.

It would be a shame if something happened to her.

Shifty Schiff- There you go ad-libbing again because that is not what the transcript said. Biden needs to be investigated for his crimes and corruption- this shell game you Dems are playing isn’t going to fool anyone, especially not AG Barr. Pack your overnight bag for jail…

“This is the essence of what the president communicates. We’ve been very good to your country, very good, no other country has done as much as we have, but you know what, I don’t see much reciprocity here. I hear what you want. I have a favor I want from you, though. And I’m going to say this only seven times, so you better listen good.”

The congressman on Wednesday compared Trump’s words to Volodymyr Zelensky as akin to a “Mafia-like shakedown” and he apparently read that perception into his interpretation of the transcript of that conversation.

The House Intelligence Committee chairman even suggested that Trump told Zelensky, “‘And I’m going to put you in touch with Rudy — you’re going to love him, trust me. You know what I’m asking, and so I’m only going to say this a few more times in a few more ways. And by the way, don’t call me again, I’ll call you when you’ve done what you’ve asked.’ This is the sum and character what the president was trying to communicate with the president of Ukraine. It would be funny if it wasn’t such a graphic betrayal of the president’s Oath of Office.”