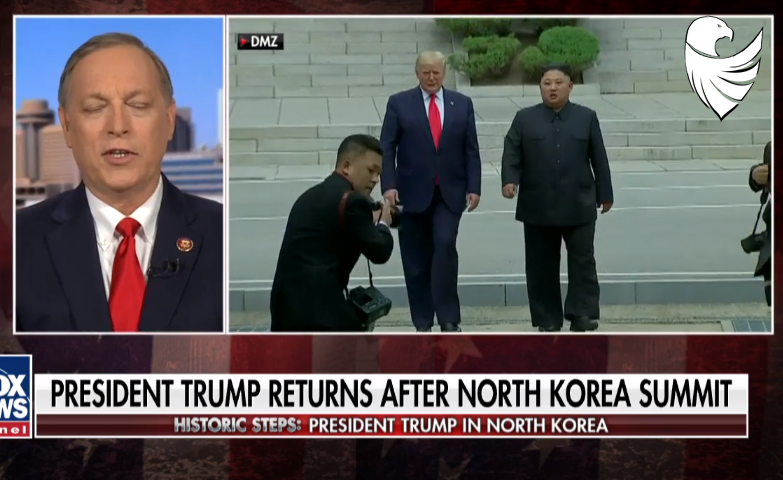 Trump knew he was on the right track and doubled down by meeting Sunday with Kim at the Demilitarized Zone dividing North and South Korea. The U.S. president understands that while his North Korea policy has not reached its ultimate goal of complete denuclearization of the North, it has made important progress.

North Korea has not tested a nuclear device since September 2017. And aside from a few short-range missiles that the North tested in anger over the breakdown of the Vietnam summit, there have been no North Korean missile launches since November 2017.

Just as important, President Trump’s diplomacy with North Korea has significantly eased tensions on the Korean Peninsula and reduced the chances of an accidental war. This is readily apparent by the vastly different DMZ visits by Presidents Barack Obama and Trump.

Trump met Kim at the DMZ and openly walked into North Korean territory, becoming the first sitting American president to set foot in that country. By contrast, when President Obama visited the DMZ in 2012, he looked into North Korea with binoculars and through bulletproof glass.

Trump also believes the Vietnam summit was a partial success, since it allowed him to make clear to Kim the main requirement for an acceptable agreement: complete denuclearization of the North.

Unlike Trump’s critics who predicted that North Korea would never resume talks with the U.S. after the breakdown of the Vietnam summit, the president always believed the talks would resume. This is why he ignored North Korea’s hostile rhetoric and short-range missile launches after the summit in Vietnam.

Instead, Trump voiced his optimism that his personal relationship with Kim would eventually lead to an agreement. Trump let Kim blow off steam until the North Korean leader was ready to resume negotiations.

Trump gambled that he could bring about a resumption of negotiations by offering to meet with Kim at the DMZ after the G20 summit in Japan. Trump didn’t know if Kim would show up, but was willing to take the risk of seeing his offer rejected.

Trump’s gamble paid off. What was supposed to be a brief handshake and photo op at the border turned into a nearly hour-long meeting during which the two leaders agreed to restart negotiations in the next few weeks.

President Trump said “speed is not an object” to reach an agreement. He also invited Kim to visit him at the White House.

U.S. negotiators now have a tough road ahead of them. Their North Korean counterparts are likely to resist meeting the tough terms President Trump has set for a denuclearization agreement and will push for a much weaker agreement, as well as making demands the U.S. cannot accept.

The talks could easily stall or fail again. Trump’s negotiators also know that given North Korea’s long record of violating prior agreements, a new agreement will have to be ironclad. with extremely strong verification provisions.

Perhaps Kim will never choose to walk through that door. But perhaps the confidence-building that President Trump has initiated with his personal diplomacy will convince Kim to make a denuclearization deal that formally ends hostilities and allows North Korea to join the community of nations.

Only a dealmaker president could have brought our nation to the brink of such a momentous possibility for peace with North Korea. All Americans should hope President Trump succeeds, because his success in this important endeavor would enhance U.S. national security.