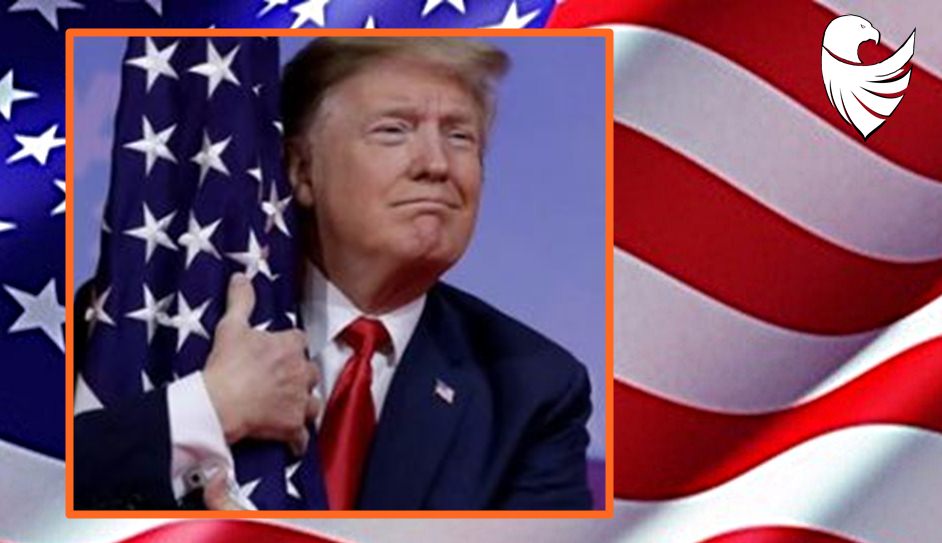 FLAG IS RESPECTED..
Today, on its 242nd birthday, America’s flag is hanging higher than ever before. So, it should be no surprise that it is also on this day that we celebrate the birthday of President Donald J. Trump.
The reality is that no elected leader has fought harder to restore the respect in America’s flag than President Trump — both at home and abroad.

We’ve watched as celebrities and reporters cackle at President Trump physically hugging the flag. Their scorn for our President blinds them from appreciating this lighthearted gesture that the crowd adores.
The president’s literal embrace of the Star Spangled Banner stems from his deep reverence for all the things it represents, a reverence that is expressed in almost everything he does.
You can see that on display as he responds to those who disrespect the flag. The increasingly tolerated celebration of disrespect for American symbols and recasting of the founding generation that endowed us with the flag cuts against the core of President Trump’s value system.

We’ve seen millionaire athletes refusing to stand for the flag during the national anthem and illegal immigrants carrying the flags of their dysfunctional home countries while coming here in search of a better life. Americans are right to be outraged and President Trump has bravely stood against these pathetic attacks on the unique promise our flag offers.

That’s because for proud Americans like President Trump, the flag is more than a logo and more than an object. It stands for the law enforcement officials who protect our freedoms at home, even as some use those freedoms to insult police officers, call them racist oppressors, or burn the flag. It stands for the veterans who have given everything in defense of our freedoms abroad, veterans who are finally getting the new services and support they deserve thanks to President Trump’s efforts.

It’s the banner that drapes the coffins of our heroes fallen overseas, who are finally able to return home after decades in unmarked North Korean graves. It was the patch on the arms of brave Americans who, 75 years ago, stormed the beaches of Normandy and kept the possibility of freedom and self-government alive.
“More powerful than the strength of American arms was the strength of American hearts,” President Trump said of our brave heroes who fought at Normandy on the 75th anniversary of that historic battle. “These men ran through the fires of hell moved by a force no weapon could destroy: the fierce patriotism of a free, proud, and sovereign people,” he continued. “They pressed on for love in home and country — the Main Streets, the schoolyards, the churches and neighbors, the families and communities that gave us men such as these.”
President Trump recognizes that the flag is an eternal symbol of that fierce patriotism, that love, and those families and communities.

It’s not because he was born on Flag Day that President Trump placed such importance on negotiating with the North Korean dictator to secure the return of those remains or delivered an historic address in Normandy. But instead, it’s his understanding of everything that our flag represents that has undoubtedly inspired his unwavering defense of the values it represents.

The American flag, adopted officially on this day in 1777, is a symbol that has never been far from President Trump’s heart. Since his birth, 169 years later, it has waved above him, representing the ideals, freedoms, and traditions of the great nation that he now leads.
Thanks to President Trump, America’s flag is respected again, meaning America is respected again. It’s no meaningless coincidence that the man who shares his birthday with our nation’s flag has become its greatest champion. It was fate.

Happy birthday, Mr. President and a big happy 242nd Birthday to the Stars and Stripes too!
Kimberly Guilfoyle (@KimGuilfoyle) is a senior adviser to Donald J. Trump for President, Inc.
Source: dailycaller.com