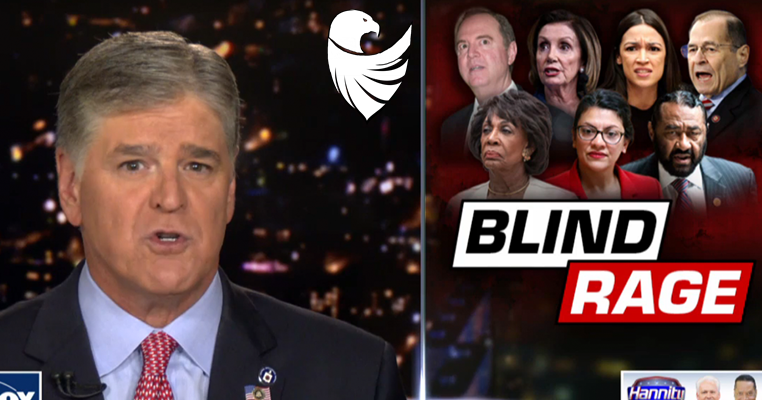 Sean Hannity predicted a big reelection win for President Trump in 2020 on his Monday night show.

He said he believes Trump supporters will be able to thank Democrats for their “stupidity” in helping Trump’s re-election efforts.

Sean also explained how he believes the radical Democrats are a “clear and present danger” to our constitutional republic.

#HANNITY: Sean explains how the radical Democrats are a “clear and present danger” to our constitutional republic. Watch! pic.twitter.com/78vKFj6Y3i

Per FoxNews, Sean Hannity predicted President Trump‘s reelection Monday night, saying the president’s supporters will be able to thank Democrats for their “stupidity” that will help lead to his reelection.

He said Democrats may impeach Trump, who is ensnared in a “quid pro quo” controversy with Ukraine, but Hannity said he is confident that “it’s going to end up with the re-election of Donald Trump.”

Hannity also predicted that Republicans could take back the House and gain on their majority in the Senate. He pointed to what he sees as the media’s relentless coverage on the Trump-Ukraine controversy.

The host also noted that if Democrats do win, their proposals could impact America and “destroy” the economy.

“But make no mistake about it these are dangerous times for our Constitutional Republic,” Hannity said. “By the way, God help us if they ever did win with their $94 trillion Green New Deal. There are $36 trillion Medicare-for-all with no private insurance.  You see that would destroy the greatest economy ever designed by man.”