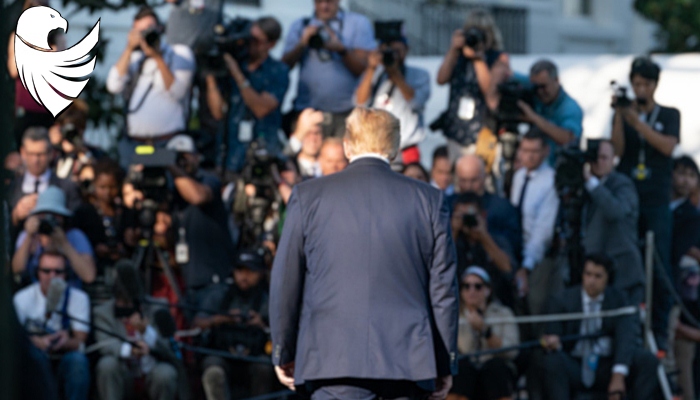 President Trump has had far more contact with reporters than any other president, according to an award-winning presidential historian. Scholar Martha Joynt Kumar, who specializes in White House communications and presidential transitions, said that as of the end of June, Trump had had 442 exchanges with media reporters.

Kumar, the director of the White House Transition Project at Towson University, said Trump is “far ahead of the others” during  a recent panel discussion on President Trump and the media.

The historian said that during their first 30 months in office, Bill Clinton had 434 exchanges with the media, George W. Bush had 266, George H.W. Bush had 217, Ronald Reagan had 119 and Barack Obama had only 78, according to the historian.

Counting up all of a President’s public utterances – speeches, weekly radio/ television addresses, press conferences, interviews, exchanges with reporters – at least one third of the occasions where he speaks are ones where he answers questions from one or more
journalists. Presidents Obama [29%], George W. Bush [30%], George H. W. Bush [33%], and Ronald Reagan [28%] were remarkably similar in the percentage of the total occasions where they took questions. With 40%, President Clinton was more inclined than the other presidents to answer questions. President Trump has significantly higher numbers taking reporters’ queries than the other five presidents. One of the reasons President Trump’s percentage numbers are as high as they are is because he gave comparatively fewer speeches.

She explained there are three ways that presidents interact with the press, through press conferences, short Q&As, and interviews.

Trump’s frequent Q&As have taken on increased importance since formal White House press briefing have not been held in more than five months.

“The traditional on-camera briefings, which were held regularly under press secretary Sean Spicer, became shorter and less frequent under Sarah Huckabee Sanders, and have been nonexistent under Stephanie Grisham, who took the reins in June,” Politico reported.

According to Kumar, Trump’s short question and answer sessions can have as few as only one question, but can also last up to 20 minutes.  She noted that the sessions can be somewhat chaotic, especially when conducted outside of the Marine One helicopter.

“It’s a setting, where in a sense, he’s the ringmaster. He decides who he’s going to call on,” she noted.

In contrast, Kumar said, former president Barack Obama had only 78 exchanges with the media during his his first 30 months.

“It shows the difference in the way they work. In Obama’s case, he liked to do long interviews because he liked to discuss policy and he liked to go into depth.