Hurricane Dorian hasn’t yet made landfall in Puerto Rico, but President Donald Trump is already picking at old wounds, reviving attacks on the island territory and its leaders as the storm bears down.

The president has been battering Puerto Rico all week, raining down falsehoods from his Twitter feed and reviving old feuds while authorizing his administration to mobilize as officials attempt to prevent a repeat of its much-criticized response to back-to-back storms that ravaged the island territory two years ago.

The National Hurricane Center on Wednesday upgraded Dorian from a tropical storm to a hurricane as it crossed through the U.S. Virgin Islands with wind gusts of up to 90 mph. The storm is expected to intensify, potentially growing into a Category 3 storm by the time it approaches the Florida coast this weekend.

“Will it ever end?” Trump mused on Twitter earlier this week, when forecasts showing Puerto Rico in Dorian’s path began to solidify. Wednesday, hours before the storm made landfall, Trump again appeared frustrated that the Caribbean island territory was in the bull’s-eye of yet another natural disaster.

“We are tracking closely tropical storm Dorian as it heads, as usual, to Puerto Rico,” he said in a tweet, pledging that “FEMA and all others are ready, and will do a great job.”

“When they do,” he continued, “let them know it, and give them a big Thank You — Not like last time. That includes from the incompetent Mayor of San Juan!”

The latest volleys are part of a long-standing war of words between Trump and Puerto Rico’s leadership. Trump has relentlessly dinged the island’s top officials over allegations of corruption amid a financial crisis that existed well before the 2017 storms.

Trump also continued to dismiss the island’s nearly 3 million residents — all U.S. citizens — as being insufficiently grateful for federal aid, and continued to conflate a long-term estimated price tag for the recovery from the 2017 hurricanes with the amount of money Congress has actually appropriated.

Though the capital of San Juan is not expected to bear the brunt of the storm, Mayor Carmen Yulín Cruz has said in the lead up that her municipality is prepared, and that she is “cautiously optimistic” in the federal government’s ability to do its job there.

Still, she said in an interview Wednesday on MSNBC, “we honestly have no time for the tweeting, incompetence of the president of the United States who … continues to get underway with his divisive and aggressive comments toward the people of Puerto Rico.”

Trump’s comments only “stand in the way” of relief efforts, she said, suggesting the president butt out “if you can’t say anything nice.”

Even a Republican, Puerto Rico’s nonvoting House member Jenniffer González, scolded Trump over his comments, tweeting that “hurricanes are no one’s fault. This is the time for all of us to stand shoulder to shoulder to help our fellow Americans suffering from a natural disaster.”

And while Cruz explicitly told the president to remain hands off in the coming days, she acknowledged that he did not deserve all of the blame for the fumbled response to the 2017 storms that left nearly 3,000 dead and parts of the island without power for almost a year. The island has still not fully recovered from the disasters, Cruz said. 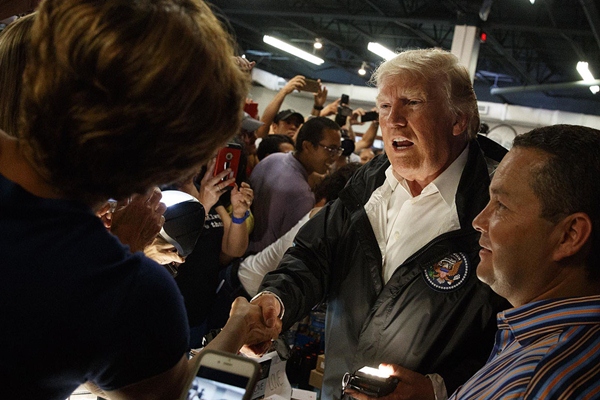 Noting that Puerto Rico has seen less than half of the nearly $40 million in aid approved by Congress, Cruz allowed that at least some blame lies with former Gov. Ricardo Rossello, who resigned earlier this month following a federal investigation into corruption in his administration and the leak of his comments in a profanity-laden group chat.

Trump’s feud with Puerto Rico has cropped up sporadically over the past two years.

Trump has invoked his administration’s efforts in Puerto Rico during subsequent hurricanes, dubbing himself the “best thing that’s ever happened to Puerto Rico,” while at times referring to Congress as “foolish” for continuing to approve more disaster aid money for the troubled island.

He has declined to recognize the death toll from the two hurricanes, which was revised upward to almost 3,000 after an independent study debunked the official death toll of 64. Trump has cast doubt on the revision, labeling it a politically motivated smear campaign.

Trump has used his repetitive overstatement of the amount of disaster relief Puerto Rico’s received from his administration to justify attempts to decrease the amount of aid for the island, even as he has pushed for more hurricane relief money for states like Texas and Florida. His opposition to Puerto Rico aid held up a massive relief package earlier this year before the president relented after months of deadlock.

And just this week, Democrats cried foul following the news that Trump administration plans to divert $271 million from various Department of Homeland Security accounts — including $155 million in federal disaster aid — to beef up funding for immigration enforcement. Puerto Rico advocates also howled when it was reported in January that Trump had been briefed on a plan to dip into Puerto Rico disaster recovery funds to fund his desired wall along the southern border.

White House deputy press secretary Hogan Gidley said Wednesday that the administration’s move to shift money around would not affect hurricane recovery or preparedness efforts. And he pledged that the White House would continue to stand by and monitor the situation in Puerto Rico.

“The president has done everything in his power to make sure that the people of Puerto Rico are prepared for this next storm and they are still rebuilding from the last one it’s because of the billion dollars we sent down there,” Gidley said in an interview on Fox News, accusing local politicians of “propping up their own bank accounts as opposed to helping the people of Puerto Rico.”

Cruz on Wednesday vowed that she would not let her past conflicts with Trump draw her attention away from her constituents, arguing that “as he turns his back on us, the American people open their hearts to us.”

“This is about an island nation in the middle of the Caribbean that he can’t blame for being in the hurricane’s path,” she said on MSNBC, citing Trump’s earlier tweets. “Again, if he can’t be supportive, let those that are willing to be supportive take on the task of saving lives.”