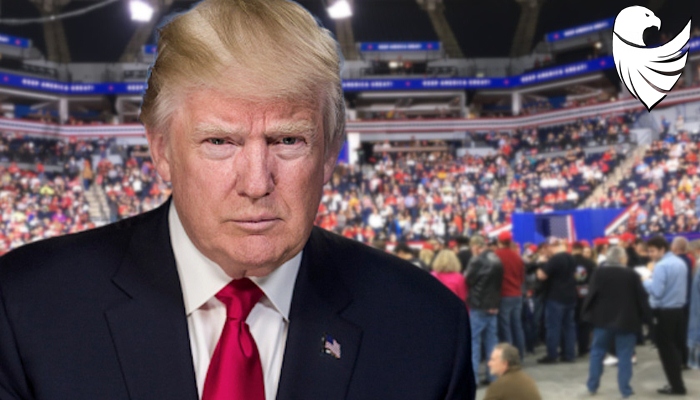 MINNEAPOLIS, Minnesota—Thousands of the president’s most ardent supporters lined the Minneapolis skyway Thursday morning in anticipation of President Donald Trump’s visit to the deeply blue city.

President Trump lost the state by just 1.5 percentage points in 2016 and is personally determined to flip the state red in 2020.

The first person in line to see the president, Dan Nelson of Spring Lake Park, had been there since 7:30 Wednesday morning (well over 24 hours before the start of the rally) and he was far from the only person to camp out.

Camping chairs and Trump gear were scattered about the nine-and-a-half-mile skyway system as groups of supporters were lining up as early as 4:00 Thursday morning.

Luckily, Minneapolis is home to the largest enclosed skyway system in the world, though law enforcement shutdown skyway entrances immediately surrounding the Target Center, leaving just one entrance open on Washington Avenue—several blocks away from the Target Center. 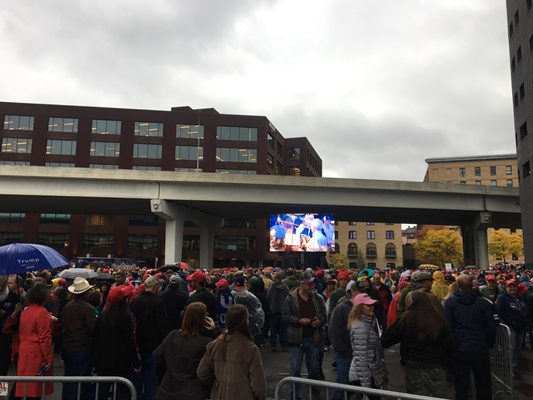 Hundreds of Trump supporters were wearing “Cops for Trump” t-shirts, which went viral after the president retweeted a link to purchase the shirts. The shirts took their inspiration from a new Minneapolis Police Department policy that prohibits off-duty officers from wearing their uniforms at political events.

Line for tonight’s Trump rally is no joke. pic.twitter.com/5WzdnHe8Rx

Police Officers Federation of Minneapolis President Lt. Bob Kroll wasn’t pleased with the new policy, which was announced just a day after Trump revealed his plans to visit the state. So he took matters into his own hands and began selling “Cops for Trump” t-shirts, which a number of supporters were sporting behind the president as he spoke.

The crowd of protesters outside the Target Center grew in size as the rally approached. Target stores around the city were reportedly running out of poster board ahead of the rally.

First Avenue, an iconic music venue across the street from the Target Center, set up a baby Trump blow-up doll on its rooftop. The business announced that it would donate all of its profits from its Thursday night shows to Planned Parenthood as a rebuke of the president.

More and more protesters began arriving as the rally approached with Antifa scheduled to begin its protest at 6 p.m. The right-wing Oath Keepers group was also on the ground to protect Trump supporters as the walked to and from their vehicles.

5:15 pm: The crowd of protesters is much larger now as another group arrived. It’s very noisy out here right now. #trumpminneapolis pic.twitter.com/OsZdMYPn5r

“Lock him up! Lock him up!” a sea of protesters chanted from outside the Target Center. Numerous road closures and a heavy police presence made the downtown area nearly impossible to navigate.

Protesters booed Trump supporters as they walked by. “F— you, traitor,” some shouted at the president’s supporters.

An hour before Trump appearance, the protest crowd has continued to grow. #TrumpMinneapolis pic.twitter.com/4e2GJkksTN

“Shame on you,” another protester said. “Screw you if you voted for Trump.”

Kailey Ball, a 20 year-old student from Prior Lake, joined the crowd in booing as Trump supporters walked by. She wants opponents to show their strength in numbers. “My message to [Trump supporters] is shame on you,” she said. “Screw you if you voted for Trump.” pic.twitter.com/1oAzVsbRog

Others reportedly flipped the middle-finger and shouted various profanities at Trump supporters. Here’s what it was like for one Trump supporter walking through a crowd of protesters:

The protests weren’t confined to the downtown area. Groups of protesters were reportedly seen on a number of overpasses on the outskirts of the city holding anti-Trump signs.

Signs hanging up over 394 in both directions in St. Louis Park ahead of ⁦President Trump’s campaign event tonight ⁦@FOX9⁩ pic.twitter.com/oWWi33rdhG

The Minneapolis city government was openly against the president’s visit from the moment it was announced. City Council President Lisa Bender and Council Member Steve Fletcher participated in the anti-Trump protest outside the arena.

“Standing in unbreakable solidarity with our union strong Minneapolis community. We stand together ready to organize and elect a President of the United States who will return dignity to the office, stand up for working people and for all of our kids’ futures,” Bender wrote on Twitter.

Standing in #unbreakablesolidarity with our #unionstrong Minneapolis community. We stand together ready to organize & elect a President of the United States who will return dignity to the office, stand up for working people and fight for all of our kids’ futures. pic.twitter.com/pMmgsd2irn

Council Member Jeremy Schroeder participated in a “workers against Trump” march ahead of the rally.

Rain won't stop the Workers Against #TrumpMinneapolis March! Be safe out there everybody. pic.twitter.com/OSzLva1LNr

Minneapolis Mayor Jacob Frey was engaged in a Twitter spat with the president for most of the week as they continue to debate who will cover the cost of Thursday night’s security bill. Frey issued a proclamation Thursday afternoon declaring it “Love Trumps Hate” day in the city of Minneapolis.

Frey then sent out a fundraising pitch in which he called President Trump “hateful” and “divisive.”

“This is an important moment for our city, and we need to show the President that we are united today, more than ever,” Frey said. “He has attacked our city because he thinks he can win by dividing us. But today, we will stand behind our diverse communities and the people who continue to make our city—and this country—great.”

Mayor @Jacob_Frey also put out a fundraising appeal this afternoon, with the e-mail header “Tell Donald Trump we are united” #TrumpMinneapolis pic.twitter.com/z9Gy6Kuvbh

Vice President Mike Pence touched down in Minneapolis around 4 p.m. and attended a business roundtable in Lakeville with senate candidate Jason Lewis. First Lady Pence and Lara Trump were in the city waiting after participating in a Women for Trump forum Wednesday night.

Supporters were allowed in the venue shortly before 4 p.m. and the space quickly filled up. With a capacity of nearly 20,000, the lower level of the Target Center was completely full 30 minutes before the president spoke and most of the upper section was beginning to reach capacity.

One hour until ⁦@realDonaldTrump⁩ is scheduled to speak. Lower bowl inside Target Center largely full. Several hundred on floor, upper level clear save for a couple sections. pic.twitter.com/R9kOSBI7kz

As is usual for Trump rallies, a number of public figures began warming up the crowd hours before the president’s arrival. Kroll and MyPillow CEO Mike Lindell were among the first speakers.

“You’ve got one heck of a mayor here,” he said. “Man, that’s a bad mayor. You guys got to all show up and vote him out next time.”

See below for more sights and sounds from the rally:

Somewhere in the crowd of protesters along 1st Avenue in front of Target Center. Chanting in unison, “hey, hey Donald Trump has to go” pic.twitter.com/RBeIq35FTY

A moment of tension when two men on motorbikes revved their engines and argued with protesters and demanded to pass through the dense crowd. Minneapolis police intervened and the men turned around. #TrumpMinneapolis pic.twitter.com/keuqsd1Hag

In line at Trump rally and now we are Losing Our Religion. The music is getting louder. pic.twitter.com/tPvVjdlgqi

A look inside Target Center two hours before #TrumpMinneapolis. pic.twitter.com/TTUGiBPH6X

← Iconic First Avenue Plans to Donate Profits to Planned Parenthood on Day of Trump Rally ← VIDEO: Trump Shares Video of Massive Crowd of Supporters Waiting for Him in Minnesota