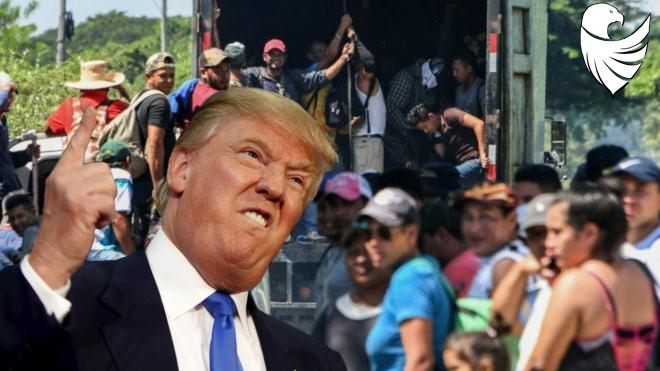 Mexico Braces for the Return..
New reports indicate that the Mexican government is preparing for the potential return of as many as 70,000 illegal aliens from the US to just one area in Mexico during the 2019 year, with President Trump vowing to deport millions.
Now, the US is set to begin deporting hundreds of detained illegals in coming weeks, as US law enforcement officials struggle to cope with overcrowding in detention centers due to the continued surge of illegal migrants.
Officials have shared alarming numbers showing approximately 100,000 migrants and denied asylum seekers attempting to enter the country each month for three consecutive months, and have repeatedly sought assistance from lawmakers.
In response to President Trump’s recent threats to impose tariffs on Mexico in regards to the growing number of migrants, Mexican officials have moved quickly to take steps towards combatting the problem.

From The Daily Caller:
Mexican government officials are bracing to accept more illegal migrants than they likely can handle in order to meet their end of a deal with the Trump administration.
As many as 70,000 illegal immigrants in the U.S. are expected to be sent to Juarez in 2019, according to the chief of the Chihuahua State Population Council who spoke to The Washington Post. More than 200 undocumented migrants were booted to the Mexican border town Thursday, doubling the amount from the day before.

The number of illegal immigrants sent to Juarez is only expected to keep climbing, with as many as 500 migrants from El Paso, Texas, to begin arriving daily in the next few weeks.

The surge of illegal migrants heading out of the U.S. and back to Mexico is a break from past protocol. Mexico has only accepted about 10,000 migrants border-wide in 2019, according to WaPo. However, per an agreement reached with the White House, its government has agreed to accept a dramatically higher number of U.S. asylum seekers, keeping them within Mexican borders while they wait for their claims to be processed in U.S. immigration courts.
Mexico has also significantly stepped up immigration enforcement.

Around 1,000 Mexican agents have already been deployed to the country’s northern and southern borders, according to the National Migration Institute. Its government plans to have as many as 6,000 National Guard troops stationed at its border with Guatemala, a chokepoint for U.S.-bound migrants from Central America.

The efforts appear to be making progress. Mexican authorities were able to apprehend 791 illegal migrants hiding in tractor-trailer trucks Saturday — a massive haul.
“They’re sending us all back,” Julio Alberto Lopez told WaPo.
Lopez, a 45-year-old Guatemalan who said he thought he could successfully enter the U.S. illegally if he brought his son, was promptly sent back to Juarez after getting apprehended.
“I thought they would give me a chance, with my son.”

However, it’s yet to be seen if Mexico’s resources can handle a vast amount of illegal immigration. Widespread corruption and a lack of infrastructure could prove calamitous.
There are roughly a dozen migrant shelters in Juarez with the capability of holding 1,500 individuals — a fraction of what the city is expected to begin detaining. Additionally, illegal migrants are claiming Mexican law enforcement officials were accepting bribes to pass through to the U.S. border — $15 to $20 per person.
Източник: theconservativeopinion.com

← Haters feed on hatred. Give them back with love. ← God’s people are like the coals if they can not burn you, they’ll make you black.