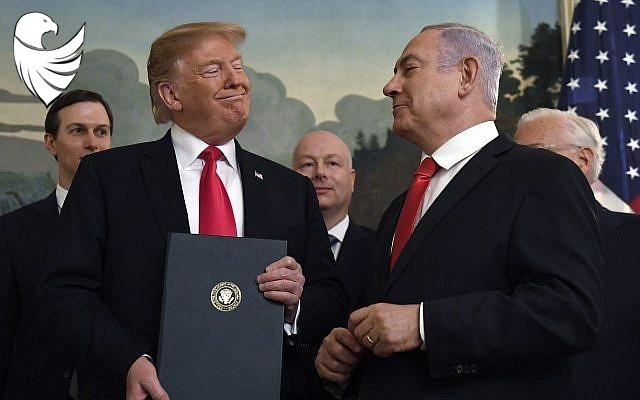 Prime Minister Benjamin Netanyahu and US President Donald Trump are considering a grand presidential gesture on the US’s commitment to Israeli security in the coming days, including a possible statement on the two allies’ intent to enter into a defense pact, according to a report Monday.

The two leaders are hoping to use the move to boost the Israeli premier’s electoral prospects ahead of the September 17 vote, Haaretz reported.

The most likely action, the newspaper said, was a vow by Trump — with few practical implications — that the US will defend the Jewish state from an potential existential threat.

A more substantial option would be a joint declaration by both leaders that they will seek a mutual defense pact between the two countries, the main upshot of which is that each side is obligated to come to the aid of the other in the event of military conflict.

Recent months have seen talk of such an accord, with some Republican lawmakers seen to support it. Negotiations on a pact would likely take months, but the political benefits of an announcement could be felt immediately.

The two militaries already cooperate closely, sharing intelligence, holding joint drills and collaborating on defense on a regular basis. But a pact would deepen each side’s commitment to the other and potentially add new obligations.

Any potential defense pact is seen as highly controversial with the Israeli defense establishment, with officials concerned an accord on tighter defense cooperation could tie the hands of the Israeli military in certain undertakings, or at the very least limit its freedom to act independently.

In the past it would have been unthinkable for a US president to be seen as meddling in an Israeli election or preferring one side over the other, but the Trump-Netanyahu relationship has seen both leaders largely drop any pretense of not involving themselves in the internal politics of each other’s countries.

Just two weeks before the April election, Trump recognized Israeli sovereignty over the Golan Heights, in a seismic shift in US Mideast policy. And a day before the vote, the administration designated Iran’s Islamic Revolutionary Guard Corps a terrorist organization — another win for Netanyahu.

Israeli officials were said to be considering seeking additional diplomatic gestures to boost Netanyahu’s image ahead of the national vote: a potential meeting with Russian President Vladimir Putin to bolster the premier’s portrayal as sharing close relations with top world leaders (also serving as a possible boon to his popularity with the much-coveted Russian vote); or another tripartite meeting of US, Russian and Israeli national security advisers to discuss regional security.

Two weeks before the September election, Netanyahu’s Likud party is neck and neck in the polls with rivals Blue and White, but the prime minister remains the most likely candidate to be tasked with forming the next government.

However, he does not necessarily have a clear path to doing so.

Netanyahu received the support of a majority of Knesset members following elections in April and was tasked with forming a government, but was unable to do so after Yisrael Beytenu chief Avigdor Liberman refused to join his prospective coalition unless a bill formalizing exemptions to mandatory military service for ultra-Orthodox seminary students was passed without changes.

Coming up one seat short of a majority without Yisrael Beytenu, Netanyahu pushed through a vote to dissolve the Knesset and call fresh elections rather than have another lawmaker get a shot at assembling a coalition. It was the first time in Israel’s history that elections failed to result in a government.

Liberman has vowed to force a unity government of Yisrael Beytenu, Likud and Blue and White if neither Netanyahu or the latter party’s leader Benny Gantz are able to form a coalition without him after the vote.

But, if polling is to be trusted, neither will be able to form a coalition without Liberman, who is projected to win around 10 seats in the next vote — double his current tally.

Recent weeks have seen growing claims by both Liberman and Blue and White’s leadership that Likud officials have indicated to them they will move to replace Netanyahu as party leader if he fails to form a government for a second time.

← Historian: Trump ‘Far Ahead’ of His Predecessors on Media Availability ← Trump knocks London mayor and defends golfing as hurricane nears