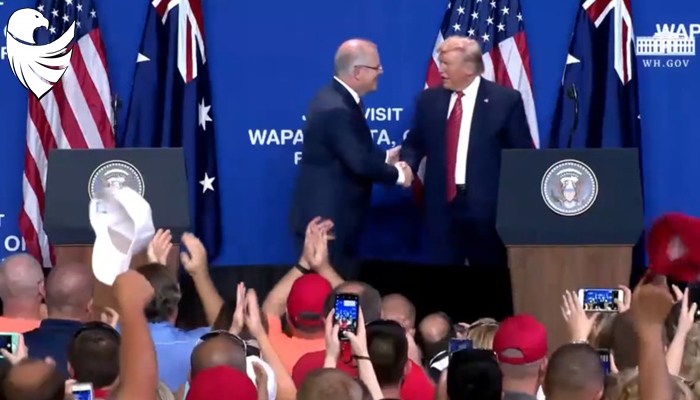 WAPAKONETA, Ohio – Two countries played a key role in the building of the new Pratt Industries plant in Wapakoneta – Australia and the United States. Australian Prime Minister Scott Morrison and President Donald J. Trump, visited that new plant on Sunday. The opening of the recycled paper and cardboard plant represents, “Promises made, promises kept,” on the part of President Trump and Pratt Industries, which is owned by Aussie billionaire Anthony Pratt.

One of Donald Trump’s top ten campaign promises, according to Politifact, was to, “Bring manufacturing [jobs] back.” In President Trump’s first year alone, nearly 3 million new jobs were added and over 300,000 of those were manufacturing.

Anthony Pratt is a supporter of the President and he promised to invest in the United States and create thousands of new jobs.

“In 2017, Pratt Industries pledged to President Trump to invest $2 billion and create 5,000 high paying manufacturing jobs in the Midwest. It’s appropriate that on this 50th anniversary of the moon landing we celebrate our new billion dollar paper mill, being constructed in Wapakoneta ohio, the birthplace of the first man to walk on the moon, Neil Armstrong. That’s one small step for man, one giant leap for Wapakoneta,” the narrator said.

Local media were tweeting about the event as supporters began arriving. People were sent to the local high school to park and be shuttled to the plant. Doors were scheduled to be closed at 4:00pm, but supporters on school busses were turned back around 3:30. WDTN reported, “Hundreds of people who planned to see President Trump are being shuttled back to Wapakoneta High School from Pratt Industries.”

JUST IN: Hundreds of people who planned to see President Trump are being shuttled back to Wapakoneta High School from Pratt Industries.

Several people who have returned tell me they had tickets to the event, but the venue reached its capacity. @WDTN pic.twitter.com/cZ4VgD65vv

One family that was on a bus that was turned away were the Moellers. Kasie, a 21-year-old senior at Ohio Northern and her parents Matt and Melissa, wore their Trump 2020 shirts. They were disappointed, but had had the privilege of seeing the President earlier this year.

“We saw him in March in Lima. He shook everyone’s hand,” Melissa told The Ohio Star. “He walked right past Secret Service so he could greet the crowd. We really enjoyed seeing him.”

Kasie Moeller was asked why she had come out to see the President. “Because I like Trump. I like all the jobs he’s created and how he’s bringing more jobs back to the United States.”

Her father Matt shared that he likes the entertainment.

Meanwhile inside the new plant WHIO had pics of the crowd that had amassed before 4:00pm. “It’s a packed house already!”

It is a packed house already! @realDonaldTrump is scheduled to speak at @PrattIndustries in Wapakoneta at 5:30 p.m. pic.twitter.com/Y0lUaODOki

President Trump, Prime Minister Morrison and Anthony Pratt toured the facility and met with workers prior to greeting supporters. Trump stopped occasionally to speak to the press. Talking about the plant, the President said, “So that’s 100% recycled paper…they start off with waste, garbage…It’s great news for America…It’s been a great partnership and it’s been better with Scott [Prime Minister Morrison].”

“Mr. President, if it wasn’t for your Presidency, this mill wouldn’t be here today,” owner and Trump supporter Anthony Pratt stated. “We are now the largest Australian employer of Americans with 9,000 American jobs.”

President Trump told the press he’d asked Pratt, “Ohio [workers], are these as good as I think?”

When he addressed the crowd, President Trump said, “All the forgotten men and women – you’re not forgotten anymore!” He shared that one quarter of all new jobs were manufacturing jobs and 600,000 people had joined the workforce.

“We proudly declare that Pratt Industries in this great, great state of Ohio is open for business!” the President proclaimed.

Prime Minister Morrison wrapped up the evening by acknowledging America’s veterans and thanking them for their service. “What we’re celebrating here is jobs…Anthony’s [Pratt] a wonderful Australian…27 states he now is in [in the U.S.], 70 factories – when we make a promise, we keep it!”

And the supporters did just that.