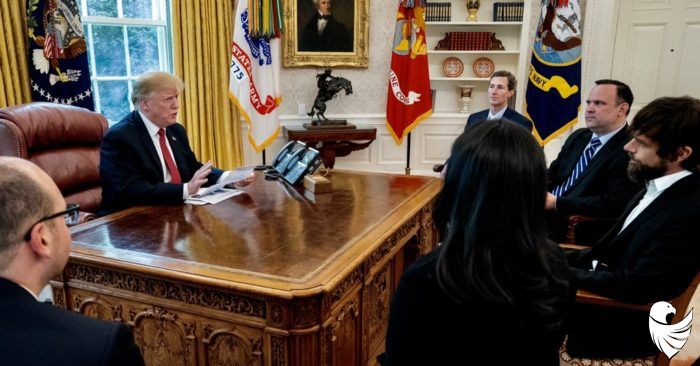 During a live call, President Donald J. Trump claimed social media platform Twitter is making it hard for Twitter users to follow him and for him to communicate with his supporters.

“I have millions and millions of followers, but I will tell you they make it very hard for people to join me on Twitter; they make it very much harder for me to get out the message,” the president told Fox Business host Maria Bartiromo on June 26.

“If I announced tomorrow that I was going to become a nice liberal Democrat, I would pick up five times more followers,” President Trump added.

This is not the first time the president has explained that social media is biased against him. He has taken to Twitter on various occasions to explain why he uses social media to get his message out, citing fake news and media bias against him, calling it part of the witch hunt against him.

And the president is not alone in his thinking. Various supporters of the president have rallied behind him, claiming that Twitter and Facebook are silencing conservative voices on purpose.

Their complaints were loud enough that Jack Dorsey, Twitter’s CEO, met with the president in a closed-door meeting earlier this year in April.

In July 2018, Twitter was accused of shadow banning conservatives. Shadow banning is the act of blocking a user’s content on social media sites, in such a way that the user doesn’t know it’s happening to them.

VICE News reported that several supporters of the Republican Party no longer appeared in the auto-populated drop-down search menu on Twitter.

When VICE reached out, Twitter directed Vice News to a May 2018 blog post explaining Twitter’s new approach to combating troll-like behavior. The company told VICE, after making changes to their platform, the “result is that people contributing to the healthy conversation will be more visible in conversations and search.”

Basically, they were shadow banning any accounts associated with troll-like engagement, whether the actual account posted troll-like posts or not. Many alt-right accounts were shadow banned along with Congress members such as Ronna McDaniel, Chair of the Republican National Committee; Mark Meadows (R-N.C.), Jim Jordan (R-Ohio), among others.

However, VICE reported that lawmakers who are Democrats didn’t have the same shadow banning issues.

After the initial report, VICE reported the next day that Twitter appeared to have adjusted the platform overnight to no longer limit the visibility of some prominent Republicans in its search results.

Kayvon Keykpour, head of Twitter product had tweeted that changes would be made soon.

After compiling data from January 2015 to January 2019, Hanania found there were 22 very prominent individuals or political parties known to have been banned from Twitter. He used the proxy of whether their ban was news coverage-worthy to determine their prominence.

Out of the 22 politically active individuals who expressed a preference in the 2016 U.S. election, 21 supported President Donald Trump.

Only one, Rose McGowan, was a Clinton supporter.

← Trump for the G-20 leaders: Dear boys ← Trump conditions for ending the war