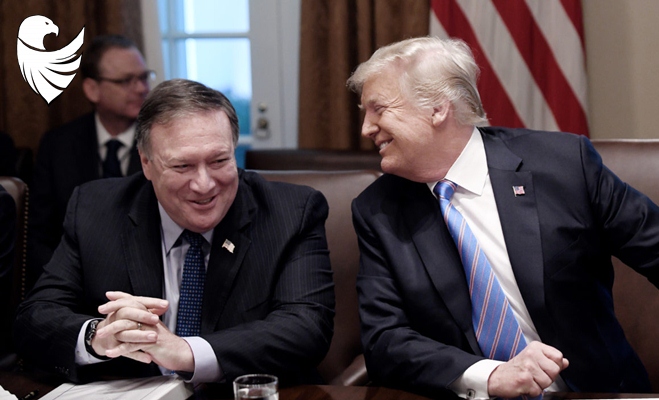 But in a sign of how strained relations have become between Washington and Brussels over an array of issues, including Iran, trade and climate change, Pompeo will not see any of the EU leaders currently in office. Commission President Jean-Claude Juncker serves until November 1 and Council President Donald Tusk until December 1.

“I essentially want to try to reset the relationship, and I want to try to start off on the right foot with the four leaders,” Sondland said in the telephone interview on Monday from Poland, where he had attended a World War II commemoration along with U.S. Vice President Mike Pence.

The EU and the U.S. are currently at odds on wide range of big-ticket diplomatic issues, especially a simmering trade dispute and a sharp disagreement over how to deal with Iran following Trump’s unilateral withdrawal last year from the nuclear agreement, known as the Joint Comprehensive Plan of Action.

Sondland said that the Trump administration remains in contact with Juncker, Tusk and foreign affairs chief Federica Mogherini, and would work with them as needed during their remaining months in office.

“We respect their roles and we will continue to reengage with them on all kinds of things,” Sondland said.

Pressed on the possibility that Pompeo’s meetings with the new officials might signal that Washington has given up on the EU’s existing leadership, Sondland denied this is the case and insisted the goal is to get a running start with the new team.

“I think ‘writing off’ is too strong,” Sondland said, repeating how the question was phrased. “What we are trying to do is to create the environment for a very smooth transition, so the day they take office we are already talking to them. So we don’t have a six-month learning process. That would probably be more detrimental to the relationship, to spend the first six months or a year trying to figure each other out.” 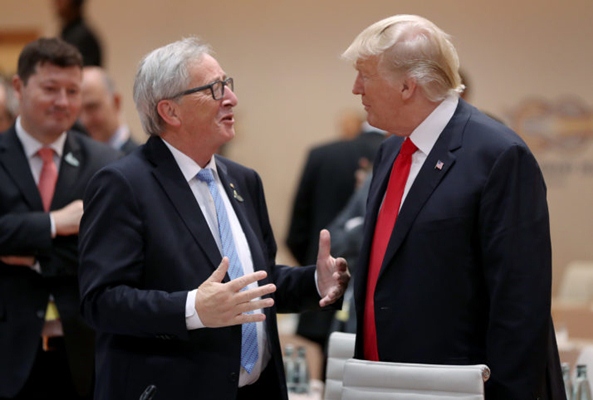 During his mandate, Commission President Jean-Claude Juncker went to Washington and helped broker a tentative truce in the tariff war | Chip Somodevilla/Getty Images

However, the fact that the U.S. and its European counterparts, traditionally the closest of Western allies, would need to figure each other out at all is itself an admission that ties have become increasingly tense since Trump took office in 2017, intent on dismantling established policies, including trade relations, that he has loudly derided as unfair to the U.S.

To the dismay of the Europeans, Trump pulled out of the Paris climate accords during his first months in office, and then removed the U.S. from the Iran nuclear deal, leaving it hanging by a thread. He also upended several leadership summits, including a G7 meeting in Quebec last year and a NATO leaders’ summit in Brussels a month later, where he threatened that the U.S. could go its own way if other allies don’t further increase spending on their militaries. He also unilaterally imposed tariffs on EU steel and aluminum, prompting retaliatory measures by the EU.

Juncker went to Washington and helped broker a tentative truce, but Trump has repeatedly threatened to escalate a trade war by imposing tariffs on other EU goods, including cars and French wine.

Still, Trump professed himself generally pleased following a G7 leaders’ summit in Biarritz, France last week. He expressed openness to a plan by French President Emmanuel Macron to arrange a meeting with Iranian President Hassan Rouhani. And while there was no immediate peace deal announced in the trade dispute, there was also no immediate escalation.

Pompeo is generally viewed with guarded skepticism in Brussels given both his allegiance to Trump and the president’s willingness to overrule even his most senior Cabinet secretaries without warning. While in Brussels, he is also expected to see NATO Secretary-General Jens Stoltenberg.

“We want to reset the relationship and I hope these meetings will be the catalyst to do that” — U.S. Ambassador Gordon Sondland

Pompeo had been expected to travel to Poland together with Trump and make a stop in Brussels, but Trump cancelled the trip because of the looming threat from Hurricane Dorian and sent Pence in his place. Sondland said he prevailed on Pompeo to travel separately to Brussels from Washington to meet the four leaders.

Sondland said he expected that the meetings, beginning with a session with von der Leyen on Monday, would set the framework for a more fruitful relationship.

“I am now engaged in several conversations with all four of these leaders and I sense a very positive approach to EU-U.S. relations from all four of them — not that these issues aren’t going to be difficult,” he told POLITICO.

He said the meeting would be casual, without any prescribed agenda, but that he expects trade, Iran, EU defense initiatives, China and 5G technology to be among the topics to come up.

“It’s probably time to turn a fresh page, and quickly find out where we can find common ground,” Sondland said. “We want to reset the relationship and I hope these meetings will be the catalyst to do that.”

← Why Trump may protect one group of immigrants ← Historian: Trump ‘Far Ahead’ of His Predecessors on Media Availability