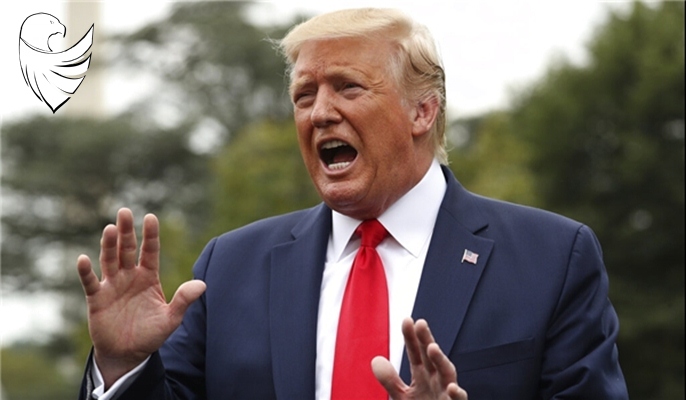 TEHRAN (FNA)- US President Donald Trump stated that he has authorized the release of the US’ “strategic petroleum reserve” in a bid to control the global oil prices, which are already hiking after 10 Yemeni drones attacked Saudi Aramco facilities.

“Based on the attack on Saudi Arabia, which may have an impact on oil prices, I have authorized the release of oil from the Strategic Petroleum Reserve, if needed, in a to-be-determined amount sufficient to keep the markets well-supplied,” Trump said in a tweet early Monday, World News reported.

“I have also informed all appropriate agencies to expedite approvals of the oil pipelines currently in the permitting process in Texas and various other States,” he added.

Ten drones flown by Yemen’s Ansarullah movement targeted Saudi Arabia’s key oil facilities in Abqaiq and Khurais on Saturday. The attacks shut down about 50 percent of the kingdom’s crude and gas production, and cut the state oil giant’s crude oil supply by around 5.7 million barrels per day.

An oil industry source briefed on the developments noted on Sunday it is unclear how long the oil production shutdown will continue, as it is impossible to fix the “big” damages overnight.

Aramco has given no timeline for output resumption. However, a source close to the matter told Reuters the return to full oil capacity could take “weeks, not days”.

The US’ release of its Strategic Petroleum Reserve (SPR) has been rare historically and only used as a last resort. There are more than 600 million barrels in the SPR.

A sustained spike in fuel prices could mark the latest threat to a world economy already under significant pressure from the US-China trade war and Washington’s sanctions against Iran’s oil exports.

Reuters on Sunday quoted traders and analysts as saying that the oil prices may spike to as high as $100 per barrel if Saudi Arabia fails to quickly resume oil supply lost after attacks.

Other experts say critical oil supplies lost due to the attacks can only be compensated if the United States eases its sanctions on sale of crude by Iran.

Trump also said that the United States is “locked and loaded” for a possible response to the recent Yemeni drone attacks on Saudi Arabia’s oil facilities.

The American president added that Washington has a “reason to believe that we know” who is responsible for the attacks carried out against the kingdom’s key oil facilities.

US Secretary of State Mike Pompeo put the blame for the operation on Iran on Sunday, claiming, “Tehran is behind nearly 100 attacks on Saudi Arabia” and that “there is no evidence the attacks came from Yemen”.

Tehran, however, dismissed the allegation, saying Washington seems to be shifting from a failed campaign of “maximum pressure” to one of “maximum lying” and “deceit” against the Islamic Republic.

“Such allegations and blind and fruitless remarks are meaningless and not understood in diplomatic framework,” he said.

Iranian Foreign Minister Mohammad Javad Zarif also responded to Pompeo’s claim, stressing that the American diplomat is now resorting to a campaign of “max deceit” against Tehran after the administration he serves failed to achieve the desired results from its anti-Iran “maximum pressure” policy — which has seen Washington impose the toughest of economic sanctions against the Iranian nation.

“US & its clients are stuck in Yemen because of illusion that weapon superiority will lead to military victory,” Zarif wrote on Twitter.

← Trump says U.S. ‘locked and loaded’ after attack on Saudi oil ← Why Trump Will Win: ‘The Evidence of Things Unseen’