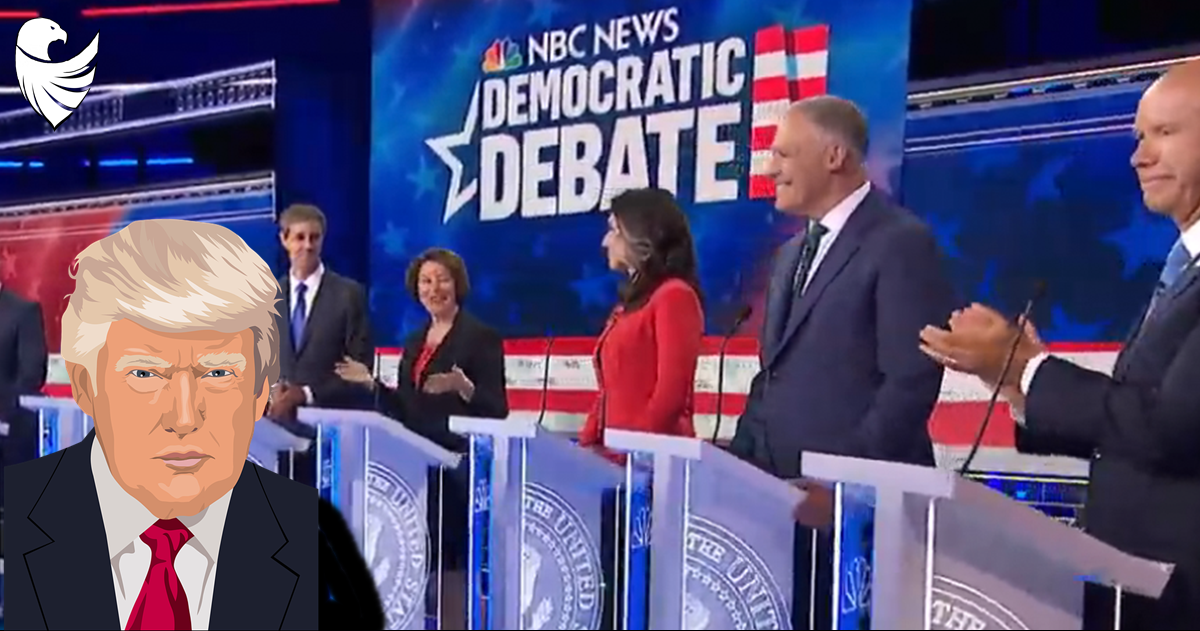 President Trump’s 2020 re-election campaign is gearing up for what they call an “aggressive” response to today and tomorrow’s Democrat debates.

With the upcoming election drawing ever nearer, Trump’s team and the RNC have begun preparing for what will be a heated campaign which will utilize social media while taking the fight to Democrats in key states.

According to Trump’s team, another key focus is Democrat rival Joe Biden, who currently appears to be the likely nominee to oppose Trump in the upcoming election.

The Trump campaign and Republican National Committee are ramping up an “aggressive” rapid response effort both nationally and locally for the Democratic debates, with a war room locked and loaded with live tweeters, real-time fact-checkers, and new hashtags in an effort to maintain momentum for Trump 2020.

As the first group of Democratic candidates takes the debate stage Wednesday night, RNC and Trump campaign officials will be hunkered down in their operation center out of a hotel in downtown Miami.

The rapid response team will consist of RNC, Trump campaign, and Trump Victory officials who are slated to live tweet the debates, complemented by social media graphics, fact-checking in real time and email blasts. The responses, according to Gorka, will be in English, Spanish and Mandarin.

“We will be using the ‘Lead Right’ hashtag for the field program, which is part of the Trump Victory leadership initiative, and the ‘Trump 2020’ hashtag that we typically populate for big events,” Gorka told Fox News, noting that the hashtags were used last week when President Trump formally launched his 2020 re-election campaign.

“When you see #LeadRight trending, you feel powerful. You feel part of a movement, which we’re trying to create,” Gorka said.

The emails will be sent by the national RNC communications team. Wednesday’s first offers a sense of their tone, headlined: “Democrat Debate: Night(mare) One–Tonight’s Debate Will Be A Who’s Who Of Radical Progressives Offering A Smorgasbord Of Socialist Policies, Irresponsible Give-A-Ways And Half-Baked Ideas.”

Ahead of the debates this week, the RNC and Trump Victory are also hosting events in more than 20 states in an effort to “push and to localize what the policies of the Democratic field would mean.”

In Miami on Wednesday, RNC Chairwoman McDaniel hosted an event at Versailles—a famous Cuban restaurant and frequent campaign stop for candidates passing through Miami, known for its food and “a side of politics​ ​.” McDaniel’s stop, like others across the country this week, was focused on highlighting “the left-leaning lurch of the Democrat Party toward socialism.”

The RNC is slated to host a similar event on Thursday ahead of the second debate, focused on Hispanic unemployment and the “economic progress made over the last three years.”

But Gorka suggested Democrats would go too far, saying his team is curious what the “next litmus test” will be for Democratic candidates.

“What I’m looking forward to tonight and tomorrow night is to see what is the craziest policy proposal that gets thrown out and shocks—and then becomes the norm by the time we get to Detroit next month,” Gorka said. “The Democrats trip over themselves to try to establish themselves as the progressive standard-bearer for the new Democratic Party, so we’ll see who tries to take that mantle tonight and tomorrow night.”

Gorka said team Trump is focused on former Vice President Joe Biden, the current front-runner in the crowded Democratic primary field who they said would be “his own worst enemy” as he attempts to “conform to today’s Democratic Party.”

“Every election boils down to either stay the course or to change, and if the Democrats are banking on a change election, Joe Biden is not a change agent,” Gorka said.

The Trump campaign and RNC’s efforts come after Trump announced his second White House bid in Florida last week. The campaign-party operation raised $24.8 million in less than 24 hours—a figure that blew past what any of the Democratic candidates raised in the entire first quarter. According to an RNC spokesman, the fundraising came through the Trump re-election campaign and joint-fundraising committees Trump Victory and Trump MAGAC (Make America Great Again Committee).