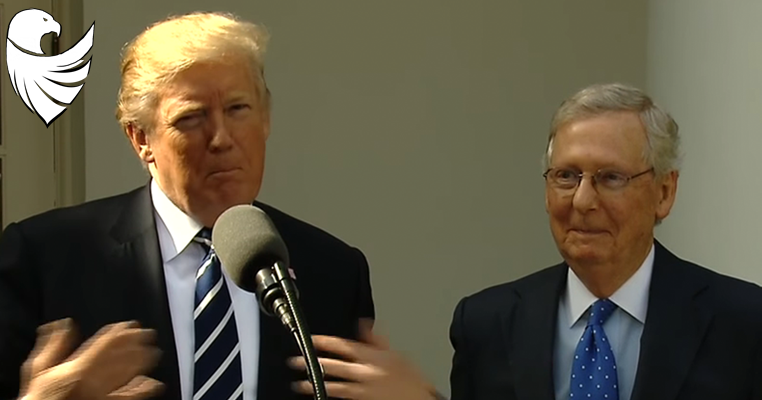 allowed #MurderMoscowMitch to trend but shut down Senator McConnell’s account when he posted video of an angry mob outside his house. @GaRepublicans will not spend one cent on Twitter ads while I am State Chairman until this bias is addressed. @Team_Mitch

The people at @Twitter allowed #MurderMoscowMitch to trend but shut down Senator McConnell’s account when he posted video of an angry mob outside his house. @GaRepublicans will not spend one cent on Twitter ads while I am State Chairman until this bias is addressed. @Team_Mitch

President Donald Trump’s campaign and the major, national Republican campaign committees announced Thursday they will stop spending money to advertise on Twitter after the social media platform locked Majority Leader Mitch McConnell’s account for posting a video of violent threats against him.

“Twitter’s hostile actions toward Leader McConnell’s campaign are outrageous, and we will not tolerate it,” said Jesse Hunt, a spokesman for the National Republican Senatorial Committee. “The NRSC will suspend all spending with Twitter until further notice. We will not spend our resources on a platform that silences conservatives.”

Richard Walters, the chief of staff of the Republican National Committee, said in a tweet that the RNC and the Trump campaign will also not advertise on Twitter “until they address this disgusting bias.” Parker Poling, the executive director of the National Republican Congressional Committee, also said the House campaign arm would follow suit in a tweet of her own.

Meanwhile, Senate Leadership Fund president and CEO Steven Law told POLITICO the top pro-GOP super PAC for Senate races would pull its spending on Twitter due to the company’s “unfair treatment” of McConnell.

The moves comes after McConnell’s campaign account was locked Wednesday for posting a video of protesters outside his home that included violent threats against the Kentucky Republican. A Twitter spokesperson confirmed the account was temporarily locked for violating the company’s “violent threats policy.” McConnell’s campaign manager, Kevin Golden, said the campaign unsuccessfully appealed the decision and accused Twitter of hypocrisy.

The new halt in spending on Twitter is an escalation from Republicans, who have long complained the social media company of harboring a bias against conservatives. POLITICO reported Wednesday that the White House is circulating drafts of a proposed executive order that would address allegations of anti-conservative bias by social media companies.

The NRSC has spent low five-figures on Twitter so far this campaign cycle, according to Hunt. The committee is planning to raise money off their decision to halt future spending. A fundraising email to be sent from the NRSC Thursday urged supporters to “push back.”