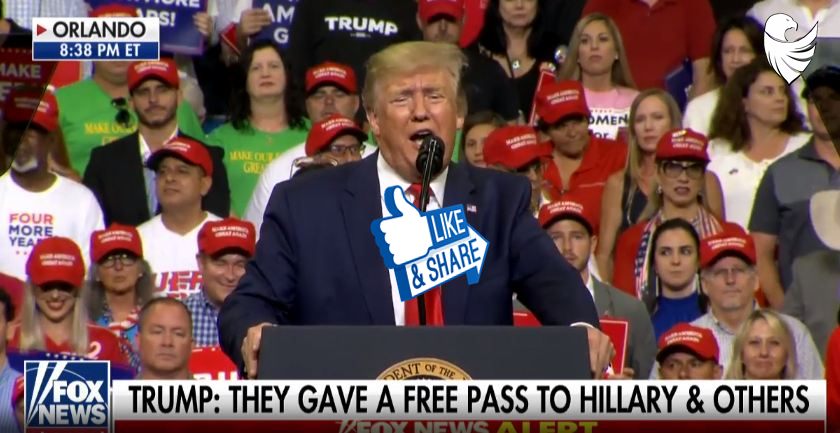 President Trump formally launched his 2020 re-election campaign Tuesday night before a jam-packed crowd in Orlando’s Amway Center arena, and quickly unloaded on the media organizations and government actors he said tried their hardest with “everything they had” to bring down both his candidacy and presidency.

To chants of “USA,” Trump took the stage after brief remarks by Vice President Mike Pence and first lady Melania Trump, and recalled his unlikely rise to power.

“We stared down the unholy alliance of lobbyists and donors and special interests who made a living bleeding our country dry,” Trump said. “The swamp is fighting back so viciously and violently. For the last two and a half years, we have been under siege.”

And after polling the boisterous crowd, Trump appeared to settle on a new campaign slogan: “Keep America Great.”

He went on to tout the economy and the planned Space Force, celebrate the “obliteration” of ISIS, and declare that “Republicans believe that every life is a sacred gift from God” amid a newly energized national pro-life movement.

Just over four years ago, Trump descended through the pink marble and brass atrium of Trump Tower to announce his candidacy for president, the first step on a journey few analysts believed would take him all the way to the White House.

This time, thousands of Trump supporters arrived more than 40 hours in advance to secure a spot in the Amway Center, despite sweltering heat. Some had been camped in chairs for several nights.

Trump told attendees he had begun not only a “great political campaign but a great movement” committed to the idea that a government must “care for its own citizens first.”

He called his election that year as a “defining moment in American history” — and then directed the crowd to “ask them, right there,” referring to the media assembled in the back, which many in the crowd jeered.

In one of the most dramatic moments of the rally, Trump charged that Democrats want a “do-over” of Special Counsel Robert Mueller’s report — and then, his voice approaching a shout, Trump blasted Democrats’ apparent lack of interest in misconduct within their party.

“Our patriotic movement has been under assault from the very first day,” Trump said. He specifically called out the “phony” dossier used by the FBI to secure a secret surveillance warrant to surveil one of his former aides, Carter Page.

After Trump noted that the dossier was funded by the Hillary Clinton campaign and Democratic National Committee (DNC), the crowd again broke into a chant, this time cheering, “Lock her up.”

“If you want to know how the system is rigged, just look at how they came at us for three years with everything they had, versus the free pass they gave to Hillary and her aides after they set up an illegal server, destroyed evidence, deleted and acid-washed 33,000 emails, exposed classified information, and turned the State Department into a pay-for-play cash machine,” Trump said, his voice rising with the crowd’s.

“Lock her up,” the crowd responded again.

“33,000 emails deleted, think of it!” Trump said. “You know, there was a lot of corruption on the other side. But, you know, they get a subpoena from the United States Congress, and they decide they’re not gonna give it, so, Lindsey Graham, they delete and they acid wash — which is very expensive, nobody does it — those emails, never to be seen again!

Many expressed their reasons for why they are excited for President Trump and what he’s done for America thus far.

“But we may find them again somewhere deep in the State Department,” Trump mused. “Can you imagine if I got a subpoena? Think of this — if I deleted one email, like a love note to Melania, it’s the electric chair for Trump.”

For the most part, the rally focused on Trump’s policy successes, on a range of matters including criminal justice reform and the economy.

“Our country is soaring to incredible new heights,” Trump asserted, to loud applause. “Our economy is the envy of the world, perhaps the greatest economy we’ve had in the history of our country, and as long as you keep this team in place — we have a tremendous way to go — our future has never, ever looked brighter or sharper.”

Trump continued: “The fact is, the American Dream is back. It’s bigger, and better, and stronger than ever before.”

The president emphasized his success in appointing federal judges, and lamented Democrats’ treatment of now-Justice Brett Kavanuagh, telling the crowd, “They didnt just try to win, they tried to destroy him with false and malicious accusations” in the name of “political dominance and control.”

“Just imagine what this angry left-wing mob would do if they were in charge of this country,” Trump said. 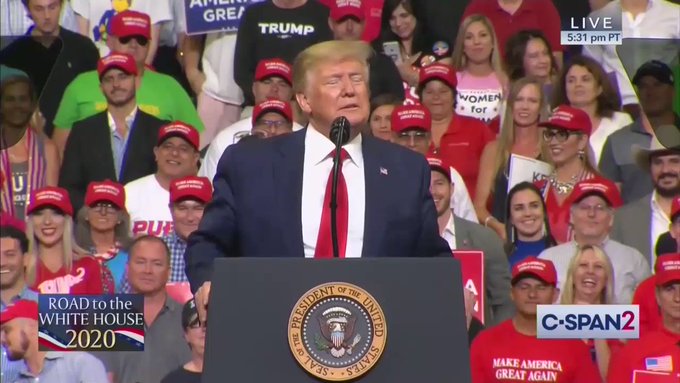 “We just finished [confirming judge] number 107, already approved, sitting on the bench — how about that?” Trump then asked. “By the time we’re finished with the rest, we will have record percentages [of judges appointed] — our percentage will be a record, except for one person. One person has a higher percentage … George Washington.”

At one point, outgoing Press Secretary Sarah Sanders took the stage, bringing the crowd to its feet.

“We want people to come into our country based on merit,” Trump said, after praising Immigrations and Customs Enforcement (ICE) officials as underappreciated heroes securing the border.

He went on to condemn “crazy” Bernie Sanders, and vowed again that America would “never” become a socialist country. 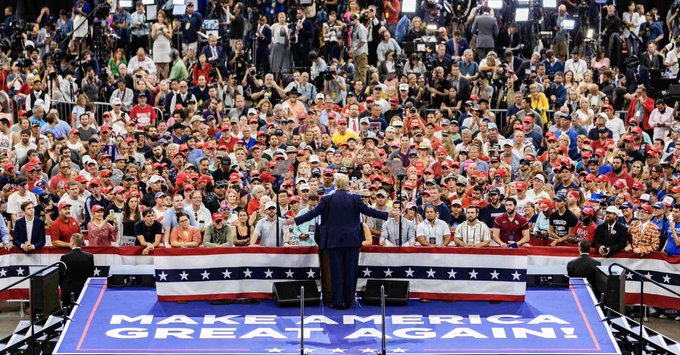 Together, we are breaking the most sacred rule in Washington Politics: we are KEEPING our promises to the American People. Because my only special interest is YOU! #Trump2020

The festive and lively environment was evident both outside and inside the arena. Caps and shirts and mugs and ponchos were being hawked in corners far and wide in Orlando, with slogans ranging from “God, Guns and Trump” to “Trump’s Deplorables” to “Working to Defeat Liberals since 1854.”

“Think of this — if I deleted one email, like a love note to Melania, it’s the electric chair for Trump.”

“Bikers For Trump” volunteer security members managed traffic in and out of the rally areas as jubilant Trump devotees partied to a band while in line, occasionally breaking into “USA, USA” chants.

Others wandered the blocks around the venue urging people to sign a petition to “prevent voter fraud.”

“Only U.S. citizens should be able to vote,” explained Donny, a Jacksonville native. “That’s what we want in Florida.”

Joe Biden, the frontrunner among Democrats in both polling and fundraising, sought to blunt the momentum from the Tuesday launch shortly before Trump took the stage.

ON THE GROUND BEFORE TRUMP’S BIG RALLY, A CARNIVAL-LIKE ATMOSPHERE

“Donald Trump is launching his campaign for re-election tonight and the American people face a choice — we can make Trump an aberration or let him fundamentally and forever alter the character of this nation,” Biden Deputy Campaign Manager Kate Bedingfield said in a statement.

Hats and other merchandise were flying off the racks Tuesday afternoon in Orlando, ahead of Trump’s rally. (AP Photo/John Raoux)

“Our country cannot afford four more years of Trump diminishing America’s role on the world stage, cutting access to health care, ignoring the climate emergency that is an unprecedented threat to our national security, tearing children from their parents at the border, giving enormous new tax breaks to big corporations and the wealthy at the expense of working families, and dividing our country by embracing toxic bigotry and racism that’s antithetical to who we are,” Bedingfield added.

Sanders, meanwhile, hosted an “Ask Me Anything” open forum on Reddit on Tuesday. The self-described democratic socialist condemned what he called Trump’s “rejection of science,” and lamented the “incredible attacks against working families that have taken place under unfettered capitalism.”

Sanders, in a video response to Trump’s address later in the day, issued a series of personal insults. He called Trump a “racist” and “sexist,” among other attacks.

“The working class of this country has been decimated for decades by a coordinated attack from corporate America,” Sanders told one Reddit user. “Bad trade deals have allowed corporations to ship millions of jobs abroad, companies have bitterly resisted unionization and the minimum wage has not been raised for almost 10 years.”

Not all of the participants in Sanders’ Reddit event gave him a warm welcome, however, with some pointing out Sanders’ recent, dramatic rise to wealth.

“People like you have destroyed the working class by taking more of their taxes to fund a corporate-run utopia that never can exist,” one user replied. “Wealth is decided by the rarity of your skill set, not how hard you work, Mr. 3 mansions and an Audi R8.”

Trump is ahead of his Democrat rivals in key battleground states and “voters overall” support re-electing him, a Republican National Committee (RNC) memo obtained by Fox News claimed.  The memo came amid reports of the president struggling in polls putting him up against potential 2020 opponents, including Biden. A Fox News poll showed similar numbers.

But, according to the RNC, its own massive data operation told a different story. According to the committee’s numbers, Trump has a higher approval than disapproval rating in the battleground states of Ohio and Pennsylvania while a majority of Florida voters (53 percent) supported re-electing him.

By Gregg Re | Fox News