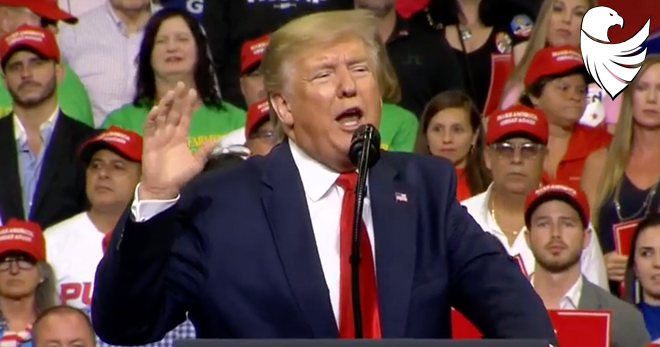 On Monday, President Trump signaled his intent to potentially delay the 2020 census, should the administration be prevented from including a question regarding citizenship.

When asked by reporters, Trump replied, “We’re looking at that,” before quipping, “So, you can ask other things, but you can’t ask whether or not somebody is a citizen?”

The issue remains a point of contention, with Trump having stated the question is “very important to find out if somebody’s a citizen as opposed to an illegal.”

President Trump said Monday he’s looking “very strongly” at delaying the 2020 census if the administration is not allowed to add a citizenship question, an unprecedented move that would surely trigger new legal challenges.

Trump first floated a delay of the census last week after the Supreme Court blocked the administration from including it, demanding that the Commerce Department provide a more clear-cut explanation for the move.

The president said it’s crucial the question be asked because he thinks “it’s very important to find out if somebody’s a citizen as opposed to an illegal.” He said, without citing evidence, that immigrants living illegally in the U.S. are “treated better than the coal miner” suffering from black lung.

The high court’s ruling may preclude the question from being added to census forms. The Commerce Department has said it faces a July 1 printing deadline, but said it could be extended to the end of October under extenuating circumstances.

Legal experts have said delaying the census would violate the Constitution, which says it must take place every 10 years and must count all people living in the U.S. Under federal law, the census must begin by April 1, 2020.

Trump said last week he was asking his legal advisers to examine whether a delay is possible.

← ROME — Pope Francis will celebrate a “Mass for Migrants” on Monday July 8 to commemorate the sixth anniversary of his visit to Lampedusa in 2013. ← Conservative Activist Aims to Enlist 1 Million “Students for Trump” for GOTV Campaign