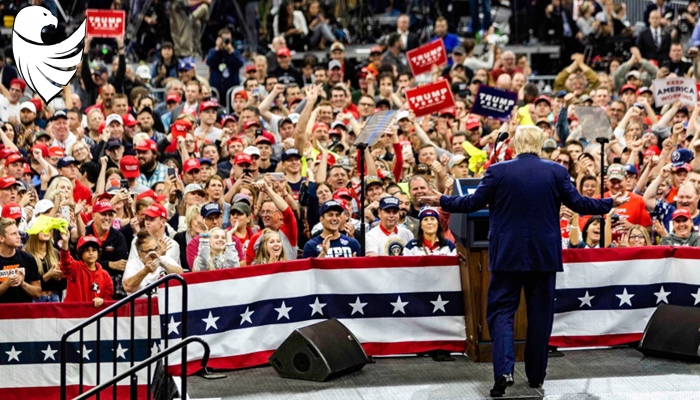 “Wow, thank you Minneapolis, Minnesota—on my way!” Trump tweeted en route to Minneapolis along with a video of the line outside the Target Center.

“To keep America great, we need you to decide right here and right now that Minnesota is going to vote for four more years of President Donald Trump in the White House,” he concluded. “Ladies and gentlemen, I can tell you firsthand President Trump is the real deal.”

Trump then took the stage and began his speech by declaring that “we are going to win this state,” saying the rally felt “like the day before the election.”

“We have 20-plus-thousand people inside. We just set a new record. We have 25,000 people outside,” Trump claimed. “It is great to be back in the Twin Cities with the freedom-loving American patriots who make our country run. For the next thirteen months, we are going to fight with all of our heart and soul and we are going to win the great state of Minnesota in 2020.”

The first topic the president touched on was the American economy, which he believes is the envy of the world.

“America now has the number one economy anywhere in the world and it’s not even close,” he said. “We picked up since the election trillions of dollars in value and China has lost trillions of dollars in value. If our opponent had won that election, China right now would be the number one economy in the world, and right now I can tell you they’re not even close.”

“Our country is stronger than ever before because for the first time in a long time we are putting America first,” he continued as the crowd broke out in chants of “USA.”

Support for law enforcement was a major theme of the president’s speech because of a controversial new uniform policy implemented by the Minneapolis Police Department.

“I have to say there are a lot of very beautiful red t-shirts in the audience. I will tell you what, cops love Trump, Trump loves cops,” said Trump in regards to supporters who were wearing “Cops for Trump” shirts.

Later in his speech, Trump invited Police Officers Federation of Minneapolis President Lt. Bob Kroll on stage along with a number of the officer’s associates.

“My father used to say, ‘never say cops. Say police officers,’” Trump said. “You are so great. You are so respected. You don’t even know how much our public loves you.”

“I think your very weak mayor made a mistake when they took them on,” the president added.

When one protester interrupted the rally, Trump praised law enforcement for quickly removing the demonstrator.

“Man do the cops act fast. He’s already gone,” he said. “I’ve had good service but I’ve never had anything like that. I look up and the guy’s already gone.”

President Trump spoke at length about former Vice President Joe Biden and the impeachment effort launched by the Democrats, whom he accused of “pillaging and looting our country” before he took office.

“Since day one, the wretched swamp has been trying to nullify the election,” said the president. “They want to erase your vote like it never existed. But they will fail because in America the people rule again.”

“It’s a talking point given to these fakers by the Democrats,” he said of impeachment. “So they know they can’t win the 2020 election so they’re pursuing the insane impeachment witch hunt.

“I’m energized because we’re draining the swamp,” he continued.

President Trump said that House Speaker Nancy Pelosi never expected him to actually release a transcript of his phone call with the president of Ukraine—the document that served as the basis for launching the impeachment inquiry.

“They never thought in a million years that I was going to release a transcript of the call,” he said. “She (Pelosi) keeps going anyway because the press is fake and they play right into their hands.”

Trump said he’d “love to run against” Biden in the general election, since he’s “totally owned and totally controlled by the Washington swamp.”

“Joe’s son got thrown out of the navy and then became a genius on Wall Street in about two days. By the way, where the hell’s hunter?” Trump asked, encouraging those in the audience to make “Where’s Hunter?” t-shirts.

“Biden allowed China to rip us off for eight years,” he continued. “The Bidens got rich while America got robbed. Sleepy Joe and his friends sold out America.”

“If you’re dumb as hell you wouldn’t make these deals—they’re so bad. But we’re ripping them up and redoing them,” Trump said of America’s trade deals.“Now that I’m your president America is winning again and we’re respected again as a nation.”

By this point in the speech, President Trump was clearly going off-script, which he acknowledged.

“Isn’t it much better when I go off script? Isn’t it better? So much better,” he said.

The president expressed his anger with the Russia investigation and revealed that it destroyed the lives of many of his young staffers.

“They smear you, they spy on you. They target your family, your friends, your staff,” he said of the Democrats and talked about a female staffer whose “life became hell” because of the investigation.

President Trump then turned his attention to Rep. Ilhan Omar (D-MN-05) in likely the most anticipated moment of the night. He said “Nancy and Chuck” have given control of the Democratic Party to “the radical left, including Minnesota’s own Representative Ilhan Omar.”

“How the hell did that ever happen?” Trump asked. “Congresswoman Omar is an America-hating socialist. She minimized the September 11 attack on our homeland. She pleaded for compassion for ISIS recruits right here in Minnesota.”

“Representative Omar has a history of launching virulent anti-Semitic screeds, whether you like it or not,” he continued. “How do you have such a person representing you in Minnesota? She is a disgrace to our country, and she is one of the biggest reasons that I’m going to win and the Republican Party is going to win in thirteen months.”

He gave a shout out to Powerline writer Scott Johnson for his “great reporting” on Omar.

“The fact is we’re in a struggle for the survival of Democracy in America and the only message these radical socialists will understand is a crushing defeat on November 3, 2020,” the president concluded his discussion of Omar. “We’re going to win this state by so much that people are going to be shocked.”

The president zeroed in on the topic of refugee resettlement toward the end of his speech. The issue is of particular significance to Minnesota because of an uproar in St. Cloud caused by community members objecting to an increase in refugees settling in their community.

“I promise you as president I will give local communities greater say in refugee resettlement,” Trump said. “In the Trump administration, we will always protect American families first and that has not been done in Minnesota.”

“We are keeping terrorists, criminals, and extremists the hell out of our country,” he added. “You should be able to decide what is best for your own cities and your own neighborhoods.”

The president said he has reduced refugee resettlement by 85 percent and told his supporters that the Republican Party believes “cities should be sanctuaries for Americans not criminals.”

Around the 70-minute mark, Trump’s speech took a somber tone when he began discussing the death of American soldiers. He defended his decision to pull out of of Syria and said one of the most difficult parts of his job is writing the parents of deceased soldiers.

“We were supposed to be in Syria for 30 days. We’ve now been there for ten years,” he said. “It’s time to bring them home.”

“The single greatest mistake our country made was going into the quick sand of the Middle East,” Trump said and talked at length about how Christians are some of the “biggest victims of power vacuums” in the Middle East.

Trump began wrapping up his speech around the 90-minute mark and flew through a number of topics before concluding, such as the abortion extremism of the Democratic Party, the renewal of the Iron Range in Minnesota, and the importance of the United States-Mexico-Canada Agreement (USMCA).

Over the next 13 months, we are going to fight with all of our heart and soul – and we are going to win the Great State of Minnesota in 2020! #TrumpMinneapolis #KAG2020 pic.twitter.com/c3FQnrPJWr

Republican Party Chairwoman said in a statement that the rally “was an incredible display of just how much Minnesota supports President Donald Trump.”

“Minnesotans waited for hours, and some even days, for the opportunity to hear from their President who has spent his first term fulfilling campaign promises and working on behalf of Minnesota families,” she said. “The energy at the Target Center tonight is just the tip of the iceberg for what Democrats should expect over the next 13 months. We are excited, we are trained, and we are ready to turn Minnesota red for President Donald Trump in 2020.”