President Donald Trump’s plan to force Mexico to stem the flow of migrants across the southwest border of the U.S. appears to be working.

Border arrests, a metric for illegal crossings, plummeted to 51,000 in August, according to preliminary government figures obtained by POLITICO Wednesday, down more than 60 percent since a peak in May. And border watchers say it’s largely because of an agreement Trump struck with Mexico in June. Mexican authorities, backed by the newly formed National Guard, are now cracking down on migrants traversing Mexico’s southern border with Guatemala, monitoring river crossings and stopping buses carrying migrants from Central America through Mexico. At the same time, the U.S. is making tens of thousands of asylum seekers wait in Mexico while their applications are considered.

The decline in border traffic — if sustained — could amount to a major victory for Trump as he heads into the 2020 election. Perhaps more important, the experimental measures taken by his administration could reshape immigration enforcement for years to come.

“I think that they are getting exactly what they said they would get, by forcing the hand of Mexico,” said Oscar Chacón, executive director of Chicago-based pro-migrant group Alianza Americas. “But the question is, ‘Is it sustainable?’”

The White House and the Homeland Security Department did not respond to requests for comment. But Mexican Ambassador to the U.S. Martha Bárcena told POLITICO that steps taken since June have produced meaningful results.

“People know that if they come into Mexico, they have to respect the Mexican law,” Bárcena said. She added that migrants planning to seek asylum in the U.S. now understand that it’s “not as easy as they were told it was going to be.”

Trump praised Mexico’s actions to reduce the migrant flow in a tweet Saturday that quoted Brandon Judd, president of the National Border Patrol Council, saying Mexico was “stepping up to the plate and doing what they need to do.”

Secretary of State Mike Pompeo and Vice President Mike Pence will meet in Washington Tuesday with Mexican Foreign Affairs Secretary Marcelo Ebrard and other officials to discuss the counter-migration measures, according to Mexican officials.

The Mexico agreement followed threats from Trump to impose across-the-board escalating tariffs on Mexican goods that would likely have resulted in severe economic costs on both sides of the border. When the agreement was announced, it was widely interpreted as a fig leaf that would allow Trump to back down but wouldn’t likely have much impact on migration.

But the deal’s components appear to have contributed to the steep drop in border arrests, according to interviews with six former officials and advocates both for and against greater levels of immigration, as well as a POLITICO analysis of enforcement data.

Border arrests soared through the spring as Central American families trekked north in record numbers. The surge in arrivals overwhelmed U.S. border facilities and ignited a political battle over whether Democrats or Republicans shouldered the blame for the sudden influx, which peaked with 133,000 border arrests in May.

Then arrests fell to 95,000 in June and 72,000 in July. The June and July drops fit a seasonal pattern in earlier years, but the August decline did not. Border arrests have typically increased in August during the past decade.

While Trump’s base is likely to be pleased, advocates for immigrants say the drop in arrests could be bad for asylum seekers.

“What the numbers show is that the United States’ threats and bullying of other countries have been effective in getting other countries to increase their enforcement efforts, but that the numbers don’t reflect any real change in the situation of the Northern Triangle countries of Central America,” said Maureen Meyer, a director for Mexico and migrant rights with the Washington Office on Latin America, a human rights advocacy organization. 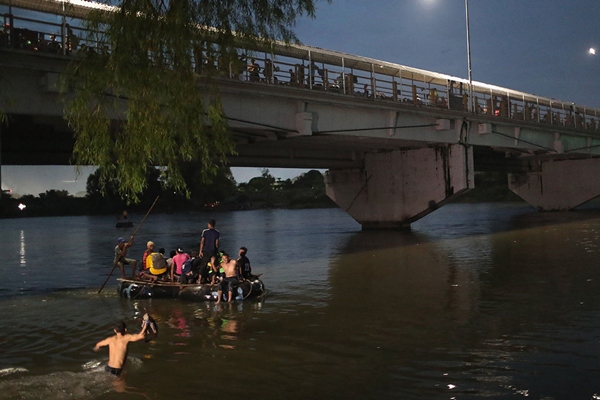 The deal with Mexico focuses on two main areas: heightened enforcement by Mexican authorities and the expansion of “remain in Mexico,” which is formally known as the Migrant Protection Protocols.

After the deal, Mexico’s National Guard established a visible presence along the southern border with Guatemala, including in Ciudad Hidalgo, a small city in the southern Mexican state of Chiapas. The city is bounded to the east by the Suchiate River, a popular transit point for migrants arriving from Guatemala.

“They really have made it harder to cross where people were crossing before,” said Andrew Selee, president of the non-partisan Migration Policy Institute. He called Mexico’s actions an “all-out enforcement effort like we’ve never seen before.”

Mexico pledged in June to devote 6,000 National Guard troops to counter-migration efforts. The country’s government now says it has 15,000 troops at its northern border and 10,000 at its southern border, although those forces deal with a wider range of issues than immigration-related crimes.

Selee, who visited the Mexico-Guatemala border in July, said the Mexican government has made it more difficult for migrants to travel in large groups.

As part of that effort, Mexican officials intensified enforcement in Tapachula, a city roughly 45 minutes north of Ciudad Hidalgo, according to Meyer.

“Particularly in the area around the Suchiate River at the Ciudad Hidalgo crossing, it seems like it is almost impossible to cross in a balsa boat as an undocumented migrant and not get detained by a National Guard agent,” she said. “Leaving the Tapachula area has also become more complicated given enforcement at different checkpoints in the highways around the city.”

Mexican authorities have increased enforcement at highway checkpoints, according to experts tracking the issue. Specifically, they appear to have intercepted more migrants traveling in buses from Guatemala to the U.S.-Mexico border, a method of transport that increased migrant arrivals through the spring.

Todd Bensman, a senior national security fellow with the Center for Immigration Studies, which pushes for lower levels of immigration, argues the crackdown on bus transit played a major role in cutting migrant traffic to the U.S. Bensman is based in Austin, Texas, and traveled to Mexico in August to interview migrants traveling northward.

“Before, you had assembly lines of buses that would fill up down at the Guatemala-Mexico border at different places and drive them in caravans,” Bensman said of the migrant transit route. “Those big buses are now being interdicted at roadblocks and emptied out and turned around.”

In addition, Mexico has restricted access to entry permits that allowed large numbers of Central Americans to enter the country and potentially travel north.

The second main component to the June deal with Mexico was U.S. expansion of its “remain in Mexico” policy. At the time of the agreement, the program was operating in a pilot status and was limited to certain ports of entry and Border Patrol sectors. Since the expansion, the U.S. has sent approximately 42,000 non-Mexican migrants to Mexico to await their hearings, according to an official briefed on recent statistics.

“Now if they win or lose, they’re in Mexico, where nobody really wants to be,” said Bensam. “That’s been a really psychologically effective policy, if the objective of the policy is to reduce the number of Central Americans coming in.”

“Mexico doesn’t have infrastructure to receive these people,” said Astrid Dominguez, the director of the Border Rights Center at the American Civil Liberties Union of Texas.

Mexico regards “remain in Mexico” as a unilateral move by the U.S. government, as opposed to something it agreed to. Still, the administration of Mexican President Andrés Manuel López Obrador has cooperated, and accepted the return of non-Mexican migrants, ostensibly for humanitarian reasons.

“Mexico says MPP was a unilateral decision. They can claim that, but they’re facilitating it,” Dominguez said. “They’re not opposing it.”

A San Francisco-based federal judge initially blocked “remain in Mexico” nationwide in an April order, but the 9th Circuit Court of Appeals reversed that decision in May. The appeals court allowed the program to proceed on a temporary basis, which paved the way for the border-wide expansion under the agreement with Mexico.

At the same time, the Trump administration has powered ahead with other moves to restrict access to asylum.

The Homeland Security Department in July issued a ban on asylum seekers who pass through another country en route to the U.S. The sweeping measure effectively closed off asylum to Central Americans and other migrants traveling through Mexico.

A separate San Francisco-based judge halted the ban nationwide in July. However, the 9th Circuit later limited the scope of the injunction to its jurisdiction in California and Arizona, which allowed the ban to be implemented in Texas and New Mexico.

The “remain in Mexico” policy and third-country asylum ban are just two of many moves the Trump administration has made to restrict asylum and discourage illegal immigration.

A regulation issued in August seeks to allow immigration authorities to detain migrant families together for indefinite periods of time. A federal judge’s order related to the 1997Flores settlement agreement currently limits the detention of children with their parents to a maximum of 20 days.

The regulation will require court approval before it becomes effective, but could provide the Trump administration a powerful tool to discourage migration by Central American families.

“If that survives legal challenge, then the family unit crisis will end permanently,” said Bensman, the senior fellow with the restrictionist Center for Immigration Studies.

The Trump administration’s deal with Mexico and other immigration moves may have reduced crossings in the near-term, but it’s unclear whether it will be a lasting trend.

Alan Bersin, a former commissioner of Customs and Border Protection during the Obama administration, concedes that the Trump administration’s recent moves have driven down illegal crossings.

Still, Bersin blames Trump’s earlier misfires — such as separating thousands of migrant families last year under the “zero tolerance” policy — for squandering resources and exacerbating the migrant crisis in the first place.

“They’re finally getting it right,” he said, “but they’re doing it in an unnecessarily cruel way and they should be held to account for having created the problem in the first place.”