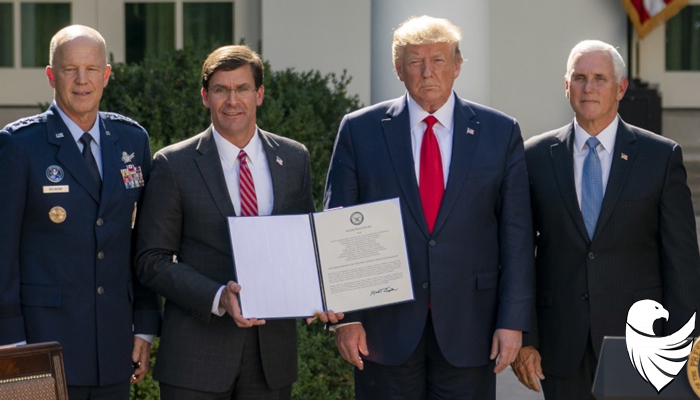 “This is a landmark day — one that recognized the centrality of space to America’s national security and defense,” U.S. President Donald Trump said during the establishment ceremony at the White House Rose Garden.

The military hopes the new command will improve the defense of American interests in outer space.

Space command aims to reorganize and improve U.S. space defenses and technologies, amid increasing aggression from Russia and China.

“Our adversaries are weaponizing Earth’s orbits with new technologies, targeting American satellites that are critical to both battlefield operations and our way of life at home,” Trump said.

Secretaries of defense have long raised concerns about the need for increased defense capabilities in space.

Earlier this year, acting U.S. Defense Secretary Pat Shanahan warned the U.S. military “is not moving fast enough to stay ahead” of rivals China and Russia in space.

He said Beijing and Moscow were creating weapons to “hold American space capabilities at risk,” adding that the U.S. is “not capable of tracking” some of China’s rapid advancements in space weapons, particularly in hypersonic weapons.

Last year then-Secretary of Defense Jim Mattis suggested China’s use of a ground-based missile to destroy one of its own nonfunctional weather satellites in 2007 was a calculated demonstration to the United States of Chinese capabilities.

“We understand the message that China was sending — that they could take out a satellite in space,” Mattis said during a trip to Brazil.

The realm of space hits closer than some may realize, essential to everyday activities from navigation to banking.

Space Command is the military’s 11th combatant command, each tasked with either a geographic mission or a functional mission.

The U.S. military previously had a Space Command, but it was dissolved in 2002, and its functions were turned over to a reorganized U.S. Strategic Command. That command’s primary mission remains a deterrent against global threats, including maintaining the U.S. military’s nuclear arsenal.

Administration officials say re-establishing the command brings them closer to realizing one of the president’s major goals, creating a new military branch to train, organize and equip a force specializing in space defense.

“As a unified combatant command, the United States Space Command is the next crucial step towards the creation of an independent Space Force as an additional armed service,” Defense Secretary Mark Esper told reporters Thursday.

The Space Force would be the first new military branch since the Air Force was established shortly after World War II.

But a future Space Force needs Congress to approve it and fund it, and that hasn’t happened yet.