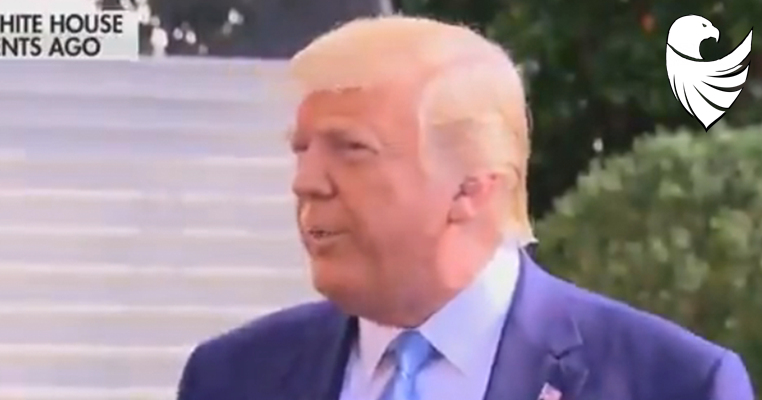 During a presser outside the White House, President Trump claimed the leadership of the left was “petrified” of going against the platforms of the progressive “squad” group led by Alexandria-Ocasio Cortez.

Trump on House Impeachment Vote:
“They all Vote with AOC and Plus Three, Nancy Pelosi’s petrified of them” pic.twitter.com/hicj6PsLuW

Per WashingtonExaminer, Democratic Rep. Alexandria Ocasio-Cortez told constituents at a town hall that she was tired of her party’s current efforts to impeach President Trump, saying it’s only the first step in a broader societal overhaul.

“I think the whole thing is boring,” Ocasio-Cortez, 29, said Thursday at the Queens Library event. “He should have been impeached a long time ago. I’m over it. And so that’s how I feel about it because we’ve got work to do.”

Recently, fellow squad member Ilhan Omar claimed it was Trump that was “terrified” of her.

DailyWire reports President Donald Trump suggested on Friday that House Speaker Nancy Pelosi (D-CA) was compelled to move forward with an impeachment inquiry because she is afraid of defying self-proclaimed “radical” Rep. Alexandria Ocasio-Cortez (D-NY) (AOC) and her so-called “Squad.”

“They all vote with AOC and plus three; Nancy Pelosi is petrified of them,” Trump told reporters outside the White House. “I mean, she’s afraid that she is going to lose her position. Nancy Pelosi will lose her speakership right after the election when the Republicans take over the House.”

Trump’s remarks were in reference to the four progressive House Democrats, dubbed the “Squad,” who have been notoriously critical of the president and the Republican Party, as a whole. The Squad, consisting of Ocasio-Cortez and Reps. Ilhan Omar (D-MN), Rashida Tlaib (D-MI), and Ayanna Pressley (D-MA), have been demanding Trump’s impeachment since any of the quartet were even in Congress.

Pelosi announced that House Democrats would be moving forward with an impeachment inquiry after a whistleblower’s complaint accused Trump of asking Ukrainian President Volodymyr Zelensky to investigate Democratic presidential candidate Joe Biden for using his position as vice president to remove a Ukrainian prosecutor who was looking into his son’s business dealings there.

The reports were not confirmed at the time of Pelosi’s decision and her announcement failed to expressly articulate a single “high crime or misdemeanor” that the impeachment inquiry was based upon. It was not until a day later that the White House released a transcript of Trump’s exchange with Zelensky. After the transcript was made public, many have argued that it failed to show the direct quid pro quo that was initially alleged.