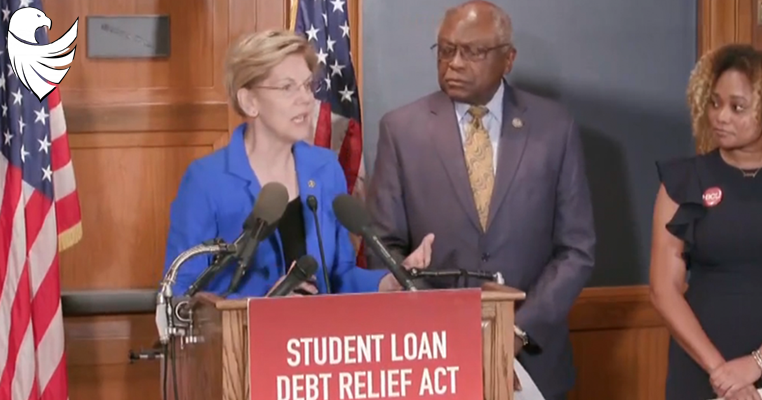 Will the promise of having their student loans wiped out lure millennials into voting for progressive 2020 candidate Elizabeth Warren?

That is what it appears Warren is banking on as she has unveiled details of her plan to cancel approximately $640 billion in student loan debt for millions.

The legislation would cancel up to $50,000 of debt for all borrowers earning less than $100,000 with proportionally less debt relief for those earning up to $250,000

Not everyone was impressed with the plan.

I disagree with Elizabeth Warren’s decision to introduce a bill to cancel student debt. If you owe someone, you should pay. She’s advocating hardcore Socialism which destroys a nation. Assist people? Yes. But don’t encourage irresponsible borrowing. https://t.co/UsDE8zJVL3

I refuse to have my hard earned tax dollars pay for people's poor decisions, greedy colleges and degrees in philosophy etc. This will never happen.

First unveiled in April, the Student Loan Debt Relief Act (which Warren introduced alongside Rep. James Clayburn, D-S.C.) would cancel up to $50,000 in student loan debt for every household with a gross income less than $100,000, roughly 42 million Americans, or about three out of four borrowers.

Outstanding student loan debt has doubled over the past decade, nearing a staggering $1.6 trillion in June. It’s the largest amount of non-mortgage debt in the U.S. and has been cited as a major hindrance in people’s “economic life” by Federal Reserve Chairman Jerome Powell. In fact, according to a study from the NeighborWorks America at Home, 59 percent of millennials knew someone who delayed buying a home because of student loan debt.

“Enough is enough,” the Massachusetts senator said. “I have a plan to cancel student debt for millions of Americans and finally end this crisis.”

Private student loan borrowers would also be eligible for debt forgiveness under her plan by converting their private debt into federal student loans. It would also suspend the collection of student loan payments for a year while the Department of Education carries out the loan forgiveness plans.

Warren’s plan comes on the heels of a similar — but perhaps more far-reaching — plan proposed by 2020 rival Sen. Bernie Sanders, who, at the end of June, rolled out, alongside Reps. Pramila Jayapal, D-Wash., Ilhan Omar, D-Minn., and Alexandria Ocasio-Cortez, D-N.Y.,  legislation that would cancel all $1.6 trillion of student loan debt in the U.S.

Conversely, Warren’s plan would cancel debt entirely for about 75 percent of borrowers, and offer relief to 95 percent.

As previously reported, Warren’s campaign estimated the plan would cost about $640 billion. However, she said that would be paid for the “ultra-millionaire tax” — anyone with more than $50 million in assets would pay a 2 percent tax. For those who have assets valued at $1 billion or higher, it would be a 3 percent tax. It’s projected to generate about $2.75 billion in revenue over the next decade, according to Warren.