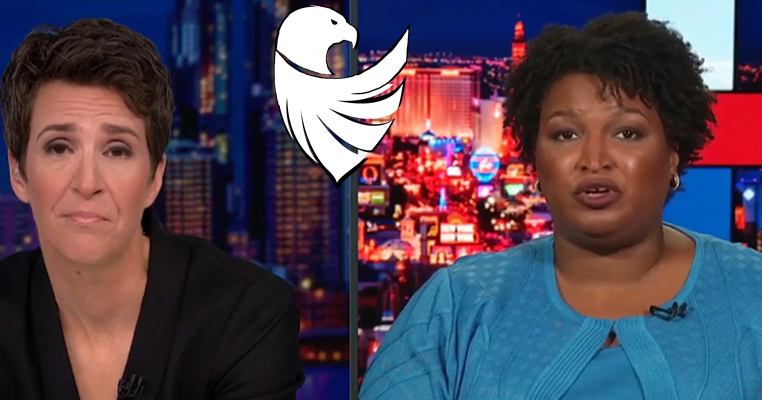 Georgia Democrat Stacey Abrams appeared on Rachel Maddow and claimed “the RNC will be allowed to cheat and lie and go into polling places and scare voters, particularly voters of color.”

Abrams is best known for her failed run for Georgia governor, and then blaming her loss on voter suppression.

TheHill Reported in May, Speaking at the Center for American Progress’s Ideas Conference, Abrams warned that the term “identity politics” had been twisted by those aiming to silence emergent minority voters seeking political power for the first time.

“The notion of identity politics has been peddled for the past 10 years and it’s been used as a dog whistle to say we shouldn’t pay too much attention to the voices coming into progress,” Abrams said. “I would argue that identity politics is exactly who we are and exactly how we won.”

Georgia Democrat Stacey Abrams on Tuesday claimed the Republican National Committee is going to send law enforcement officers into minority neighborhoods to scare them from voting.

Abrams appeared on MSNBC’s The Rachel Maddow Show, where she discussed her new multi-million dollar voter protection initiative. The initiative, which is called Fair Fight 2020, will be spread out across 20 battleground states during the 2020 cycle, and she said it was meant to stop Republicans from “dismantling democracy.”

She went on to say her initiative is going to “educate, staff, and fund” voter protection teams to make sure they are ready to look for the same voter suppression tactics that she claims occurred in Georgia, North Dakota,  Florida, Texas, and Wisconsin.

“We know that we also face foreign influence that is being denied by the White House, by the would-be tinpot dictator of Donald Trump, but also that Moscow Mitch is stopping voter rights legislation and election security legislation,” Abrams said. “But we also know they just lifted a consent decree that’s kept Republicans and the RNC from going into local communities and intimidating voters by having off-duty officers tell people that they are monitoring their votes.”

“For the first time since 1981, the RNC will be allowed to cheat and lie and go into polling places and scare voters, particularly voters of color,” Abrams said. “Fair Fight 2020 is designed to anticipate all those challenges, but not just worry about them, work against them and that’s what we learned from 2018. We cannot wait for the cavalry to come. We have to be the army and we have to stand up now.”