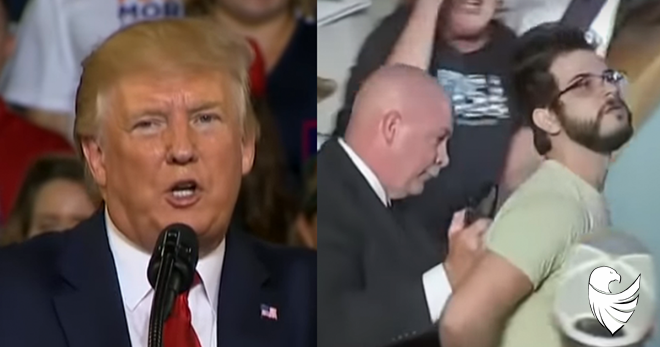 President Trump’s North Carolina rally was interrupted by a protester holding up pictures of the president with Jeffrey Epstein.

Trump teased that the protester was “going home to mommy” as the man was ejected by security.

President Trump mocked a protester who interrupted his campaign rally in North Carolina on Wednesday, joking the man lived at home with his mother.

The young man, who began shouting and waving a piece of paper as the president riffed on Rep. Ilhan Omar, D-Minn., was humiliating his family, Trump told the adoring crowd.

“He goes home now to Mommy and he gets reprimanded and that’s the end,” he said.

“Sorry, Mom, didn’t mean to embarrass you,” the president added, imagining what the man would tell his mother after being evicted from the Greenville event.

Security personnel could be seen leading the man out of the arena with his hands behind his back. At one point, the man whipped his head back to discard the Make America Great Again hat he was wearing.

Prior to the outburst, Trump was in the midst of responding to criticism from the so-called progressive “squad” — who he sparred with earlier in the week on Twitter.

“They’ve gone so far left, no one wants to think about it,” he said. “Representative Omar blamed the United States for the terror attacks on our country, saying terrorism is a reaction to our involvement in other people’s affairs,” he said.

Trump claimed Omar was “minimizing” the September 11 terror attacks by remarking in an interview, “some people did something.”